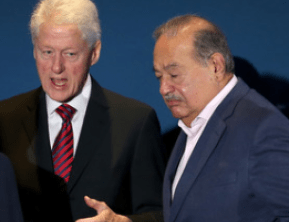 A trusted source informed me today as follows:
“We heard from our Washington, D.C. source… He says discussions are ongoing between the Carlos Slim Foundation and the Clinton Foundation about a multi-million dollar payment being negotiated or already negotiated. Possibly, it is to be added to an amount previously contributed and increased now due to the severity of the situation.
“This is said to be a back-room deal to buy away the threatened indictment of Emiliano Salinas by U.S. DOJ prosecutors in the NXIVM criminal racketeering case,” says the source.
Possible US federal crimes, committed by Emiliano Salinas, the son of former Mexican president Carlos Salinas, are being investigated by more than one US federal agency, Frank Report revealed in the past.
A pending indictment of Salinas is said to be on the table at this very moment, said my source today.
The source added, “It is coming down to the last moments before the indictment may be handed down. The discussions are said to be intense. Some believe the Clintons can control DOJ outcomes at the highest levels, [i.e. Main Justice in Washington DC] yet, at this moment, more heat is on the Clintons than ever before due to so many scandals already revealed in the press.
“One of the points of contention in the discussions is  – if the donation is made to the Clinton Foundation by Slim  – can the Clintons deliver enough influence peddling to guarantee the indictment will be withheld? It is unknown what $$ amount may be in play or may have already changed hands between the Slim Foundation and the Clinton Foundation regarding this matter.
“This information is from a reliable DC source who proved to be correct with past tips. He was on the money with timing and fully reliable information in the past. This individual is [a federal elected official] with deep ties to federal law enforcement.“
**
To clarify: my source is not an official or employee from the Eastern District of New York Department of Justice.  To further clarify —  I have never spoken with anyone in law enforcement in the Eastern District of NY.
For my own part, I suspect that the EDNY is set to indict Emiliano Salinas, but likely needs Main Justice approval. That approval may or may not be contingent on money being paid to Clinton by Slim.
Unlike other presidents, Donald Trump, for reasons unknown, does not lead or control his own DOJ. Every other president in recent history took control of the DOJ – shortly after assuming office, something which by law the president is entitled to do.
Trump failed to appoint his own people at any of some 90 top positions, including most of the US Attorneys – something I don’t think any president ever did before.
One of the few of the 93 US Attorneys Trump did appoint – was Richard P. Donoghue – US Attorney for the EDNY – the district which indicted Keith Raniere and other NXIVM leaders.
In almost every other district, Trump did not appoint his own US Attorney but merely fired the Obama-appointed US Attorney. Then, instead of appointing his own politically-aligned person, Trump allowed the Deputy US Attorneys – who had just served under the Obama appointed US Attorney – to assume the role of acting-US Attorneys.
This put bureaucrats – as opposed to political appointees – in basic – almost nationwide control of the DOJ.  Whether that is good or bad, I make no judgment – except that it is a 100 percent departure from every president before him.
Obama quickly removed all US attorneys appointed by his predecessor, Bush  – just like Bush did before him, as did every other president before him – and replaced them with his own appointees. No president I know of simply fired the previous president’s appointees and, by default, allowed Deputy US Attorneys – who may be loyal to the previous administration – to head the offices.
In addition, as a sign of lack of leadership, Trump chastised his own appointed Attorney General, Jeff Sessions, [instead of replacing him] and seems to tolerate his Deputy AG, an appointment the president controls, Rod Rosenstein, who by recent accounts is leading the quest for his ouster.
A competent, intelligent, politically savvy president such as Obama, Bush, or Clinton would certainly fill their own presidential appointments with people who support him or at least not with those who want him indicted or impeached.
This unique departure from presidential protocol may ultimately lead to Trump’s ouster. It also lends credence to my source’s contention that Clinton – ergo Democrats  – can control DOJ outcomes.
Finally, it is worthy of note that the liaison for the Carlos Slim Foundation with the Clinton Foundation is reportedly the former mayor of Nogales, Arizona, and “Arizona Mafia” member Marco A. Lopez Jr.
Source: http://www.valledelsol.com/marcolopez/
Lopez reportedly met with former President Bill Clinton, and Carlos Slim in Mexico, in March 2018.
Keith Raniere a.k.a. “Vanguard” was arrested in Mexico on March 25, 2018.

Former Insider: If anyone could, Barbara Bouchey could deprogram Allison Mack
A Tale of Two Women: Catherine Oxenberg’s birthday – and Sara Bronfman sued – both in Times Union today!
Comment