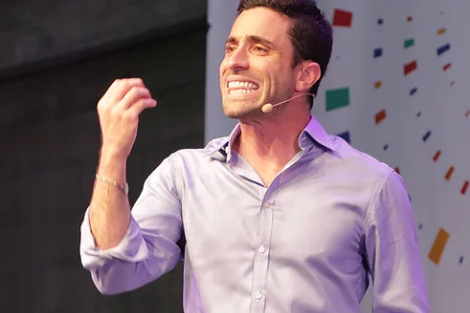 It is not known if NXIVM member Marc Elliot is still recruiting for NXIVM.
His website suggests that he may be.
He was called before the grand jury some months ago to testify about his involvement in the NXIVM cult.
Here is what he publishes about himself on his website:
‘Marc Elliot knows the importance of embracing our differences. Born with a rare disease that left him with virtually no intestines, he faced extreme adversity and overcame tremendous odds from day one. But that was only the beginning of his remarkable journey. At age nine, he was diagnosed with a neurological disorder called Tourette’s Syndrome due to his incessant vocal and motor tics that interfered with every aspect of his life. It is estimated he ticced around 25 million times and every medical professional concluded his condition was uncontrollable and incurable. Not being one to bend to statistics, Marc completely overcame his Tourette’s in 2013, drawing from innovations in emotional intelligence, using only mind over body, and sheer will.”
***
Marc is offering his services as a consultant and inspirational speaker. He has publicly credited NXIVM for curing his Tourette’s Syndrome, so it stands to reason – based on the above – that he will tell those he consults and speaks before – should he get any offers – about NXIVM – and how its tech is so powerful that it cures diseases.
Ergo, he is likely still recruiting for NXIVM.
One of his main speaking topics – Guilty Until Proven Innocent – also suggests he is pro NXIVM and this represents his view of what is happening to NXIVM and Keith Raniere.
Here is how Marc describes it:

Cultivating Kindness and Critical Thinking In a World That

Over the last decade, Marc has touched audiences all over the country by sharing his life story and imparting messages of inclusion and learning to embrace adversity. In a world with increasingly divisive attitudes, he hopes to inspire a conversation that fosters tolerance, compassion and a renewed faith in our ability to grow better together. Marc is now bringing his powerful and educational presentation, “What Makes You Tic?” to businesses and organizations worldwide to inspire more cooperation and understanding within the workplace and, ultimately, the world.

NXIVM is not dead. It may be bruised and ailing. It may be on its last legs, but there are some who want it to survive and rise again. Marc Elliot may or may not be one of these.

Is he entirely to blame? He thinks NXIVM cured his disease. Who wouldn’t be loyal? But one has to wonder if the disease was really cured – if it was cured at all – by something within him.

He only wants to credit his Vanguard.