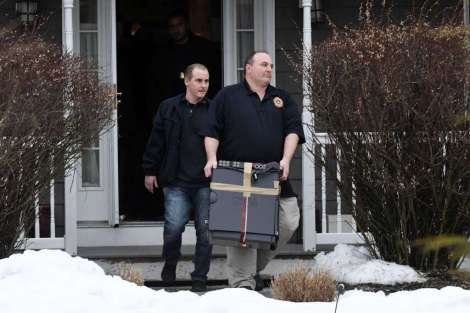 The Albany Times Union reported yesterday on the FBI’s work to sift through the discovery in the NXIVM case and noted that the Justice Department has “hired an outside vendor to help the FBI sift through a virtual mountain of data.”

The data is contained on computer devices seized in March from the home of Nancy Salzman on Oregon Trail and the “sex lair” of Keith Raniere on Hale Dr.

Federal prosecutors estimate the computer devices contain up to 12 terabytes of data.

Raniere’s attorneys say that much of it is videos – and videos take up a lot of space.

Prosecutors noted that a U.S. Circuit Court in Manhattan characterized one terabyte of data as being the equivalent of “12 library floors’ worth of books.”

Hence, 12 terabytes would be 144 library floors – if the documents were all written.

With videos, it is somewhat different. But let it suffice to say, there are probably more videos for prosecutors to review than the sum total output of Paramount, Warner Brothers, and MGM.

But possibly not as interesting featuring as they do one very winsome star of most of the films, a short, rather pudgy, cross-eyed leading man.

Slowing up the entire process is that the prosecution in reviewing these terabytes of seized documents and videos is that they must place attorney-client privileged records into a “firewall database,” where they are being reviewed by law enforcement officials not involved in the investigation.

So, what’s so hard about that?

Because it’s not like yours or my computer being seized where there are one or two attorneys covered by privilege. I kid you not: Raniere has identified 26 attorneys that prosecutors must be wary of in sifting through the documents, Nancy Salzman has identified 7, and Clare Bronfman has identified 42. That’s 75 lawyers – not counting the 24 or so lawyers representing the various defendants in this case.

As some have said in the past, Executive Success Programs really work — for lawyers.

Some of the computer devices, we learn, could not be searched “for technical reasons” and were sent to the FBI’s headquarters for analysis, prosecutors said in court filings.

In addition to computer and other electronic devices such as data-storage devices, cameras and mobile phones, when FBI agents raided Nancy Salzman’s Saratoga County residence six months ago, the Times Union reports, “they also seized more than $520,000 in U.S. currency that was stuffed in bags, envelopes and shoeboxes, including one shoebox that held more than $390,000, according to search warrant records unsealed this summer in response to a request by the Times Union.”

On the same day, March 27, Raniere’s private sex lair was also raided and “audio-video recording equipment, a box of unidentified white pills, computer storage devices, binders, VHS tapes, and a book titled “History of Torture”, were seized along with other items, according to the TU report.

Federal prosecutors, in their letter to the district court on Monday, noted – ominously for the defense – that they are still receiving information from outside sources.

Raniere had handbook on torture in his library; imposed tortures on women
Shadow State: Nicki Clyne’s Tweets show she is not ready to flip
Comment