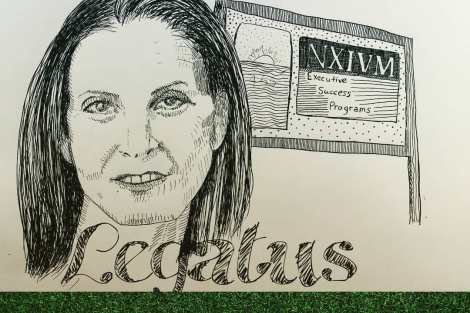 In response to her lawyers’ request, Judge Nicholas Garaufis has modified Clare Bronfman’s conditions of release, giving the heiress permission to stay outside of her home for an extra 30 minutes per week.

Her lawyers asked she get the extra half-hour outside her luxury Manhattan apartment where she is confined to home detention as part of the conditions of her $100 million bail – so she could do a little more exercising and grocery shopping.

She is required to wear an ankle monitor at all times.

Bronfman’s previous terms of release included permission to leave her apartment three times weekly for 90-minute sessions which could include exercise and grocery shopping.

Bronfman is a regular jogger and, before her arrest, would jog 30 miles per week and compete in half marathons.

Now, during one of her three 90-minute outings per week, she will get an extra half-hour – or a total of 120 minutes [two hours] out of the house at a stretch.  The other two outings per week will remain limited to 90 minutes each time.

All told, the rail-thin heiress who loved perjury and trying to get enemies imprisoned – will get a full 5 hours out of the house each week.

The sullen heiress who once had it all – but chose instead to “live by the sword” of the court system – spending an estimated $50 million on lawyers prior to her arrest to crush her opponents – sometimes outspending them by millions of dollars – is now forced to spend millions defending herself and not doing so well so far.

Both the Prosecution and Pretrial Services consented to this requested modification – provided the litigation-loving heiress coordinates the specifics of her whereabouts at all times during the 120 minutes with her Pretrial Services Officer.

Yesterday, the judge granted the motion. It reads as follows; “On one day each week, Bronfman is permitted to leave her residence for 120 minutes (instead of 90 minutes) for exercise and shopping for necessities. Before leaving her residence, she must provide advance notice to Pre-Trial Services. All other conditions of her release remain in full force and effect. Ordered by Judge Nicholas G. Garaufis on 9/26/2018.”

The emaciated heiress – known also by the appellation “Legatus” – is believed to be paying the legal fees for her master, Keith Alan Raniere A/K/A The Vanguard, and the other four co-defendants’ as well as her own.

She follows Raniere’s guidance in all things, substituting his brain for her own on all matters of importance. She is a vegetarian and restricted to 800 calories per day, based on the teachings of her glorious Vanguard.

This is a most judicious requirement on the part of her lordly leader, Raniere – who always eats as much as he likes – since it keeps women docile and somewhat confused since food deprivation tends to work in that fashion most admirably.

Bronfman, who has been accused of money laundering, extortion and other crimes for her high-ranking role in the NXIVM group, which prosecutors say masqueraded as a self-help and empowerment organization, will now get an extra half hour – which she can spend at the grocery store – there to find zero calorie squash, celery, plain yogurt and sugarless gum for dessert.

Click here to post a comment
Tonawanda and Grand Island Communities Mobilize After Tonawanda Coke is Found Guilty of Breaking Their Probation and Sentenced in Federal Court
Update: Dr. Roberts NOT cleared by New York State – because she has not been charged with misconduct – will likely KEEP her medical license