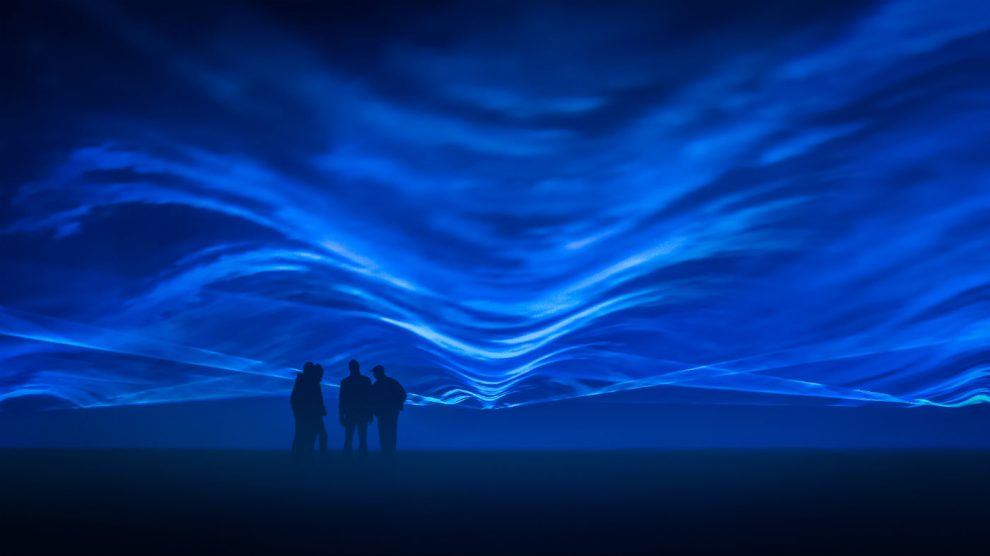 WATERLICHT, the signature piece of The Bentway’s fall public art exhibition, If, But, What If? is a dream landscape created through the imaginative use of LEDs, special software, and lenses, designed by acclaimed Dutch artist Daan Roosegaarde.

Larger-than-life, cascading waves of blue light will soar underneath the Gardiner Expressway, simulating a virtual flood and illustrating the universal power and poetry of water. Due the unique nature of the installation, WATERLICHT can only be viewed after sunset, 7pm-11pm, Friday October 12 – Sunday October 14, 2018.

The commission of WATERLICHT presents The Bentway with the opportunity to foster a city-wide conversation about the importance of clean water, environmental responsibility, and climate change. Working with numerous partners, additional programming includes:

With the support of Ryerson Urban Water Centre, Great Lakes Water Works, New College and Waterlution, The Bentway is recruiting Water Ambassadors who will be on-site and ready to answer questions, encourage conversation, or identify additional resources about the layered history of the Bentway site, its relationship to the waterways, the Lake’s ecology, and environmental threats facing the Lake now and in the future.

Paired with Roosegaarde’s own words about the installation, three local contributors, each with a long relationship with Lake Ontario, have recorded their own personal stories forWaterlicht Radio – waterlichtradio.com. Contributors include, Nancy Rowe, the founder of Akinomaagaye Gaamik Lodge and a member of the Great Lakes Guardians’ council,Angus Armstrong Harbour Master Emeritus for PortsToronto, and Madhu Nagaraja, an avid long-distance swimmer and a founding member of the Great Lakes Open Water Adventures. They discuss their perspectives: shared ethics and values for the water; ecological changes and challenges; and how to protect Lake Ontario for future generations.

On October 13 from 1-2:30pm at Jackman Hall, The Bentway partners with the AGO forOn Water, a free panel discussion between a number of artists and scholars who are exploring water as a medium as well as social, environmental and economic issues that threaten water resources, including Daan Roosegaarde, Assistant Professor James Miller (Faculty of Design, OCAD University), and filmmaker  Lisa Jackson (Biidaaban: First Light VR )to be moderated by water activist Sarain Fox.

If, But, What If? explores what could be, what should be, and what may never be, in the ever-evolving city of Toronto. In addition to WATERLICHT, If, But, What If? consists of seven other works.

The Bentway reimagines the forgotten lands under the Gardiner Expressway as a unique new artist canvas, cultural attraction, and gathering place for Toronto with accessible, participatory and responsive programming at the intersection of art and urbanism. Through art in the public realm—rotating, site-specific, and thoughtfully-curated—The Bentway explores Toronto’s changing urban landscape as well as the opportunities and issues that unite cities across the globe. “If, But, What If?” runs until November 30, 2018.

Once a week in October special guests; artists, designers, planners, community members and active urbanists, will guide art tours, reflecting on the artworks, on The Bentway’s layered histories and potential futures, as well as on the city itself. The tour leaders will lead participants throughout The Bentway and interpret the site and works based on their own expertise and interests.

Tours take place each week in October, from 6-7pm:

THE BENTWAY presents
If, But, What If?
Fall Public Art Exhibition
Daily until November 30, 2018

The Bentway Fall Season is supported by the City of Toronto and the Ontario Cultural Attractions Fund, and the Ministry of Tourism, Culture and Sport.

The Bentway’s Waterlicht is powered with 100% green electricity thanks to Bullfrog Power. Bullfrog Power gives Canadians a renewable energy choice, allowing homes and businesses to take action against climate change and create a cleaner, healthier world.