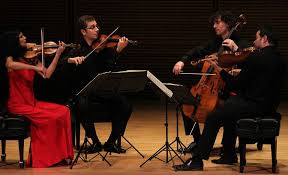 BUFFALO, N.Y. — The University at Buffalo Department of Music and The Buffalo Chamber Music Society are pleased to present the Belcea Quartet in concert on Tuesday, October 16, 2018 at 8:00pm in the Mary Seaton Room in Kleinhans Music Hall, and on Wednesday, October 17, 2018 at 7:30pm in Lippes Concert Hall in Slee Hall.  The quartet was founded at the Royal College of Music in London in 1994, and is based in Great Britain. Buffalo is one of a select number of United States stops the group is making on its current tour, along with Carnegie Hall in New York and The Philadelphia Chamber Music Society.

Tickets for Tuesday evening’s concert in The Mary Seaton Room

UB Music Department concert tickets will be available through a variety of outlets this year.  The least expensive and easiest way to purchase tickets is online at www.ticketfly.com.  For those wishing to obtain tickets in another manner, there are options according to the following pricing structure:

$22 in person at the door (one hour before concert time)

$17 in person at the door (one hour before concert time)

All UB students with a valid ID will receive one complimentary ticket to all UB Music Department events.

ABOUT THE BELCEA QUARTET

Founded at the Royal College of Music in London in 1994, the quartet is based in Great Britain. However, the Romanian violinist Corina Belcea and the Polish violist Krzysztof Chorzelski, the two founding members, bring a very different artistic provenance to the ensemble while drawing from the best traditions of string quartet playing received from the quartet’s mentors: the members of the Alban Berg and Amadeus Quartets.

This diversity is reflected in the Belcea Quartet’s repertoire. Regular world premieres go hand-in-hand with its profound connection with the great works of the Classical and Romantic periods. The quartet’s open-minded approach to music invariably enables it to find its own unique, elegant and refined interpretations of the main string quartet repertoire.

Beginning with the 2017/18 season, the Belcea Quartet is the Quartet Artist-in-Residence at the new Pierre Boulez Saal Berlin. The quartet has also shared a residence at the Wiener Konzerthaus with the Artemis Quartet since 2010.

The musicians recently created their very own Belcea Quartet Trust, whose main aims are to support and inspire young string quartets through series of intensive coaching sessions organized according to the needs of each selected ensemble, as well as to support commissioning of new works from today’s leading composers to be premiered by the quartet in the future.

The Belcea Quartet has an impressive discography, having garnered at least one Gramaphone Award, and having been nominated multiple times.  In addition to recordings of the complete Britten and Bartoìk quartets as well as works by Schubert, Brahms, Mozart, Debussy, Ravel and Dutilleux, on the EMI lablel, the quartet recorded the complete Beethoven quartets live in the Benjamin Britten Studio in Snape in 2012/13.  This recording was released under ZigZag Territories, the quartet’s new label. In 2015, the quartet released its highly acclaimed recording of works by Webern, Berg and Schoenberg to coincide with its 20th jubilee. September 2016 saw the release of the quartet’s recording of the complete Brahms string quartets & piano quintet, a CD acclaimed by the press and awarded with a Diapason d’or of the year 2016. The Shostakovich album, including the 3rd string quartet and the piano quintet with Piotr Anderszewski, was released in April 2018.

The Belcea Quartet’s performances of the complete Beethoven string quartets at Vienna’s Konzerthaus in 2012 were broadcast by Mezzo TV and were released – on DVD and Blue Ray disk – by the label Euroarts in fall 2014. The release was accompanied by Jean-Claude Mocik’s documentary of the entire project, “Looking for Beethoven”.