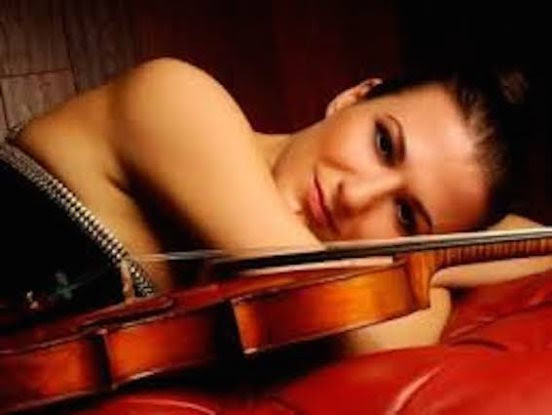 In a profession packed with talent, once in a while someone very special comes along and changes the way we connect with music – Alda Dizdari, the distinguished Albanian born British violinist, has been described as a “phenomenon”, compared to George Enescu, and Yehudi Menuhin. Thisweek she received huge public endorsement from the Sunday Times and the BBC.

Despite her busy concert schedule she found the time to put down her bow and take up a pen to write a book about her guiding passion, Elgar, titled ‘Kiss Me Again – A Memoir of Elgar in Unusual Places’ it describes her three year journey into Eastern Europe to introduce this most English of composers to new audiences. It is worth noting that her reception and that of the music was sensational.

A very special event is now planned to take place on the 14th of October when Alda Dizdariperforms Elgar’s Violin Concerto with the Southbank Sinfonia in the Cadogan Hall to mark the completion of a three year journey taking the work of Elgar through Eastern Europe.

Her book will be launched at the time of the concert. To add to the importance of this occasion, the conductor Alexander Walker, who has journeyed with her, will be presented with the Elgar Medal, the prestigious award previously held by Sir Colin Davis, Sir Mark Elder and Daniel Barenboim.

Alda describes how her personal passion for Elgar began: “It all started in a vintage record shop near Oxford Street where I came across a recording of Elgar’s Violin Concerto with Albert Sammons and Henry Wood conducting the New Queen’s Hall Orchestra.  I was going through an exploratory phase of listening to old recordings, trying to capture the sounds and gestures that are lost to the modern performer and I thought this would be an interesting start to discovering this work performed more authentically by people that knew Elgar personally. On the same day I found myself in Cecil Court, in another shop that sold old scores and as if in an act of faith I found a copy of Elgar’s violin concerto that once belonged to Henry Wood. The violin part was completely virgin but the piano part was heavily marked with his blue pencil. All the tempo markings, dynamics were circled and the timing for every movement clearly notated. I couldn’t believe my eyes. There was a clear serendipity to all this. I bought the score although quite a dear purchase, and the rest was already settled. What followed were two years of discovering the piece, of listening to recordings and looking for opportunities to perform this work.”

Now a British citizen, Alda was born into a family of musicians and left her native Albania from an early age to pursue her career in music. She studied in Romania with distinguished soloists and received a Bachelor Degree from the University of Bucharest. She continued her Master Studies at the University of Illinois in USA and her Advanced Instrumental Studies in London, at the Guildhall School of Music and Drama with David Takeno where she also held for two years the prestigious Leverhulme String Fellowship.

In 2008 she was appointed Musician in Residence of The Wapping Arts Trust with HRH Princess Michael of Kent as Patron.

Apart from being known for her virtuoso violin performances, Alda has founded DEA MusicAcademy, who’s philosophy is “A Conservatoire Tradition with a Community Feeling” offering children from the Borough of Southwark, some from underprivileged backgrounds and learning difficulties, the opportunity to have music lessons at the highest standard normally only available in such environments as the Purcell School and the Junior Royal Schools.