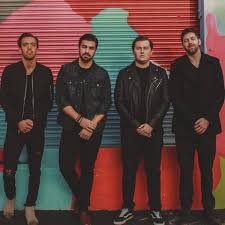 City on Down
“All on You” – https://www.youtube.com/watch?v=LaPcQ4PmkOE
City on Down is a 4-piece Pop/Rock band from Charleston, South Carolina that draws comparisons to bands like The 1975, Imagine Dragons, Coldplay, U2, X Ambassador and more. Combining organic sounds with modern-day electronic production, they bring an incredibly fun and high-energy performance to every crowd. They drew over 700 people to their “Used to Be Young” EP release show in April at Music Farm Charleston, and have clearly developed a following among the college and young 20’s age demographic. The band recently completed a Southeast tour May 17-24 in cities including Nashville, Atlanta and Charlotte. The band is planning a Northeast US tour in late October, and will be headlining at the Charleston Music Confab in September. City On Down was just awarded Upcoming Alternative Band and Single of the Year for 2017 at the Independent Tone awards in Charleston. The band’s hit single “All on You” has over 100,000 streams within just the past few months.