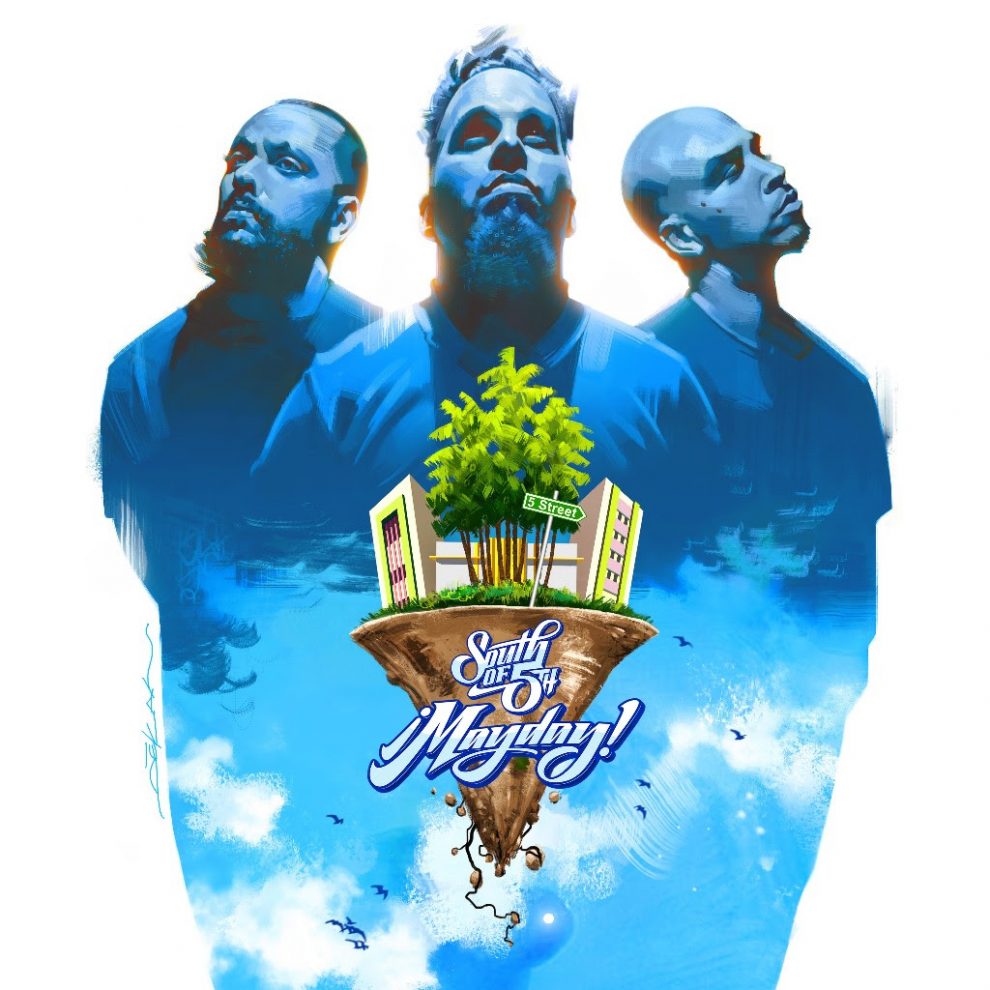 (Miami, FL) — When you picture Miami you might imagine the hot white sand beaches, baller poolside events, set against a skyline of glass skyscrapers, or maybe it’s the inner city streets that flow to an unheard riddim, back dropped to vibrant color buildings, and kids just hanging out in the heavy humid air.  A unique city with a blend of Caribbean cultures meets beach town USA, a place where you can feel the island energy pulsing through the city. It is this melting pot of diversity where the genre bending group, ¡MayDay! calls home, and it’s not hard to hear ¡MayDay!’s tribute to their city, Miami, on their newest album. South of 5th recently came out on September 7th on tastemaker imprint Strange Music.

When ¡MayDay! set out to make this album, they envisioned their ultimate summertime beach playlist for their favorite locals only beach South of 5th and included a flare of the island vibes. The new album’s 13 tracks are a carefully curated and takes the listener through the skank and ska riddims of the Caribbean all while maintaining ¡MayDay!’s signature blend of Boom Bap Hip Hop, Pop, Rock and R&B.  An album that will easily be at home with the Cali Reggae fans as well as hip hop fans alike.

¡MayDay! knew that they were going to release a reggae influenced album when they first signed to Strange Music back in 2009. But the seeds for the album were really planted when ¡MayDay! toured with the reggae rock band Dirty Heads in 2016. The tour was met with love and appreciation as the audience embraced ¡MayDay! and left the group inspired. And it all came together when they met up with Common Kings on tour last year — they immediately knew South of 5th was the next album.  South of 5th  has no doubt put ¡MayDay! in the forefront of their genre and created something unique and amazing for these hot, hot summer days.

Album standouts include “Next to Go”, the first single released, the song is set against a ska/reggae beat, and has MCs Bernz and Wrekonize inspired by the feeling of uncertainty, which exists in life and careers. They rap about the freedom you have when you acknowledge and accept the uncertainty of life by choosing to live your best life. The second single released from the new album will be “Time is Up” featuring Stige, who is part of the ¡MayDay!’s Miami family. For ¡MayDay!, “The world is full of naysayers. Full of people who want to tell you what you can’t or won’t do. We wanted to create something for those fighting against the doubters and the clock. This one is for when you’re against the current and only you know what they don’t, the time is up.“ And “We Ain’t Sleeping” features another brother from the Miami family, Danny Acosta, who sings about the qualities of a good drinking pal, a reggae inspired track that asked, stay with me until this is done, we ain’t sleeping till it’s over.

A notable standout is “Run Up” featuring label mate and Strange Music owner Tech N9ne. It is the beach version of the classic M.O.P. “Ante Up,” with a lesson to be learned so listen up — MCs Bernz and Wrekonize warn, “DON’T GET OFF ON THE WRONG EXIT. In a city as beautiful as Miami, even in the fun & sun, one must stay aware of their surroundings.” Tech N9ne joins the crew and spits about the rudeboys and stick up kids that lurk about in twilight hours all to an upbeat skanking riff.

Closing out the album, is “Close So Far” featuring, Grammy nominated, Common Kings. Laying down the tracks of this song was one of the most memorable sessions of the album for the group. ¡MayDay! recalls, “They called us with no warning saying they had 24 hours in town and wanted to get into some vibes. Needless to say, we all rushed to the studio and basically threw a party. So many people in the room it was hard to know who did what! In the end, what came from it was a really beautiful song.”

The new album was recorded at ¡MayDay!’s legendary recording studio in Miami’s Little Havana at Poppa’s House Studios, where they’ve produced and recorded the last 5 albums. The location catches all the electricity and vibes that Miami has to offer, a unique imprint that is left on every album. Additionally, over the last few albums ¡MayDay! has been blessed to work with a great group of collaborators and artists who come and help them channel and create magic. For South of 5th, they worked with a few of those greats including producers The Pushers, Llamabeats, Michael “Seven” Summers, and a local producer from Miami, Frankie A. Vasallo.  They also add back the horn section, a throw back to their collaboration with Murs.

The South of 5th release will be followed by a national and international tour, which kicked off with a record release party in Miami at the Blackbird Ordinary on September 8th. True to ¡MayDay! style, live shows will be the party of the season. ¡MayDay! promises, “we always like to keep people dancing at our shows. We’ve retooled our shows from the past few years to include a little bit of everything from our entire catalog.”

Shows will include tiered pricing with pre-order VIP options. Pre-order VIPs will receive a stack of ¡MayDay! merchandise, the new album, and VIP treatment, and pre-show meet and greet at your show of choice. Plus ¡MayDay! will be choosing up to 20 lucky pre-order VIP package purchasers to pre-game with the group before their show. The tour will track from Southeast to west and Northeast, and hitting a few Canadian cities before heading overseas. Check full tour dates below and here.

Until then, you can find ¡MayDay! chillin’ South of 5th!