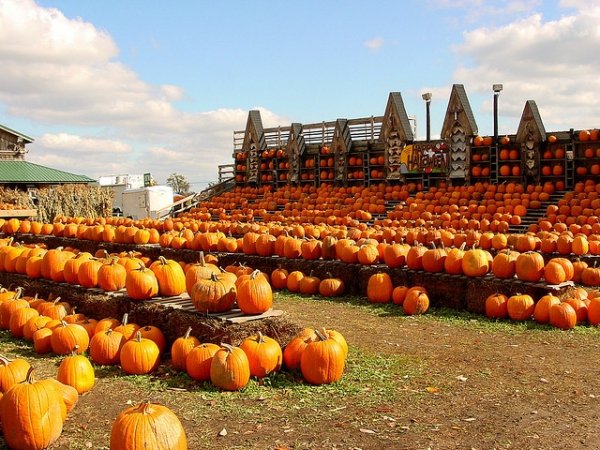 The World Pumpkin Pie Eating Competition is a favorite with fans and contestants because hands cannot touch the actual pieces of pie, only the paper plates. And the stakes are high, as contestants try to beat the current world record to gain the glory of taking their place in history as one of the country’s greatest “All Around” competitive eaters, along with the title of “World Hands-Free Pumpkin Pie Eating Champion.”

Schuyler, who is currently ranked the #1 Female Independent Competitive Eater in the World (according to her Facebook page) has won this competition the last four years – what will happen this year? Find out this weekend! Prizes totaling $1,800 will be awarded, including the $1,000 grand prize.

Other special attractions at the Fall Festival this weekend include:

Wild Bull Rides! Take your chances with a wild ride on the mechanical bull, available weekends through October 28. Just $5.00!

Zombies in the Cornmaze Several zombies will be wandering around in the cornmaze from noon to 4:00 p.m. both Saturday and Sunday. Will you get infected? $6.00 per person (there’s a $1 coupon with paid Festival admission)

In Jest Juggling & Comedy Show Comedy, juggling and family fun! Show times are 1:30 & 3:00 p.m. on Saturday (only) (in the Entertainment Building)

Live Music in the Witches Brew Bar (indoors or outdoors, depending on weather) includes Russ Vesci Texas Revolver on Saturday, October 13 and High Horse on Sunday, October 14; 1:00 p.m. to 4:00 p.m.

Funny Faces Drawing Contest Kids ages three to 14 can compete for prizes in several categories on Saturday and Sunday from 11:00 a.m. to 4:00 p.m.

As with every year at this annual fall attraction tradition, there’s something for everyone, including amusement rides; mechanical bull rides; hayrides; cornmaze; the pumpkins and mum patch; pumpkin cannon; shooting gallery; homemade donuts, pies, cookies and pastries; Halloween decorations and special events, such as the World Pumpkin Pie Eating Contest, the Trebuchet Contest and Oinktoberfest, New York State’s BBQ Cook-off – and so much more!

What you need to know about the Fall Festival:

(children two and under admitted free)

Discounted tickets are available at all Buffalo and Rochester Wegmans

Great Pumpkin Farm:   The Great Pumpkin Farm is open weekdays from 10:00 a.m. to dusk through Wednesday, October 31 (closing time October 31 is 5:00 p.m). There is NO admission on weekdays. The Pumpkin Palace is open and features Halloween decorations, a bakery and candy store as well as the Witches Brew Bar & Cafe. Guests can purchase pumpkins; cornstalks; gourds and cider. There’s also a petting zoo, hay maze and playground. Group tours are also conducted during the week.

The 2018 Fall Festival Guide is available at all Wegmans locations or online at http://www.guide.greatpumpkinfarm.com

About the Great Pumpkin Farm and the Fall Festival

Since 1996, when it first hosted the World Pumpkin Weigh-off and was included in the Guinness Book of World Records for the first 1,000-lb. pumpkin, the Great Pumpkin Farm in Clarence, New York has grown. Its annual Fall Festival is Western New York’s largest fall family event in the region, and includes popular events such as OINKtoberfest, New York State’s Official BBQ Cookoff; the Pumpkin Trebuchet competition and the Pumpkin Farm Olympics. For more information on the Great Pumpkin Farm and its Fall Festival, visit www.greatpumpkinfarm.com.