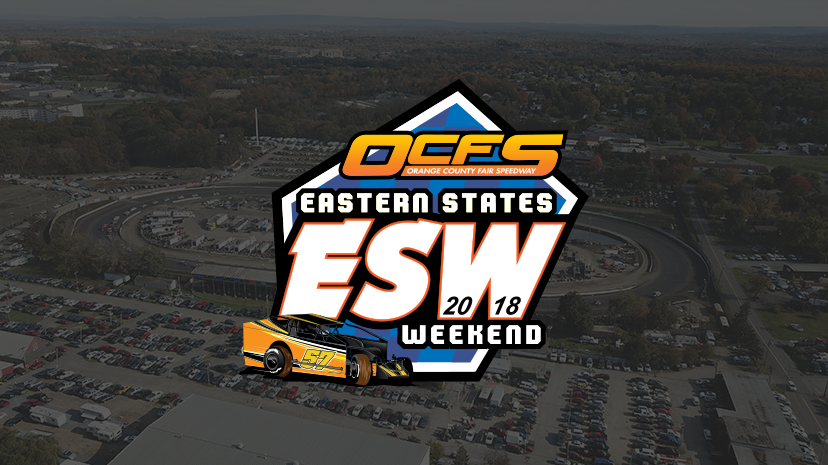 [MIDDLETOWN, NY, 10/10/2018] – For the last 57 years, Middletown NY has been invaded by the northeast’s greatest stock car drivers for the Annual Eastern States Weekend, landing this year on October 19-21, 2018 and presented by Halmar International, Arkel Motors, and WLR Construction.  The 99 year old Orange County Fair Speedway plays host to this yearly event, the oldest consecutively-run championship event for dirt track Modified stock cars in the country at the oldest continuously operated dirt track in the country.

ESW (Eastern States Weekend) begins early on Friday, October 19 and features three days and evenings of non-stop racing action featuring the ground-pounding Big-Block Modifieds, Small-Block Modifieds, Sportsman and Street Stocks in qualifying time trials and heat races that set the fields for each division’s Eastern States Championship feature race.  Sportsman, which serves as a sort of rookie class will run their 50 lap main event on Friday, with the intermediate Small Block Modified class running a 100 lap main even on Saturday.  The big show, a 200 lap main event for the 850+ horsepower Big Block V8 Modified Stock Cars is scheduled for Sunday and is preceded by a 25 lap race featuring Street Stocks, a series consisting only of modified production cars that can be bought by the general public.

This years program has been enhanced in a number of ways, including additional live entertainment throughout the weekend and an increased payout structure for drivers.  Over $300,000 will be awarded to drivers, with the highest potential payout to any one driver reaching over $70,000.  This unprecedented pay out will draw professional drivers from all over the east coast from Florida to Ontario, including current Nascar Camping World Truck Series playoffs driver Stewart Friesen.

Friesen, a favorite to win in both Small Block and Big Block classes, has some serious competition in the form of Orange County Fair Speedway legend, Brett Hearn.  Hearn has taken the checkered flag in the 200 a total of 12 times throughout his career, additionally he holds the record for regular season feature wins at OCFS as well as track championships.  Often regarded as the best dirt track driver ever, Hearn has made ESW his race to lose over the years.  With a number of former ESW 200 winners still in competition, anything could happen on October 21st.

As if 3 days of high-octane racing entertainment wasn’t enough, 2018’s program introduces live music and more to the program.  Friday evening at 7PM, Southside Johnny and The Asbury Jukes are set to play a free show for race ticket holders at our historic “31st Lap Tavern” our on-site bar where race fans, drivers and car owners congregate after the action to talk racing, history and more.  Saturday night, the stage is taken over by “The Fab Faux” a pitch-perfect Beatles tribute band, starting at 7PM.  Throughout the weekend, attendees will also be entertained by activities and games like a mechanical bull, video game demonstrations, autograph sessions, kids activities, historical exhibits and cars and so much more!

Throughout the 2018 season, OCFS has rolled out many improvements to the facility’s infrastructure and seating areas including an all new aluminum, half-covered grandstand, a party deck with incredible views, an improved race track surface, an all new merchandise store and more.  ESW 2018 also sees the introduction of more new premium seating options with turn 1 climate controlled Luxury Boxes and a VIP viewing stage with an elevated top deck offering stunning views of the track.

ESW 2018 is OCFS’s biggest and best yet as they celebrate their 99th anniversary.  This is a perfect opportunity for new fans to get a taste of some of the exciting improvements being made at this historic facility and the excitement to come next year with the 100th anniversary.

Eastern States Weekend 2018 tickets can be bought online at orangecountyfairspeedway.net/tickets