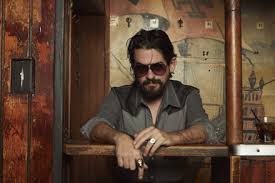 Shooter Jennings who is currently on the road in the US for his Bound Ta Git Down Tour, will be performing at Rec Room on Friday, November 9.

This August, Shooter released his critically acclaimed 8th studio album Shooter via Low Country Sound/Elektra. Recorded at the historic RCA Studio A on Nashville’s Music Row the album marks his return to his outlaw country heritage and reunited him with producer Dave Cobb (Sturgill Simpson, Jason Isbel, Chris Stapleton), who he had not worked with since his heralded 2005 debut Put The “O” Back In Country. In an eclectic discography that also encompasses southern rock, high-concept rock opera, industrial, and an experimental tribute to Giorgio Moroder, the return to a straightforward country sound is actually a bit of a left turn for Shooter.
Shooter was praised by Rolling Stone, Billboard, The Fader, Entertainment Weekly, and sparked longform podcast interviews on WTF with Marc Maron and The Joe Rogan Experience.