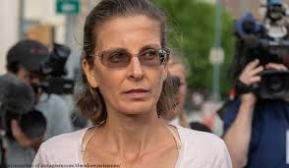 A few new filings this week — the most interesting of which concern
(a) Clare’s approved 2-day trip to Albany/Clifton Park next week – with her attorneys and for purposes of her defense.
Clifton Park is not exactly Fiji – but it’s better than being in the same old apartment every day, I assume.
(b) A letter from William F. McGovern and Sean S. Buckley – Allison Mack’s attorneys – which outlines various motions that the defendants plan to file next month.  The wording of this letter suggests that the defendants may have all entered into some sort of “Common Defense Agreement”.
There are three other important pieces of information buried in these filings:
First, we now have confirmation that the Feds are having trouble unlocking a couple of the encrypted devices that they confiscated from Nancy’s house. I would not be surprised to learn that Nancy does not have the encryption keys.
Second, we now know that the Feds grabbed up most if not all of the defendants’ email accounts.
Third, we now know that the prosecution is asking the defense to turn over materials that the defense plans to use at trial.
In the following posts, I will attempt to clarify and explain in more detail the import and potential strategies unveiled in these new filings in the case.
Meantime, a 2-day Field Trip is in store – next Tuesday and Wednesday – for Clare. Maybe she’ll run back-and-forth to get some additional miles in.
Viva Executive Success!