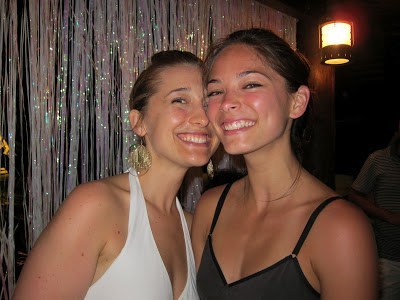 Susan Dones is a liar.  She went to the press and lied by saying Kristin Kreuk left shortly after she did in 2009.  Dones knows that is a lie.

A year after Dones left, Kreuk was on Necker Island for a secret NXIVM cult meeting. John Tighe exposed that trip, along with photographs, information about the Mexican money laundering operation, the name of one of the perpetrators, her NXIVM number, an allegation about Siobhan Hotaling being a money mule, names of the executive board, their roles etc.. He made the claim that the small band of NXIVM cultists on the island discussed money laundering, including a very specific allegation about hiding money in the Caribbean.

Why would he say that? Why lie?  He provided enough evidence and allegations in his article, why would he lie about that? If such a conversation took place on the island, why wouldn’t Kreuk know about it and taken part?https://frankreport.com/2018/08/03/blast-from-the-past-john-tighe-reports-on-the-new-nxivm-board-named-in-necker-island-2010/

“The spring of 2010 saw NXIVM in a bind. Continued negative press here and in the mainstream media had severely cut enrollment in the Capital Region. In spite of this, the increasingly paranoid and agoraphobic cult leader Keith Raniere was loath to leave the region – and was, in fact, pretty much in hiding at the time.

“Under these circumstances, Sara Bronfman called a conference of the leading figures of NXIVM to plot the future of the cult. After pleasantries, cocktails, and sex, attendees got down to the business at hand. NXIVM’s Executive Board was created with key positions given out to trusted personnel. Mexico was becoming more and more important in the strategic plans of NXIVM and membership on the reconstituted board reflected this. Well, once the board was hashed out and hurt feelings stroked, about who was in and who was out, the attendees began to plot the massive logistics of moving massive amounts of money around the globe to avoid taxation.

“On the Canadian side of the operation, Siobahn Hotaling, NXIVM head trainer from Albany, is an alleged Canadian bag lady who was making weekly trips to Canada, she then tells border guards that she is visiting friends in Canada while it is alleged that her true mission is teaching NXIVM classes {which is illegal under Canadian Law, as she is registered as a tourist with no work permit] and then transporting the tuition fees collected for the NXIVM courses taught in Canada and to pick up payments in cash from the Vancouver operation.

“Obviously, both these operation are amateurish and fraught with peril. Attendees brainstormed about moving funds to various Caribbean locations. I am afraid that many of these conversations were held away from prying ears.

“Participants, having set up their new power structure and with new money laundering ideas being batted around, went back home to preach to the masses, the very rich masses or young masses that is.”

The same month John Tighe posted that – February 2012 –  Joe O’Hara started his lawsuit against NXIVM and Kristin Kreuk was named:

All the people discussed on the Necker Island article, all of them were named. Joe O’Hara has stated a few times on Frank Report that he had reason to name all of these individuals and didn’t want to just throw anyone under the bus.

These two things alone warrant investigation. Frank talking about Kreuk and calling her out is the right thing to do. These are allegations and they don’t look good for Kreuk. Why did Kristin stay with Keith Raniere when she was named in the same Times Union expose that revealed he was a pedophile?

Kristin — you didn’t believe the victims, but you still like to virtue signal about women’s rights.

Why were you named in O’Hara’s lawsuit?

What were you doing on Necker Island?  What things did you discuss? Are you going to accuse John Tighe of lying?

What were you doing with NXIVM beyond 2013 when you claimed you had left?

Why did you never turn on NXIVM?

All of these things, combined with Kreuk’s weak PR damage-control statement forced out of her by the press, and her downright downplaying of her involvement by not talking about what she did, and her silence, just makes her look bad.  Be it illegal and/or unethical.

How many branded sex slaves were recruited by Kreuk?

How many women recruited by Kreuk had sex with Raniere?

Were women recruited directly for this?

Denial of never experiencing any ” nefarious” or “illegal” activity, yet the O’Hara lawsuit, and claims by John Tigue, contradict that. I am more inclined to believe John Tighe. Why would he lie about that? Recently, Frank has posted something about Raniere possibly being on Viagra. John Tighe was talking about that years ago. He had sources in NXIVM. His allegations about the Necker Island trip don’t seem like lies to me.

What does Susan Dones know about what Kreuk did and what she knows about – years after she left the cult in 2009?

Susan Dones claims Kreuk left the cult shortly after she did in 2009 yet just a year later, the Necker Island trip happened and Kreuk was there. Dones was not. Kreuk presumably coached at Dones’ Tacoma branch. Kreuk knew why Susan Dones left and shut down her branch. She knew what Dones accused Raniere of doing regarding sexual perversion/fucking his female students, financial crimes etc.

Kreuk did not care. Even when Dones was taken to court and Raniere/NXIVM was trying to ruin her, Kreuk did not care. Kreuk knew about the lawsuits, it was no secret. She did not care. She stayed on for many years. By the way, according to John Tighe’s coach list, Kreuk’s coach, [name redacted] was referred by Susan Dones.

Is Dones still in contact with Kreuk? Why is she getting involved?

Dones has no idea what Kreuk did after 2009.

As for Girls By Design, despite what Dones wants you to think, it was a NXIVM project. Kreuk planned it with Nancy Salzman, got Kendra Voth involved (who she recruited into NXIVM), [name redacted], Tabatha Chapman (a Smallville super fan recruited by Allison Mack) and, as an absolute minimum, the goal of GBD was to spread NXIVM bullshit to teen girls.

Even if recruiting them directly into NXIVM/Raniere’s bed was not in the cards, it was still NXIVM. As was the College Project. That was created to lure in college kids and Kreuk knew that. Why did she not mention NXIVM?

Will Susan Dones come to the defense of this?

What about Juicy Peach? That was a Kristin Kreuk/Allison Mack project to lure in “artists”. No mention of NXIVM there either. Will Dones defend that too? All three projects were NXIVM projects created within the first couple of years of Kreuk’s involvement with NXIVM. She stayed in many years longer after that, after Dones left.

What does Dones have to say about that?

Are we to believe Mack only went off the rails in 2015 with the creation of DOS!?

Why was Mack named in O’Hara’s lawsuit?

What was she doing on Necker Island?

When did Mack discover tax evasion and money laundering schemes?

When did Mack start fucking Raniere? Before or after Dones left?

If Dones wants to defend Kreuk from her time 2006-2009, then, by default, she has to defend Mack, and Mack is a monster. Surely for Mack to be a branded sex slave/master, she had to start out at least knowing about the harem/tax evasion etc. before going full sex slaver. If she knew about these things prior to 2015, so did Kreuk.

What was Mack doing before 2015 that Kreuk wasn’t?

Kreuk was in first, recruited Mack and Kreuk was favoured over Mack by Raniere.  Also, this statement by Frank:

“In real life, Kristin Kreuk was in a cult called NXIVM. She was a famous actress and so – hoping to impress Vanguard [Keith Raniere] and Prefect [Nancy Salzman] – she would travel to their tiny hometown of Albany where she helped recruit young female students thrilled to be in the same group as she was.

“Some of these females experienced psychological torture and brainwashing [and herpes] after receiving the teachings of Keith Raniere. Rather than trying to protect the girls, Kreuk continued to support NXIVM.

“’No filter. No conscience. God made you the perfect actress,’ Vanguard might as well have told her.”

Susan Dones can only talk about her time in NXIVM, what she knows about and her experience, not those who stayed on years after she left.