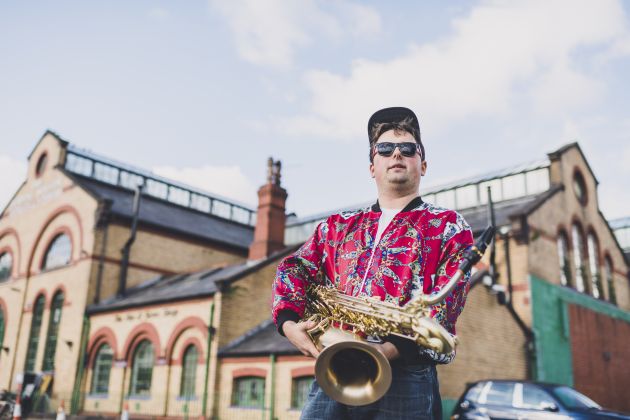 Jack ‘Mac’ McDougal is a vibrant and energetic musician, band leader, composer and multi-instrumental music teacher. He regularly plays with Jazz ensembles and live bands of various music genres across the UK. As a professional saxophonist, Jack has been influenced by such great Jazz players such as Coleman Hawkins, Sonny Rollins and John Coltrane. In addition to this, he is heavily inspired by the music and culture of New Orleans. This ranges from legendary artists such as Louis Armstrong, Sydney Bechet and Jelly Roll Morton to more recent influential musicians DrJohn, Allen Toussaint, Trombone Shorty, Kermit Ruffins and Wynton Marsalis. By appearing in local music venues and New Orleans street bands, he is forever finding ways to bring live music to life in the UK music scene.

Jack also plays live as ‘Jack Mac’s Funk Pack’, drawing influence from New Orleans and traditional Funk artists, Jack Mac’s Funk Pack is making a strong presence in South Wales and South West music scenes. Featuring a line up of talented musicians, the music is an eclectic mixture of melodic tunes, groovin rhythms and soulful harmonies, which demonstrates the full capacity of the bands abilities. The Funk Pack is continuously looking to innovate and expand it’s repertoire and sound using both new and old sources of inspiration.

The debut album, ‘Swagger Mac’, demonstrates the breadth of Jack’s personal influences and taste in music. It contains collaborative work with other artists, including the wonderful Sarah Meek and Afro Clusters’ very own Skunkadelic. In addition, this album demonstrates the talents of all the band members, including the vocals of Thom Voyce and a keyboard feature from Guy Shotton. This is the first of more planned albums from the band, get your Funk on.

Friday November 9th will see the group launch their debut 7″ vinyl single ‘Things That Make You Go Aaargh’.
They have been patiently waiting to unveil this slice of funky acid jazz to an unwitting world in dire need of a good boogie.
After Le Fleur’s launch last year, the group have gone from strength to strength, and this is the next chapter of their journey to the beyond.

Hailing from Melbourne, Australia, the group were formed by Leilani La Fleur and Bud Wilkins with the intent of bringing a particular up-tempo flavour to the world. Joined by groove masters Blake Savannah (bass), Fergus Kuhar (drums), Jess Maher (sax), Gus Cox (Trumpet) and Mia Stofonios (backing vocals) hooks and funk are abound, and the group deliver a strong shot of song writing to go down in addition to following in the footstepsof Funk/Poplegends such as Jamiroquai, Michael Jackson and Chic.

Backed by the outer space odyssey that is the B-side ‘Cosmic Relations’, Le Fleur’s brand new single ‘Things That Make You Go Aaargh’ is a must listen if you have a habit of getting down. If you don’t, Le Fleur will help you soon develop one.

AV Super Sunshine has been building a buzz and expanding fan base through club play, radio play, social media and music video programming. With the grass roots support of 250K + fans across demographic and geographic boundaries it doesn’t look like he’s going anyhwere, anytime soon.

A native of Wisconsin, AV’s life has been anything but the conventional mid west psyche. For 15 years he made no music whatsoerer. “I got really sick,” he relates. “I had a very big portion of my life that wasn’t very productive. But that’s when i started playing again and really writing from the heart. I began writing what i felt rather than trying to write songs to please”.

AV’s newly found motivation began by seizing an invitation to host Wisconsin’s oldest weekly open mic and within a few month’s time of showcasing his songs, he received an invitation to record at Ben Fold’s studio in Nashville.
While recording at Ben’s, he received his unique name from Grammy nominated producer James House who crafted it by combining the artist’s initials of AV with his song title ‘Super Sunshine Girl’ to form AV Super Sunshine.

Timebomb is his new single, think LCD Soundsystem having a picnic with Marc Bolan at a ‘Rocky Horror Picture Show ‘ party and you’re half way there.

T.I. & YOUNG THUG TEAM FOR “THE WEEKEND” VIDEO
‘COME ON DOWN!’ THE PRICE IS RIGHT LIVE RETURNS TO SENECA NIAGARA RESORT & CASINO JANUARY 25TH AND 26TH