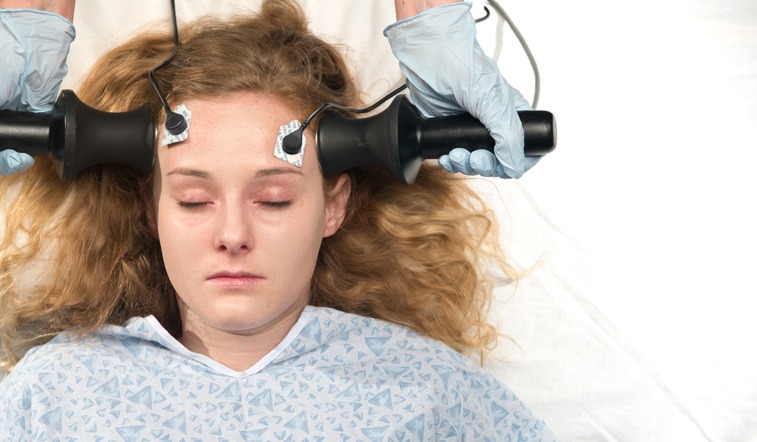 APA’s newest cash cow: ECT the panacea for ALL citizens including children

First it was the ‘chemical imbalance’ theory which propounded a person was mentally defective because of an imbalance of brain chemicals is in dire need of taking more chemicals (drugs) to ‘level’ him out.  Never was a person told what the proper chemical levels should be, nor did they ever do a proper medical test to see which of these so called chemicals were out of balance.

People have been lied to, yet the incompetent, but authoritative ‘experts’ in the field are boldly proclaiming that the newest way to treat someone is with ‘deep brain stimulation’ also known as Electro Convulsive Therapy or ECT that one can do in the comfort of one’s own home or in a spa setting or at the doctor’s office.

These ‘new’ devices can be worn on the head like headbands or helmets can be implanted so the person delivering the shock can do it from a distance or over the internet.  The treatment is being couched in kinder, gentler terms, and the unsuspecting public is supposed to believe that ECT is no longer harmful and submit willingly AND pay for it.

In 2006, at the Annual Comprehensive Review of Psychiatry Convention in Niagara Falls, NY, Dr. Charles Nemeroff bragged about the newest money making invention- a device that got implanted in the neck whereby the psychiatrist could shock the patient whenever he wanted over the internet. He casually warned while laughing, not to implant it near the vagus nerve because it could kill the patient and then you couldn’t bill him.  He bragged that he ‘could be at a party having a martini while making a ton of money electroshocking his patients and he could watch over the internet. He could bill the patient every time he shocked him and he could do it whenever he wanted.  The only caveat at that time, he warned was that billing was a problem because if your patient happened to be across a state line at the time of the shock and you were not licensed in that state then that could be a problem, but they were ‘working on that’.

I suspect they have solved that ‘problem’.

They KNOW and have always known that the drugs don’t work.  They have never worked. They also KNOW that their new panacea of the ‘Deep Brain Stimulation” devices aka ECT doesn’t work either.  However, with a few cents of electricity, they can cash in.

In their new marketing campaign, they say that the drugs are not effective enough so they have to do something else. They advertising their failure to gain support and get government money.

The previous therapy wasn’t effective, so now they are selling us on a new one which is equally as barbaric, equally as destructive and equally as ineffective.

They are using the very same strategy on the public as they did with the drugs: LIE to us, tell us it is safe and normalize the treatment by stating it over and over again until the public just thinks it’s normal. They are NORMALIZING ELECTROSHOCK therapy that one can do in the comfort of one’s own home under the new gentler name of DEEP BRAIN STIMULATION.

Special needs children in Canton, Ma. have been guinea pigs for this heinous practice since the early 80’s at the Judge Rotenburg Center founded by Matt Israel who has been using a skin shock machine on his victims.  After a severely autistic boy was shocked 5000 times in one day to no avail, Israel decided that the machine wasn’t strong enough, so he devised a newer stronger model which he dubbed the ‘Graduated Electronic Decelerator IV – because it has four settings, number 4 being the strongest.

Over 60 kids have died while in his care. JRC is the only facility in the US using this particular device even though it has been condemned by disability rights organizations, the ACLU, and the UN Special Rapporteur on torture.

The Massachusetts governor’s office sued to stop the practice in 2013. But Judge Katherine Fields of the Bristol County Probate and Family Court, ruled at the end of August 2018, the state failed to demonstrate that the procedure “does not conform to the accepted standard of care for treating individuals with intellectual and developmental disabilities”. Wow. What is the accepted standard then?

Judge Ernest Rotenberg was the first judge to grant license to this barbaric practice on children. Israel could hardly contain his elation over the fact that he could now continue his punishment techniques with reckless abandon that he named his center after the judge while proudly proclaiming he espouses punishment for bad behavior rather than rewarding good behavior.  One of the myriad problems with this is that almost every behavior that these poor children do is classified as ‘bad’ behavior.

Torture at the consent of a judge sets a very dangerous precedent.  Of late, the FDA has colluded with the American Psychiatric Association to declassify the ECT machine from level III (highest risk) category to level II- the same level as powered wheelchairs and some pregnancy test kits even though there is no clinical evidence to support the safety or efficacy of the device.

The APA is asking the US FDA to allow them broader use of electroshock ‘treatment’ on all citizens, including its use on children , stating to the FDA that ‘Having access to a rapid and effective treatment such as ECT is especially meaningful in children and adolescents.”

Manufacturers of ECT machines have never been required to provide a Premarket Approval application (PMA) with clinical trials to prove the device is safe.   In 1990 and 2009, the Federal government required the FDA to either reclassify Class III medical devices or ensure manufacturers submitted PMAs if they remained in the high risk classification.   ECT device manufacturers have failed to submit any PMAs. So, what did they do?  They simply reclassified them to say that they are about as dangerous as a home pregnancy test.

Most medical devices are classified as Level II but most devices don’t send copious amounts of electricity through the brain. This makes it possible for any device resembling an ECT machine to be fast-tracked through the FDA without proving safety or efficacy, and opens the door to a whole new cash cow – the Deep Brain Stimulator. These are being marketed on Social Media as treatment for Parkinsons, brain injury, addiction, stress and depression

An informal survey on Facebook with one question ‘Would any of you willingly undergo Electric Shock Therapy’ returned an incredible 100 percent answering, ‘NO.’

Slick advertising and repeating the words enough times so that unsuspecting people will begin to think that ‘Deep Brain Stimulation’ is ‘normal’, many people will do exactly that – submit willingly (albeit unwittingly) to Electric Shock Therapy.

Don’t be fooled.  Deep Brain Stimulation and GED is nothing more that Electroshock.  Who in their right mind would consent to having up to 460 volts of electricity shot through their head, much less doing it in the comfort of one’s own home?  But, since you don’t use as many volts at home as traditional ECT, it is touted as being much safer!

JRC is a non-profit organization and as of 2015 has been receiving $30 million per year of taxpayer money from New York City, in spite of its record of abuse and violations of New York state rules, including restraint, seclusion, hunger, and electric shocks. The school has been sued several times by parents of former students alleging abuse, has been investigated by the US FDA and yet continues it barbarous practice violating the 8th amendment of cruel and unusual punishment.

Most of the students at the center are from NYC.  In 2015, of the 137 students there, 121 of them were from NYC, due to a policy instituted by Mayor Bill De Blasio where the city declines to fight cases involving special needs children in which it is “unlikely to prevail.” Once students are enrolled at the school, it is almost impossible for the city to get them out if the parent disagrees, even if they are paying the bill.

In 2006, Massachusetts Division of Licensure found that 14 of the school’s 17 psychologists, including then director of psychology Robert von Heyn, lacked proper licenses. The state reimburses JRC for the services rendered by its doctors, and because licensed psychologists can command a higher rate, this means that JRC was potentially overcharging the state.  In 2007, The Massachusetts Inspector General’s Office found that JRC may have overbilled the state by nearly $800,000.

The school employed Bracewell & Guiliani, former Mayor Rudolph Guiliani’s firm, and the Albany firm of Malkin & Ross, and has spent approximately $770,000 since 2010 lobbying officials in Washington DC, Massachusetts, and New York to reduce the restrictions on their practices.

The Judge Rotenburg center justifies its actions based on research papers and because the kids at the center perform Self Injurious Behavior or SIB such as hair pulling and head banging.

However,  Noha F Minshawi, PhD, assistant professor of clinical psychology in clinical psychiatry at Riley Hospital for Children, lays out the 4 reasons why a child would demonstrate self injurious behavior:

According to Stephen M. Edelson, PhD, “Beta-endorphins are endogenous opiate-like substances in the brain, and self-injury may increase the production and/or the release of endorphins. As a result, the individual experiences an anesthesia-like effect and, ostensibly, he/she does not feel any pain while engaging in the behavior (Sandman et al., 1983). Furthermore, the release of endorphins may provide the individual with a euphoric-like feeling.”

A research paper supplied by the Judge Rotenburg Center entitled, “CLINICAL EVALUATION OF THE SELF-INJURIOUS BEHAVIOR INHIBITING SYSTEM (SIBIS) by Thomas R. Linscheid,  “…considered by many to be one of the most intrusive behavioral interventions, response-contingent electrical stimulation is potentially superior to and safer than a number of currently used punishment techniques in several respects. …such can be delivered quickly and sometimes remotely, reducing the likelihood that the punishing event will be delayed”.

The study continues, “One year after Marie’s admission to the institution, no request to reinstate treatment with SIBIS has been received, despite the failure of two newly developed nonintrusive programs and the fact that Marie is required to wear a helmet almost continuously to prevent damage from head banging.”

So, in other words, it DIDN’T WORK.

Matt Israel stepped down in disgrace in 2011 and has narrowly escaped going to prison.  He had to serve 5 years probation.  JRC currently generates revenues of over $52 million a year, with residential placements costing over $200,000. Most of this cost is covered by state and local school districts and state agencies serving disabled adults, with adults and children living at the JRC coming from New York, Massachusetts, and seven other states.

The JRC is still open and little has changed.  It still employs unlicensed psychologists, it still shocks the kids, the taxpayers still pay for it, and the kids are still scared to death.

Watch a video of a student tell of her experience at JRC: https://www.youtube.com/watch?v=6B_ej5zyWp0