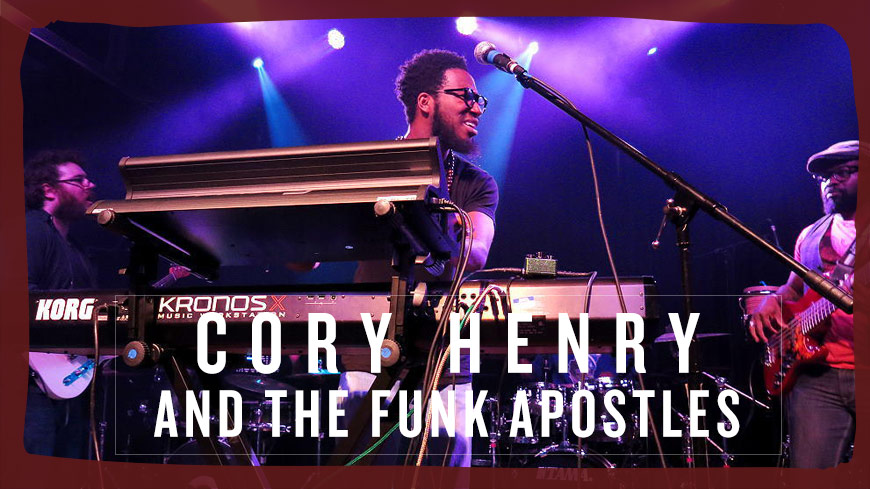 Live in Asbury Hall at Babeville

“The human voice is so powerful,” says Cory Henry. “When I’m singing, it’s like this extra way of connecting and communicating with people beyond what I can do just playing the organ. I’m able to convey these messages that are really important and meaningful to me through my words. Being front and center like this every night, it’s a challenge, but I’m up for it.”

On the debut album with The Funk Apostles, ‘Art of Love,’ organ virtuoso Cory Henry demonstrates that’s he more up for the challenge, moving from sideman to frontman with seemingly effortless grace and cool. Praised by AllMusic as “one of the finest Hammond B-3 organ players of his generation,” Henry also proves himself to be a remarkable singer and songwriter here, one of extraordinary depth and vision. He and the band whip up an intoxicating blend of blues, soul, R&B, Afrobeat, gospel, and jazz on the record, blurring genres and upending expectations at every turn. Simultaneously futuristic and retro, experimental and classic, it’s the sound of one of modern music’s most inventive minds coming fully into his own as a bandleader and storyteller.

A Brooklyn native, Henry may be best known for his role in Snarky Puppy, the instrumental jazz-pop orchestra hailed by Rolling Stone as “one of the more versatile groups on the planet right now.” He’s won a pair of GRAMMY Awards for his work with the band since 2012, but Henry’s deft keyboard skills have been blowing minds around the world for more than two decades now. At six, he made his debut at Harlem’s legendary Apollo Theater, and at nineteen, he joined the touring band of jazz icon Kenny Garrett. Since then, he’s toured or recorded with everyone from Bruce Springsteen and The Roots to P. Diddy and Yolanda Adams in addition to cracking the Top 10 on Billboard’s Jazz charts with a pair of solo albums. NPR called him “a master” and said his “musical charisma is a match for a nearly 400 pound organ,” while Keyboard Magazine dubbed his playing “soulful, church-y, playful, restrained, and virtuosic,” and The Boston Globe raved that “if anyone’s going to preach the gospel of the Hammond organ, it should be Cory Henry.”

Henry pieced together The Funk Apostles’ lineup out of players he met on the road over the years, and each member of the band is an all-star in their own right. Guitarist Adam Agati, who co-wrote the album’s lyrics with Henry, has worked with everyone from Booker T. Jones to Ludacris, while bassist Sharay Reed has performed with Patti LaBelle, Aretha Franklin, Chakha Khan, and more. Henry met drummer TaRon Lockett while he was playing with Snarky Puppy, but he’s performed with some of the biggest names in R&B including Erykah Badu and Montell Jordan, and keyboardist Nick Semrad’s credits include Miss Lauryn Hill, Bilal, and Gabriel Garzon-Montano.