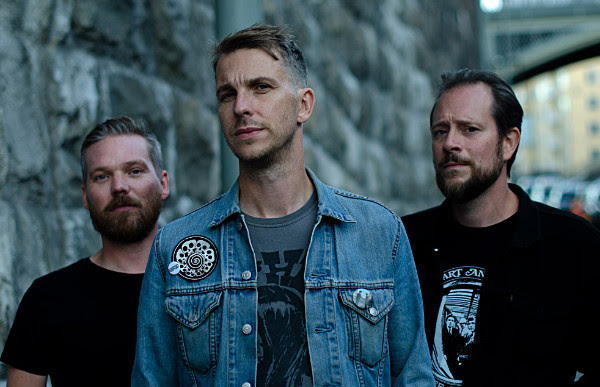 “Flood shows a particular focus on songcraft, one that uses proggy stoner riffs to keep a hypnotic cadence while the vocals guide you on a melodic journey — none of this would work well if the riffs in question weren’t whoppers, which in Domkraft‘s case, they most definitely are.” – Revolver

“All the classic elements are classic for a reason and this album showcases this; the concotion just works. It does so not by magic but because Domkraft know how to mix it, prepare it, and serve it.” – Heavy Blog is Heavy

“Domkraft is the best Doom/Sludge out there today.” – Rock and Roll Fables

“Flood is a melting pot of modern heavy. Yes, that heft is there, but even more so throughout the seven-song/41-minute outing is a sense of drift and space rock thrust, a heavy rocking swing and bounce, an element of noise rock and post-metal in some of the shouted vocals and plenty of psychedelia throughout.” – The Obelisk

DOMKRAFT, whose name combines the Swedish “DOM” for judgement and “KRAFT” for power, is a strong contender to dominate a style many are calling the New Wave of Swedish Doom Metal.

The band’s new album FLOOD is a devastating achievement, merging blackwater tributaries from Neurois, YOB, Cough and Sleep into an all-encompassing torrent of nothingness and resignation, but in the grooviest, most engrossing possible way.

Wielding a mindbending soundscape of obeliskian riff-majesty, DOMKRAFT discharge layer upon layer of crushing fury, weaving through the wormhole punctures of spacetime in cyclical defiance of beginnings and endings.

If debut album THE END OF ELECTRICITY (Magnetic Eye Records, 2016) was the soundtrack to the impending apocalypse, then follow-up FLOOD provides the musical backdrop to Armageddon in full, The Purge-style swing.

DOMKRAFT FLOOD is currently streaming in full via Revolver at this location and on the label’s YouTube here.