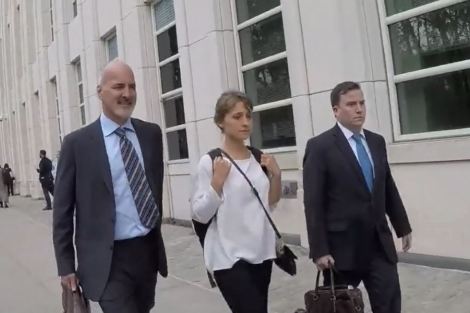 Allison Mack was and is an adult. Adults must take responsibility for their actions.

No, Mack participated in it.

Was Ms. Mack unaware of the rumors of pedophilia?

No, Ms. Mack not only knew about the pedophilia but there are reports that she enabled it.

Was Ms. Mack unaware of the sexual slavery?

No, there are even reports that Mack and Clare Bronfman fought over who would be the slave master of India Oxenberg.

Did Mack at any point object to the branding of women?

No, Ms. Mack spurred Dr. Danielle Roberts on to brand the women even as the women were screaming in agony.

Did Ms. Mack profit from the many crimes of NXIVM?

She sure did at one point, owning a house in Clifton Park that supposedly came from the proceeds of money laundering as well as owning a townhouse. And Mack owned a BMW which might have been a gift or payment from Clare Bronfman.  On top of that, Mack’s activities at NXIVM afforded her a lifestyle of global jet-setting.

Was Mack offended by the violent experiments performed on women by Dr. Brandon Porter?

No, she used Dr. Porter to recruit students into her acting school. And Mack sold Dr. Porter a house.

Did Mack ever hesitate to try to recruit women into the cult?

No. Mack tried to recruit actress Emma Watson and singer Kelly Clarkson into the cult as well as an Albany wine bar hostess knowing full well that she was working to expand a sex slave cult.

Allison Mack’s hypocrisy knows no bounds. She advocated women’s empowerment while torturing and enslaving women. Her social media is filled with virtue signaling, quoting Martin Luther King, Gandhi and Harriet Tubman while in her own personal life committing all kinds of human rights atrocities.

Maybe Frank feels remorse and regret for what happened to Ms. Mack. But Allison is the author of her own misfortunes.
If Raniere had not been stopped, Allison Mack would, in all probability, still be branding and enslaving women.

I leave you with words from the poem, “Invictus”, by William Ernest Henley.

“It matters not how strait the gate,
How charged with punishments the scroll,
I am the master of my fate,
I am the captain of my soul.”

Allison Mack is the master of her fate and the captain of her soul.  She has no one to blame but herself.