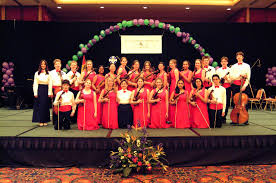 Buffalo Suzuki Strings will kick-off its 50th Anniversary Celebration this Saturday, October 20, 2018 at 4 Webster Street in North Tonawanda, Buffalo Suzuki Strings’ home.  There will be a variety of special events planned for the families of BSS between 9:00 am and 2:00 pm that day, but the highlight will be special guest, world-renowned concert violinist and teacher, Brian Lewis.  Mr. Lewis will perform a short recital beginning at 10:00 am.

Founded by Mrs. Mary Cay Neal in 1969, Buffalo Suzuki Strings has been an inspiration and exceptional music education institution for hundreds of WNY families over the past 50 years.  Mrs. Neal studied directly with Dr. Shinichi Suzuki and is a pioneer in bringing the Suzuki Method to the United States in the 1960s.  Dr. Suzuki believed that all children have the ability to learn a musical instrument the same way they learn their native tongue, if taught in a nurturing environment with parental involvement and support.

The 50th Anniversary year for Buffalo Suzuki Strings will have a variety of special activities and events planned including BSS alumni that will return to give a professional concert in June of 2019.  “We want this to be a year of celebration for our current families, BSS alumni, and the Western New York community,” states Mary Cay Neal Founder of BSS.  “Having Brian Lewis with us, such an influential person of the Suzuki Method that is committed to carrying Dr. Suzuki’s legacy for future generations, is the perfect way for us to kick-off our 50th anniversary year.”

Throughout its 50-year history, the music program has produced students who play at the highest levels.  Buffalo Suzuki Strings’ students have performed with all of the orchestras in Western New York, including the Buffalo Philharmonic Orchestra.  Its Friendship Touring Ensemble has performed in 24 countries around the world – putting Buffalo, NY and Buffalo Suzuki Strings on the world map for Suzuki musical excellence.