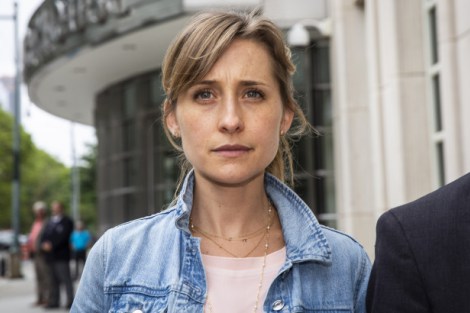 UPDATE: I have now communicated with this source and she

has demonstrated she is the person she claims she is…

I received an email recently that, at the minimum, is peculiar. I cannot give readers all the details for the protection of what may be an authentic source, one who is possibly in trouble.  The email may have also come from a person who is a troll or has some other sinister motive or hidden agenda.

The email address, however, came from a person who is searchable online and is female. The individual provided in her email certain other proofs of her identity and a way to find out if she is telling the truth about her identity.  She provided me with a selfie picture, which I cannot publish for obvious reasons.  In the email, the person claims to be a slave – connected to NXIVM and seems to have been originally recruited through Girls By Design – with the help of Kristin Kreuk, who she refers to as KK, and Allison Mack.

I have redacted, in numerous places, out of an abundance of caution, some of the content of her email so as to not reveal who the person is – especially since she says she is concerned that Kristin Kreuk and others might learn her identity if I revealed too much. She gave me permission, however, to quote from her email, but not in its entirety.

The email reads [minus redaction]:

PLEASE DO NOT RESPOND TO THIS EMAIL ADDRESS. I DO NOT HAVE PERMISSION TO SPEAK TO YOU. After I send this email I will delete it from my sent folder. If you respond [redacted – but briefly outlines what will happen].

Please don’t throw me under the bus. My hands are shaking while I type this. I am speaking up for several [redacted – gives name for others] stuck in this shitness of a situation. I am not a troll. [sentence redacted] Please do not quote my entire communication or they will know who I am.

In [redacted], women who are submissive (sub/slave) are very strong in trusting and giving power over to a master (female or male, so misogyny is moot). It takes a huge amount of self control to allow another human command over your every word and action. As a sub, I feel powerful. As a sub under an abusive master, I feel confused and angry and betrayed.

I was [redacted] Girls By Design. I have [redacted] with Allison Mack, Kristin Kruek, Tabitha Chapman, Kendra Voth, master Keith [redacted] and others [redacted].

[Redacted] master Keith does not have the best interest of his slaves in mind regarding his actions. He is selfish and immature and sexually volatile. He betrayed Mistress Ally on multiple occasions.

[Allison] is trying to find her own strength. [Redacted] She was a good girl. She did as master Keith told her to do, and I am literally sick that this has [redacted].

Kristin Kreuk goes by her middle name on Facebook. I had previously [redacted] [Redacted – refers to Kristin Kreuk and another woman]. I think their behavior is disgusting.

Girls By Design was absolutely a NXIVM recruitment program. It was actually started by KK and Mistress Ally.

Three weeks after the website started, and the numbers were slow, master Keith moved Mistress Ally to another program called “Gone in Saigon”. It was a questionnaire about past lives. When Mistress Ally left, Kendra Voth replaced her. The YouTube channel for GirlsByDesign is still active. Kendra was a weak charlie sub. At best, she was a personal assistant to those who actually mattered in NXIVM.

Mistress Ally was not wrong in being a good girl. She did what master Keith told her to do.  KK betrayed us and master Keith abused his power.

Let’s look at a few points made in the email: Latin for “my belonging” is, according to the online translator –  “mea sunt”.

This very specific information may be susceptible to proof.  Does Allison have a tattoo or brand on the inside of her left thigh with Latin words or symbol?

Has anybody ever heard of Gone in Saigon? or that Allison was associated with a program that seems to involve the topic of reincarnation.

I plan to investigate further and hope my readers will provide any information they possess, as well as any intelligent insight, speculation or conjecture.

For those who do not want to give information publicly, please feel free to contact me privately – at 716-990-5740, or email me at frankparlato@gmail.com. All contact will be strictly confidential.

Finally: What is claimed in this email is disturbing and involves Allison Mack – who has been charged with sex trafficking. It also names others who have not been charged – including a public figure, actress Kristin Kreuk.

If this is not true, then it is important to clear her. On the other hand, if some or all of this is true, it may help explain why Kreuk has been reticent to say much about her role in NXIVM.

Click here to post a comment
‘Slave’ tells about her role in GBD, about Allison & Kristin Kreuk: “I never saw KK do anything illegal’
Guest View: Twenty Questions on NXIVM & the importance of obtaining Nancy Salman’s cooperation