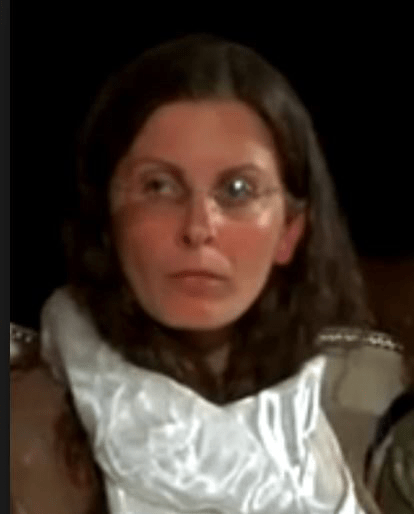 In her October 11th letter to Judge Nicholas G. Garaufis, Kathleen E. Cassidy, one of Clare Bronfman’s attorneys, requested that Clare be allowed to travel to Clifton Park, NY on October 16th-17th “…for purposes of conducting defense investigation in preparation for trial in the above-captioned case”.

Clare needed permission from Judge Garaufis to make the trip because she is confined to her luxury apartment in Manhattan, as she awaits trial on a variety of criminal charges. She is only allowed out five hours per week to do errands, exercise, shop, etc..

Based on Ms. Cassidy’s representation as to the purpose of the trip, Judge Garaufis approved Clare’s travel request the very next day.

Perhaps the next time Clare makes such a request, Judge Garaufis will require her to appear before him – and testify under oath exactly why she needs to go anywhere to meet with anyone.  The reason he might do that is that Clare may have lied [or lied by omission] about why she really wanted to go to Clifton Park earlier this week – or what she planned to do while she was there.

Like all high-ranking members of NXIVM, Clare has been taught that lying – even to a Federal judge – is ethical as long as doing so is for the greater good of the mission. Clare is well practiced at lying. Court records and police blotters all over the U.S. and Canada are littered with examples.

Clare has also perfected the art of testifying, under oath, the exact opposite of what she previously testified to, also under oath.

And, she may have lied to Judge Garaufis.

Why do I make that claim?

Because Clarebear was arrogant enough – or dumb enough – or both – to document, in her own handwriting, that she went to Clifton Park to work on something other than her criminal case. She went there – at least in part – to further orchestrate a lawsuit against me.

According to the old saying, “The proof is in the pudding”. But it’s also in the notarized affidavit that Clare signed in Saratoga County on October 17th. Here’s the front page of her affidavit.

Below is the signature page bearing Clare Bronfman’s signature. 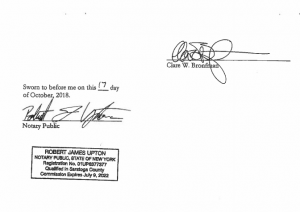 Note that Clare signed and notarized her affidavit – part of her well-funded effort to sue me and shut down the Frank Report – while she was on her overnight trip to Saratoga County — a trip that her attorney told the judge was to “…conduct defense investigation in preparation for trial.”

Should Clare have told Judge Garaufis that she wanted to go to Clifton Park – at least in part – to orchestrate her lawsuit against me? Of course, she should have. So, why didn’t she do that?

Maybe she chose to withhold the information because she’s angry at Judge Garaufis, who had the audacity to order her – her, Legatus – Vice President of Operations of NXIVM, an heiress of the Seagram’s Liquor fortune – a woman who could buy and sell the judge ten times over – to post $50 million in assets to secure an astonishing $100 million bond, and then ordered her confined in her apartment 97% of the time until she goes to trial, while wearing an ankle monitor 24/7.

Doesn’t he realize how hard it is to jog 30 miles per week with an ankle monitor on?

Then again, maybe she wasn’t angry with the judge.  Maybe it was strategic. Perhaps she didn’t want to tell him about the lawsuit, for it might be deduced that this is part of her strategy to try to shut down the Frank Report – possibly because it has exposed so much about the illegal activities perpetrated by her and her Vanguard.

Maybe she was just worried the judge would not have approved a 2-day overnight trip if he knew she was planning to go there to continue her never-ending battle to punish NXIVM enemies.

In any event, this past week, Clare came to Clifton Park and right off the bat, she began orchestrating her lawsuit against me.

I doubt her attorney, Kathleen E. Cassidy, was aware of what may have been one of Clare’s chief reasons for wanting to go to Clifton Park when she submitted her letter to Judge Garaufis.  Whether Clare chose to hide it from the judge deliberately, or whether she did not think it needed to be disclosed, it’s ironic that this is just what the Government said she would do – if she was not confined to home detention.

Go out and sue people.

In arguing against her release, the government alleged that Clare Bronfman “…has led efforts to discredit DOS victims and has orchestrated abusive litigation meant to intimidate and attack perceived enemies and critics of Raniere.”

In arguing against the Government’s position, her attorneys wrote, “The government’s only allegations with respect to Ms. Bronfman that they claim suggest a risk of witness intimidation are (1) that she aggressively pursued litigation against NXIVM adversaries”, and (2) that she “…compile[d] information and threaten[ed] litigation against those she considered to be an enemy or critic of Raniere”…”These allegations fail as a basis to restrict Ms. Bronfman to house arrest. First, they are not recent and do not raise any concern that Ms. Bronfman would attempt to obstruct justice while she is under Indictment.”

To be clear, I have not been notified that I may be witness – either for the prosecution or as a hostile witness for the defense – although there is certainly a chance I may be called. Still, it is funny — the very first time Clare gets a two-days-of-freedom pass – one of the first she things does is work on her lawsuit against me.

Perhaps Clare may regret her decision not to inform Judge Garaufis about one of the reasons for this week’s trip.  He is, after all, the man who will be presiding over her criminal trial – and who will be deciding how long she spends in federal prison if she is convicted. If the judge wanted to, he could also revoke Clare’s bail – and have her incarcerated at the Metropolitan Detention Center until she goes trial. She will find it far less pleasant there and much harder to sue enemies from her cell.

The ironic thing about this whole matter is that Clare could have secretly met with lawyers representing her in the civil case against me while she was in Clifton Park, discussed what they else they might be able to do to shut down the Frank Report, and then taken the affidavit back with her to Manhattan. She could have then signed the document, had it notarized there, and sent it back to her attorneys via overnight mail – and no one would have been the wiser.

Instead, she seems to have chosen to flaunt what she was really doing in Clifton Park.  Maybe it was meant as a message to other NXIVM enemies.

On the other hand, it might be just an addiction. She not only loves to lie, she loves to sue – and when she can do both, she is probably in heaven.  Perhaps it’s just an irresistible impulse. 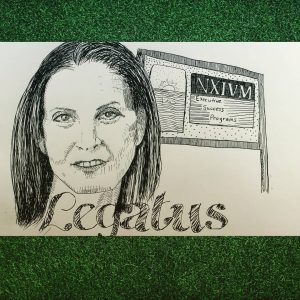 More on Gillibrand dodging debate with her opponent – and the NXIVM nexus
Farley Calls ‘Fowl’ as Gillibrand Chickens Out of Debate; will avoid NXIVM questions
Comment