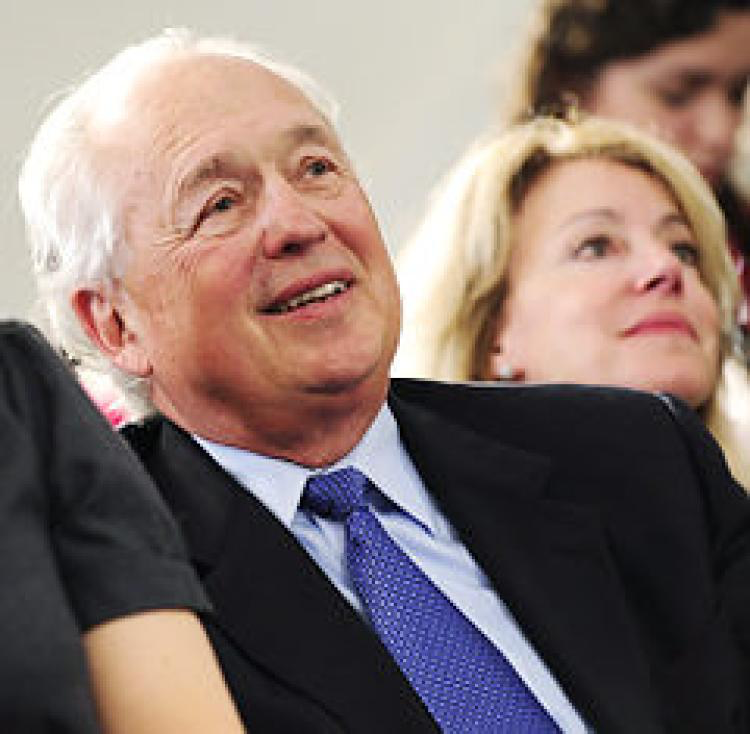 Maybe she doesn’t have something to hide.

But Kirsten Gillibrand, the US Senator from New York, canceled Sunday night’s debate against her opponent, Chele Farley. The debate was to be held at Skidmore College and broadcast on Spectrum NY1. Gillibrand canceled after 6 pm on Friday, 48 hours before the only planned debate between the candidates.  She released a statement claiming the reason she would not debate was there was an ongoing labor dispute at Spectrum that would require her to cross a “de facto picket line.”

Gillibrand previously rejected a debate offer from News12 Long Island set for October 18, 2018, then rescheduled for November 1, 2018. She was campaigning in New Hampshire on October 18, 2018.

A Siena College poll in June showed that 61 percent of likely voters in the state would cast a ballot for Gillibrand versus 28 percent for Farley.

Asked if she was planning to run for president in 2020, Gillibrand said earlier this year, “I want to be a New York State senator. …  And I’m 100 percent focused on serving New Yorkers….  I ruled out anything that’s not focused on ’18. So I’m just literally focused on getting reelected and being able to keep serving in the U.S. Senate.”

During this election season, Gillibrand has spent only one day in New York in October, while making five stops on the Presidential campaign trail in Georgia, Michigan, Pennsylvania and Tennessee before capping of a visit to the home of the first Presidential Primary, New Hampshire.

Over the years, Gillibrand has shifted positions, a topic which might have come up in the debate.

When she was running for the U.S. House of Representatives in rural upstate New York, Gillibrand was a staunch supporter of gun rights, earning an “A” rating from the National Rifle Association.

When she ran for Senate in liberal New York State, she changed positions to one decidedly anti- Second Amendment. Her grade from the NRA dropped from an “A” to an “F.”

As a congresswoman from 2007 to 2009, in her rural conservative district, Gillibrand opposed amnesty for immigrants living in the country illegally and opposed former Gov. Eliot Spitzer’s plan to distribute driver’s licenses to such residents.

As a congresswoman, who represented a Republican district, she supported the Secure America through Verification and Enforcement, or SAVE Act, which called for beefing up U.S. Border Patrol resources.

As senator for liberal New York,  she hired “a public-affairs consulting company with ties to the Hispanic community” and pledged her support for the DREAM Act.

She became the first senator to call for abolishment of U.S. Immigration and Customs Enforcement, or ICE, calling the agency a “deportation force.”

She had the lowest rating of all of New York’s Democratic representatives from the LGBT advocacy group the Human Rights Campaign.

In 2017, Gillibrand introduced Legislation To End Discrimination Against Potential LGBT Adoptive and Foster Parents Based on Their Sexual Orientation.  In 2018, HRC invited Gillibrand to speak at their 2018 HRC Greater New York Gala and endorsed her for reelection. 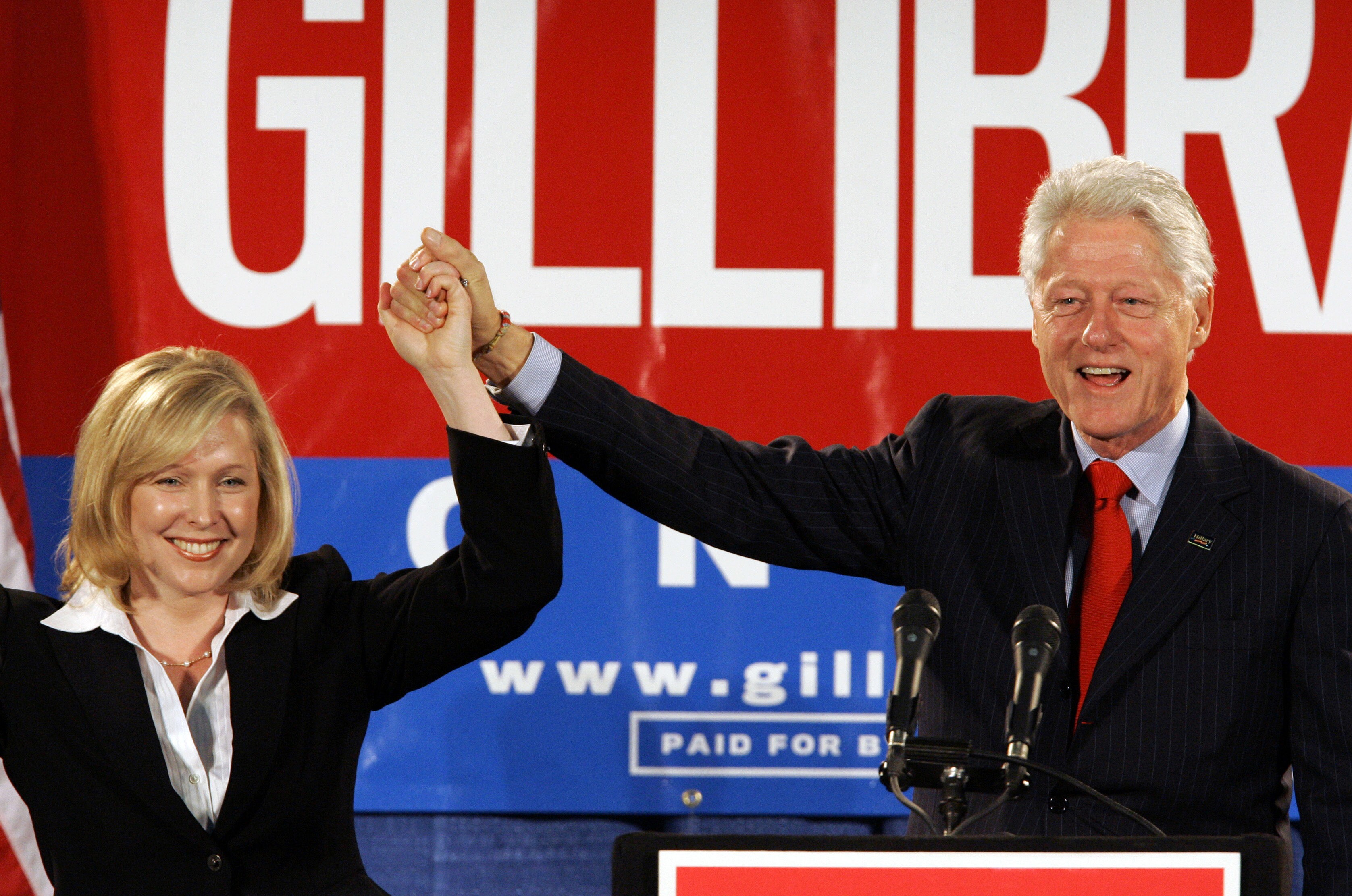 For more than 20 years, Gillibrand took the Clintons’ endorsements, money, and was appointed with Bill and Hillary’s help to her seat in the US.  Hillary was a mentor to Gillibrand and wrote the foreword in Gillibrand’s 2014 memoir, “Off the Sidelines.” Bill Clinton campaigned for Gillibrand in her successful 2006 bid for Congress.

Gillibrand told The New York Times last November that she believed it would have been “the appropriate response” for Clinton to resign the presidency after his affair with Monica Lewinsky came to light.

When she was new to the Senate, contributions she received from the political action committees of the Financial Services Roundtable, the National Venture Capital Association, Oppenheimer Funds, Citibank, and C.V. Starr, a financial firm run by former AIG chairman Maurice Greenberg were the largest of any Senator.

Trump described Gillibrand as “someone who would come to my office ‘begging’ for campaign contributions not so long ago (and would do anything for them).”

In June, Gillibrand shared a stage with Sanders and Warren at a summit in Washington, D.C., where organizers said they sought to collectively pull the Democratic Party to the left.

Gillibrand now supports a financial transaction tax, or levy on the sale of stocks, bonds and other investments.

The National Taxpayers Union gave her a grade of F in 2016, and her score of 19 out of 100 was two points lower than Chuck Schumer. Citizens Against Government Waste rated her “hostile,” awarding her only 6 points out of 100.

Before she got into politics, Gillibrand was a lawyer at Manhattan’s Davis Polk, where she defended one of the leading cancer producing companies in the world, Philip Morris – as it defended itself against allegations by the Justice Department that it had lied on the stand about the perils of smoking.  Gillibrand spent significant time interviewing top laboratory scientists in Germany to try to prove that the dangers of smoking were exaggerated and Philip Morris didn’t lie.

She then worked with Phillip Morris developing key strategy [how to lie] during the Justice Department investigation into whether industry executives had perjured themselves before Congress by swearing they didn’t believe smoking was addictive or there was a link between cigarettes and cancer.

Gillibrand helped craft a momentous victory for the tobacco industry – getting them out of a jam and allowing them essentially to stay in business.

After she changed firms, she represented Philip Morris’s parent company, the Altria Group, assisting them with securities and antitrust issues in order that they might be able to continue to fund the necessary promotional campaign to hook teenagers around the world into the lifetime habit of smoking.

After becoming a politician, Gillibrand downplayed her role as a lawyer for the tobacco industry saying she was a junior associate at the time and didn’t have much involvement or role in the tobacco’s defense.  Yet she was in charge of a team of lawyers defending the tobacco giants.

The New York Times scheduled an interview with Gillibrand to talk about her role with big tobacco, but, like she did with her debate, she canceled the interview at the last moment.

Gillibrand accepted nearly $20,000 in campaign donations from the tobacco industry in her congressional campaign.

After she left Davis Polk, she joined the law firm of Boies Schiller Flexner LLP, headed by famed attorney David Boies, who represented Harvey Weinstein for years.  She worked for the firm for six years prior to her election as a US congresswomen.

While she worked for the firm, three attendees reportedly recalled going on the law firm’s weekend retreat in Jamaica, where attorneys were greeted at an evening reception by a woman splayed out on a buffet table with her body covered in chocolate.

After she became an elected official, Boies became Gillibrand’s single largest campaign donor throughout her political career.  She also received substantial donations from Weinstein himself.

Boies helped Weinstein settle a sexual harassment claim and reportedly signed a contract with a private investigation company, Black Cube, that engaged in efforts to foil the New York Times investigation into the accusations against Weinstein.

After stories on Wenstein came out, Gillibrand joined the #MeToo movement calling herself the #MeTooSenator, and continued to accept financial support from Boies’ firm.

In addition to defending her stellar record, Gillibrand might be concerned about her connection to NXIVM, the sex slaver cult that brands women, coming up in the debate.

She has received contributions from NIXVM leader Clare Bronfman.

To hear Gillibrand tell it, she knows nothing of NXIVM. After the shocking news about NXIVM, that operated for 20 years in Gillibrand’s hometown Albany, exploded in the national media in October 2017, Richard Johnson for Page Six, asked Gillibrand if she knew anything about NXIVM.

Gillibrand, through a spokesman, answered she “never heard of this group until she recently read about them in the newspaper.”

Some wondered if she is lying.

Her father, attorney and lobbyist Doug Rutnik worked for NXIVM about a dozen years ago. He was hired as a consultant for $25,000 a month. At the time, NXIVM leader Keith Raniere, now in federal custody on sex trafficking charges, was interested in securing indictments against his former girlfriend, Toni Natalie and cult de-programmer, Rick Ross.

Rutnik was unable to procure the indictments, largely because they had committed no crimes.

Rutnik introduced his younger cousin, Gwenn Bellcourt, an attorney, to the cult.  Gwenn was soon targeted by Raniere for inclusion in the high rank of the secretive cult. Shortly after securing Gwenn, Raniere fired Rutnik and asked for the $100,000 in fees he had paid him returned. Rutnik refused. Raniere’s top lieutenant, Nancy Slazman then claimed Rutnik sexually harassed her. NXIVM sued, threatening to expose the scandal in court filings.  Rutnik paid NXIVM $100,000 in an out-of-court settlement.

Meantime, Rutnik’s cousin, Gwenn was getting deeply involved in NXIVM. Rutnik, determined to rescue her, asked her to marry him on condition she’d leave the cult. She agreed. They wed, and Gwenn became Gillibrand’s stepmother.

In November 2017, Gillibrand said she never heard of NXIVM.

During her 11-year legislative career, Gillibrand has introduced more than 300 bills but gotten none passed although some of her proposals have been included in larger bills sponsored by other elected officials.

Gillibrand has never lost an election.