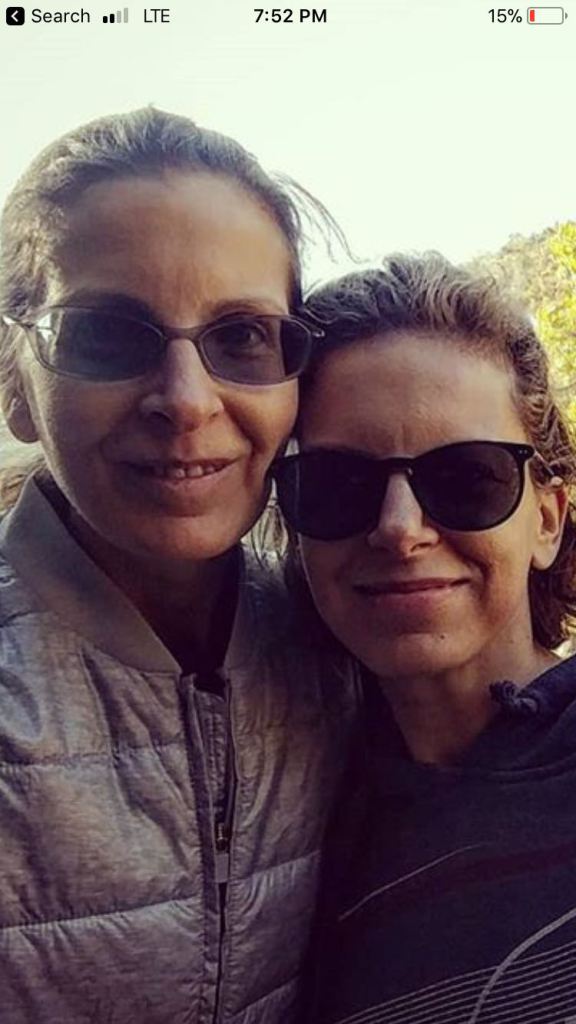 As reported in yesterday’s post, Clare Bronfman is suing me – and evidently, one of the reasons she went to Clifton Park was to further orchestrate the lawsuit.

She asked permission from Judge Nicholas G. Garaufis to get a two-day furlough away from home detention in her Manhattan apartment on the premise that she was going to Clifton Park with her lawyer to work on the defense for her criminal case. She may have misled the court.

Her present lawsuit against me is not for libel – as some have surmised – but arises out of events that took place in early 2008 – when I worked as a consultant for Clare and her sister, Sara Bronfman-Igtet – and uncovered problems with an investment they made in Los Angeles.

When I arrived in Los Angeles in January 2008, the Bronfmans had invested $26 million into a real estate project- a plan to build some 30 hillside mansions. They had nothing titled in their name.

Nancy Salzman owned half and Yuri Plyam the other half of an LLC that owned the real estate. There wasn’t a mortgage or a contract to evidence the Bronfman investment either.

I secured for the Bronfman’s two-thirds interest in the LLC — which gave them majority control. Within a month, I got possession of the properties against hostile parties and procured financing to finish the project – so that the Bronfmans’ would not have to invest additional money to complete the project.

At the time, because of some poor investment decisions and millions spent in litigation against enemies, the two sisters had depleted their initial $120 million trust fund and would not get access to their second trust until their father died. They had already borrowed some $40 million against the second trust, which was to be, I believe, around $500 million each for the sisters, upon their father’s demise.

At the time, Clare and Sara were grateful to me for recovering $26 million in assets. Even Raniere pretended I had done them a good turn.

The present lawsuit probably boils down to a contract – two pages in length – signed by me – and not by Clare or Sara – that spelled out terms of my work on the Los Angeles project.

Raniere negotiated the contract in January 2008.  The contract provided I would receive 1/3 of the net profits of the Los Angeles project and receive a one million dollar advance or draw against profits – which were expected to be more than $25 million – in return for managing and developing the project.

Within an hour of my signing the contract, Raniere ordered Becky Freeman to wire $1 million of the Bronfmans’ money to me. In a legal sense, they may have entered or ratified the contract when they wired the money following my signature on the contract.

After receiving the $1 million, I finished the task of securing the real estate assets for Clare and her sister. I had the project in full gear. The Bronfmans never signed the contract.

One day I questioned Clare about what happened to the $65 million her and her sister lost in the commodities market between 2005-2007.  Raniere had managed their trades.

In explaining the loss, Raniere had told Clare that her father, multi-billionaire Edgar Bronfman Sr., then the President of the World Jewish Congress, had manipulated the commodities market to foil their investments so that Raniere would be embarrassed and, hopefully, Clare and Sara would be angry and leave Raniere.

Clare said she believed Keith’s mathematically perfect formula for commodities trades would have made them richer than her father had he not thwarted Keith by controlling the market.  She said, if she could solve the problem of her father [who was in league, Keith told her, with the Illuminati] then Keith  – because of his genius – could go back to the commodities market and make them all billionaires.

I steered the conversation back to the commodities losses. I told Clare I wanted to see all the trades she and Sara made, and ascertain what happened. I said I did not suspect Keith of wrongdoing – but what if the commodities broker, Yuri Plyam – the same man Keith had used in the Los Angeles real estate deal to manage this project – did not make the commodities trades but lied and told Keith that he did?

I asked for receipts. Proof of any kind. She said she had none. I asked if she recalled any trades that were made – if trades were in orange juice futures, or wheat or corn?  Clare said she did not know. She had no proof of where the money was invested.

I said I was suspicious and planned to investigate. I said I did not think Keith was responsible. Clare said she would talk to Keith and get from him the documents I asked for.

A few days later, I was informed by a NXIVM official that Clare no longer required my services. I was told not to contact her or her sister, or Keith again.  The NXIVM official also demanded I return the $1 million.

I replied that I thought any lawyer or collection agency who recovered $26 million would be entitled to a fee – probably more than a million dollars – and I had done more than just recover assets. I secured the properties, got possession, arranged construction and financing – and primed the project for speedy development. That work was also worth a substantial fee.

In addition, I was the architect of the civil case against Plyam. I retained the lawyer – Bob Crockett – and gathered evidence and secured witnesses. The NXIVM official said Keith did not agree that I was entitled to any money. I must return it all.  I declined and put the million dollars in escrow and never spent it – and prepared to litigate.

Raniere’s first concern wasn’t me. He was determined to go after Plyam.  That took three years. During that time – from 2008-2011 –  I thought little about NXIVM. I went on to other ventures.

The trial against Plyam began in March 2011. During the trial – although I did not appear – my name came up repeatedly. Plyam’s defense was that I wrested the project away from him and gave it to the Bronfmans – which meant in reality to Raniere’s control.

When showed by Plyam’s attorney the contract that included the $1 million payment to me, Clare denied having entered into that contract. She admitted she paid a million to me and added, compared to the $26 million recovered by Frank Parlato, it was well worth it.

Here is a snippet of her testimony:

Q: DID MR. PARLATO DO ANY GOOD FOR YOU BEFORE YOU FIRED HIM?
A: ABSOLUTELY.
Q: WHAT DID HE DO?
A: HE HELPED DETERMINE THAT THERE WAS A SERIOUS PROBLEM WITH A HUGE INVESTMENT THAT MY SISTER AND I HAD MADE,  AND HE WAS WILLING TO BE THE PERSON OUT HERE TRYING TO UNCOVER EVERYTHING THAT WAS HAPPENING. SO I’M VERY GRATEFUL FOR THAT….. [THE $1 MILLION] IT SOUNDED LIKE A LOT OF MONEY. IT IS. COMPARED TO [$]26.43 [MILLION], IT WAS WORTH IT TO US.

Pressed further during cross-examination, in front of 12 jurors, Clare repeatedly denied entering into the contract.  She told the jury she loaned me $1 million without any written agreement.

She won the Plyam lawsuit. The jury awarded her a $10.3 million verdict.

The Bronfmans did not collect any money, however. The litigation – and the way it was managed by Raniere over three years – made Plyam bankrupt.  It was a worthless judgment.

As for the Los Angeles properties, the ones I queued up for development – nothing was done.  The foundations that had been poured were left to ruin as the exposed rebar rusted over time.

Now that the trial was settled and Plyam was bankrupt, it was time to go after me. Clare Bronfman filed a criminal complaint with the FBI claiming I defrauded her out of one million dollars. A grand jury was convened in the Western District of NY.  Clare went before the grand jury.  She was shown the same contract she had been shown in the Plyam trial  – the contract she swore under oath that she never signed and never entered into. This time, however,  she said it was the valid contract.

In front of 23 grand jurors, she now said under oath that she did enter into that contract.

The Assistant US Attorney used her testimony to lead the grand jury to indict me. [The charges were later dismissed from the indictment after the government realized Clare was to be indicted herself.]

The following year, knowing that testimony in the grand jury is kept secret – which meant that her lies would not be exposed – Clare felt free to sue me in New York State Supreme Court. In her verified complaint, she reverted back to her earlier position – that there was no written contract. She said she lent me the money based on an oral agreement and that I never paid her back.

To be fair to Clare, the motive for her swearing in the civil case that there was no contract was that I might not owe her anything if there was a contract since she breached the contract. In fact, if there was a contract, she might owe me millions. I was entitled to 1/3 of the profits. She fired me, hence depriving me of the opportunity to complete the project and earn multiple millions.

In the criminal case, it was different. She had to swear there was a contract because the only thread they had to tie them within the statute of limitations was the written contract – because the contract had conditions that went three years past the original date of the contract.

In the criminal case, it was peculiar. Assistant US Attorney Anthony M. Bruce was made aware of Clare’s contradictory testimony in the civil and criminal cases but chose to ignore it.  He was a friend and college colleague of Bronfman’s attorney, Bill Savino, and it is possible that in trying to be a good friend, he suborned or ignored Clare’s perjury.

Which brings us to the present – to Clare’s recent trip to Clifton Park and beyond. Clare is suing me  – the same lawsuit – over the same million dollars.  We will see what she says under oath when she is deposed and asked about the contract. With Raniere in jail, it may be harder for her to figure out which lie she should tell and when.

For those who want to see the contract that is the focus of the lawsuit – here it is:

Here are a few snippets of Clare’s testimony in the Plyam trial: