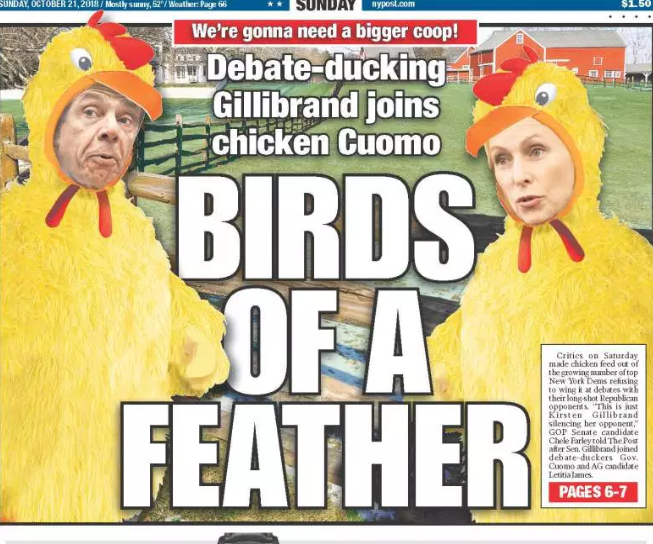 Democratic incumbent Sen. Kirsten Gillibrand has decided to take a couple hours out of her multi state 2020 presidential campaign to enter New York State and square off in a debate against her 2018 Republican opponent for the US Senate – Chele Farley.

The debate will be held Thursday.

Gillibrand was supposed to debate Farley last Sunday.  But on Friday after 6 pm, Gillibrand backed out of her sole debate, garnering for her a great deal of criticism and landing her a spot on the front of page of the New York Post – in a chicken suit.

Gillibrand cited a 17 months old labor dispute and union picketing against Spectrum’s parent company Charter Communications for pulling out of Sunday’s debate to be broadcast on SpectrumNY1.

Yet Gillibrand has appeared on Spectrum NY1 from their studios at least twice this year.

The rescheduled Gillibrand-Farley debate will air on WABC-TV on Thursday, at 1:30 p.m.

Gillibrand is known to waffle on positions based on assessing the mood of voters.

Sen. Gillibrand was getting criticized for one of her positions.

“Hush. Don’t ask any questions. It’s always best on these occasions to do what the mob do,” the transparent Senator said.

“But suppose there are two mobs?” suggested her spokesman.
.
“Shout with the largest,” replied Sen. Gillibrand.

Volumes could not have said more.”

About the uproar over her canceling her debate at the last minute, then after a shit storm in the media over it, accepting another debate later in the week, Gillibrand’s campaign spokesman Glen Caplin said in a statement, “Senator Gillibrand believes deeply that an open public debate is essential to democracy.”

Her father, Doug Rutnik and step mother Gwen Belocourt were both involved with the sex slaver cult NXIVM. Clare Bronfman – leader of the dangerous cult gave her substantial campaign donations.

When asked if Gillibrand had anything to say about NXIVM or her family’s role in it, her spokesman told  Page Six, that she “never heard of this group until she recently read about them in the newspaper.”

Asked if she was planning to run for president in 2020, Gillibrand said earlier this year, “I want to be a New York State senator. …  And I’m 100 percent focused on serving New Yorkers….  I ruled out anything that’s not focused on ’18. So I’m just literally focused on getting reelected and being able to keep serving in the U.S. Senate.”

During this election season, Gillibrand has spent only one day in New York in October, while making five stops on the Presidential campaign trail in Georgia, Michigan, Pennsylvania and Tennessee before capping off a visit to the home of the first Presidential Primary, New Hampshire.