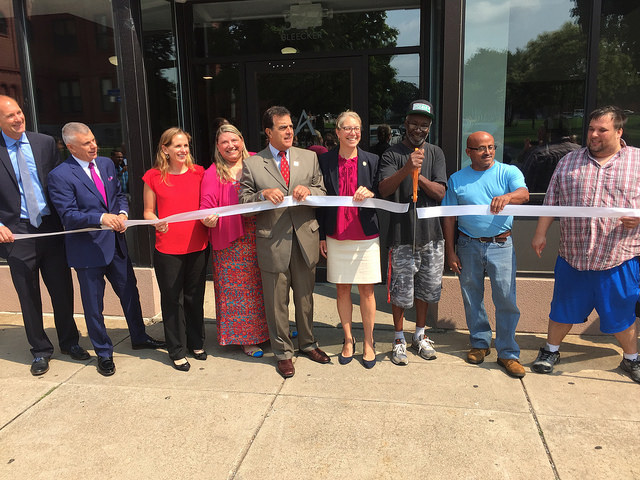 October 24, 2018 – New York State Homes and Community Renewal Commissioner RuthAnne Visnauskas today announced the start of construction on a $10.3 million adaptive reuse of the historic Burrous Building in the Village of Wellsville. The mixed-use development, now known as 23 North, will include 16 affordable homes for adults 55 and up and 5,800 square feet of ground floor commercial space. 23 North is a priority project of the Western New York Regional Economic Development Council.

The long vacant three-story Burrous Building was originally constructed in 1910. The last tenant, Burrous Furniture, closed in 2004. After a partial building collapse, the Village acquired the property. The rehabilitation of the building was designated a priority project by the Western New York Regional Economic Development Council in 2016.

23 North will include 12 one-bedroom apartments and four two-bedroom apartments reserved for adults 55 and up earning 60% or less of the area median income. Building amenities include laundry facilities on the second and third floors and a community room. The commercial space will be the new home of the Village of Wellsville municipal offices.

Located at 23 North Main Street, residents will be within walking distance of retail, restaurants, a hospital and library. There is a bus stop directly in front of the building.

23 North reflects the State’s commitment to providing all New Yorkers with access to safe, affordable housing is reflected in the state’s unprecedented $20 billion, five-year Housing Plan. The plan makes housing accessible and combats homelessness by building and preserving more than 100,000 units of affordable housing and 6,000 of supportive housing. The plan is a comprehensive approach to statewide housing issues and includes multifamily and single-family housing, community development, and rent stabilization. Since 2011, HCR has invested $226 million in Western New York that has created affordable housing for about 9,000 residents.

Empire State Development President, CEO & Commissioner Howard Zemsky, said, “The 23 North project is adding to the positive momentum on Wellsville’s Main Street, thanks to strategic regional support for the creation of affordable homes and walkable, vibrant neighborhoods and city centers.”

Senator Catharine M. Young said, “The Village of Wellsville is the heart of Allegany County and an economic engine with the potential to drive this community towards a bright future. Today, we’ve taken an important step in that direction with the start of renovations on the dilapidated former Burrous Building. Years in the making, the transformation of this blighted site into a beautiful, functional mixed-use anchor property will revitalize the face of downtown while providing valuable commercial space and critically needed affordable housing for our seniors. My thanks go out to Governor Cuomo, Commissioner Visnauskas and all the partners who have committed to this effort. It is a shining example of public-private partnership and an investment in the future of our community.”

Allegany County Chairman Curt Crandell said, “I, along with our entire Board of Legislators, am very pleased to see the 23 North project moving forward. Having an unsafe eyesore transformed into a functional facility is great news for Wellsville and Allegany County.”