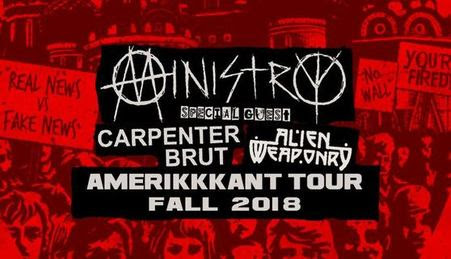 Video conducted by James Currie / In The Loop Magazine
Ministry teams up with REVOLVER to continue an exclusive video interview series with the album’s personnel discussing memories of studio sessions and the lasting legacy of the pioneering album, “The Land Of Rape And Honey,” which celebrated its 30th anniversary on October 11.
To see the two-part interview in full, head to REVOLVER’s website:
https://www.revolvermag.com/music/ministrys-al-jourgensen-land-rape-and-honey-30
After the first episode with Chris Connelly premiered earlier this month, a new release features a two-part interview with the man himself, Al Jourgensen. The creator, frontman and lyrical powerhouse behind Ministry, Jourgensen discusses how “The Land Of Rape And Honey” almost never came out due to its controversial album art, the influence of producer Adrian Sherwood (who had worked with Ministry on the ’86 album Twitch) and if there will ever be a remastered edition, among other entertaining mementoes.
Next in the video interview series will be a brand-new interview with Paul Barker, who was an essential musician on the recording of “The Land Of Rape And Honey” and discusses all things Ministry after more than a decade break from the band. Look for that episode on REVOLVER soon.
You can also see a visual collage of the record’s finest moments, created by Ben Garcia:
https://www.youtube.com/watch?v=m6dAnAD2kfI
Al Jourgensen also announces an appearance at the Denver Film Festival on November 9, taking part in a Q&A session after a screening of the award-winning documentary “Industrial Accident: The Story of Wax Trax! Records” along with Jello Biafra and Frankie Nardiello (AKA Groovie Mann).