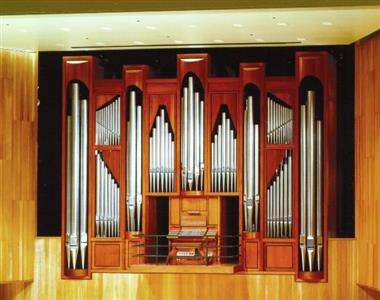 BUFFALO, N.Y. — The University at Buffalo Department of Music is pleased to present UB faculty member and organist/pianist Roland E. Martin in recital on Friday November 2, 2018 at 7:30pm in Lippes Concert Hall in Slee Hall.  He will be joined by five colleagues from the UB Music Department and the greater Buffalo community to present a concert of his own works, as well as one of the two full organ masses by François Couperin.

Roland E. Martin: A Rose Beside the Water

UB Music Department concert tickets will be available through a variety of outlets this year.  The least expensive and easiest way to purchase tickets is online at www.ticketfly.com.  For those wishing to obtain tickets in another manner, there are options according to the following pricing structure:

$22 in person at the door (one hour before concert time)

$17 in person at the door (one hour before concert time)

All UB students with a valid ID will receive one complimentary ticket to all UB Music Department events.

Couperin’s two organ masses were composed at the young age of 22, and were two of his earliest works.  Although they were composed for use in the typical religious setting (the first for ordinary parish use and the second for convents of monks and nuns), they were deemed by one of his most ardent supporters, Michel-Richard de Lalande, to be worthy of public performance.  Mr. Martin performed both of these masses in recital at UB several years ago, with the vocalist singing antiphonally from across the concert hall.  The second of the masses is offered again this year by way of special request.

The second half of the program is very dear to Mr. Martin.  Not only are the works composed by him, but they include reflections, some very personal, on the passing of those that are loved and admired.

Roland E. Martin is a member of the music faculty of Buffalo Seminary, Canisius College, and the University at Buffalo. He serves as organist/choirmaster and Director of Music at St. Joseph University Church, Buffalo, and Artistic Director of the Freudig Singers of Western New York.

An accomplished composer, Mr. Martin has more than 100 works in publication, with a number of commissions from universities, colleges, choral societies, churches and various other organizations and individuals. His Annunciation (2000) was premiered by the Buffalo Philharmonic Orchestra in March 2000. His Medieval Triptych (1994) was heard on a national television holiday season special from Washington D.C in 1998 and again in 2001 on PBS. His collaborations with painter Catherine Parker have become legendary, including three song cycles. A Rose Beside the Water (on poetry of Pablo Neruda) has received performances in several countries, and resulted in a book containing the paintings, poetry and a recording of the music.

As conductor, Mr. Martin has worked primarily in the field of opera.  As organist, Mr. Martin has given recitals throughout the United States, including the National Cathedral in Washington, D.C., and has performed in Canada, Spain, France, Germany, Austria, Italy and England, as well as annual concerts in Belgium.  In 1986, Mr. Martin was honored to perform the New York premiere, and the third American performance, of the complete collection of J.S. Bach’s recently discovered Neumeister Chorales. In September 2000, he gave a critically acclaimed performance of Bach’s Art of the Fugue at U.B.’s Slee Hall, and in October 2000, he debuted as soloist with the Buffalo Philharmonic Orchestra in a performance of the Rheinberger Organ Concerto No. 2.