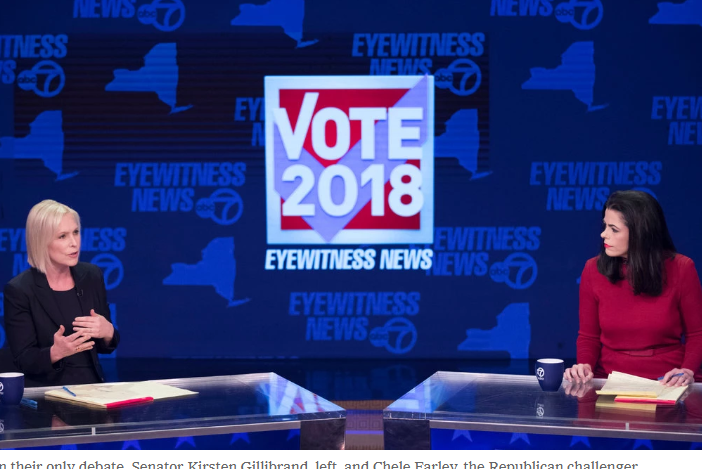 In her debate yesterday with her senate opponent, Kirsten Gillibrand told the world she is not running for president in 2020.

Her Republican opponent, Chele Farley called on Gillibrand to tell New Yorkers about her 2020 intentions since, despite it being campaign season, Gillibrand has spent only three days in New York this month, and spent the vast majority of her campaign funds out of state.

When WABC-TV anchor and debate moderator, Bill Ritter, asked Gillibrand directly if she was going to run for president, Gillibrand answered, “I will serve my six-year term.”

If that is true, then Gillibrand has just announced she is not running for president in 2020.

Farley, a private equity executive and first-time candidate, is considered a long shot and polls show Gillibrand with a commanding lead in the senate race.

But there was no mistaking Gillibrand’s on-the-record pledge to serve the full six years of her term and unless she is a liar, the public can hold her to her promise.

However, sources on the left are likely going to give her a pass on this little white one – as, they claim, lies are necessary in perilous times like these – with such a dishonest president.

When she was in Congress, Gillibrand earned the nickname Tracy Flick – after the dishonest and ruthless character in the 1998 novel Election by Tom Perrotta – and portrayed by Reese Witherspoon in the 1999 film adaptation.

The debate which was 30 minutes in length is to be the only senate debate between Gillibrand and Farley. it was hosted by ABC7 Eyewitness News.

Throughout the debate, Farley pressed Gillibrand on her lack of accomplishments during her 12 years in Washington and on her radically shifting positions on a range of issues including: her call to abolish Immigration Customs and Enforcement (ICE); her plan for a government takeover of healthcare; and a failure to return over $800,000 in campaign contributions from Harvey Weinstein’s law firm.

When asked by ABC’s Bill Ritter about the migrant caravan headed to the US border with Mexico, Farley said, “People are calling it a caravan, I call it an invasion.”

Farley challenged Gillibrand to explain to New Yorkers how she plans to pay the $32 trillion tab to take over the health care system, “Medicare for All.”

Gillibrand responded to every question, except one – by invoking and criticizing President Trump: his stance on immigration, health care or climate change. The only answer in which she did not mention the president was when she said she “will serve my six-year term” as senator.

Farley criticized Gillibrand for living in Washington D.C. and failing to deliver for New Yorkers. During that time over 1 million people have moved out of New York.

The debate, which was live streamed Thursday, will be aired in its entirety on WABC “Up Close with Bill Ritter” and on some ABC affiliates and radio around the state this Sunday, October 28 at 11AM.

MK10Art: NXIVM is more than some sex group with kinky participants
No mention of NXIVM reported in Gillibrand’s 30 minute debate; Gillibrand announces she will not run for president in 2020