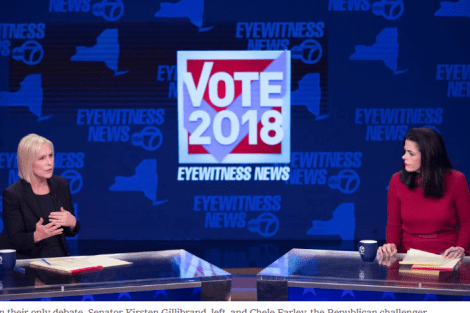 Based on reports, there was no mention of NXIVM in the U.S. Senate candidates debate between Chele Farley (R, C, Reform), and incumbent Kirsten Gillibrand.

It is to be their one and only debate and was hosted by ABC7 Eyewitness News. At Gillibrand’s insistence, the debate was limited to 30 minutes.

Throughout the debate, Farley reportedly pressed Gillibrand on her lack of accomplishments during her twelve years in Washington and on her radically shifting positions on a range of issues including: her call to abolish Immigration Customs and Enforcement (ICE); her plan for a government takeover of health care; and a failure to return over $800,000 in campaign contributions from Harvey Weinstein’s law firm.

When asked by ABC’s Bill Ritter about the migrant caravan headed to the US border with Mexico, Farley said, “People are calling it a caravan, I call it an invasion.”

Farley challenged Gillibrand to explain to New Yorkers how she plans to pay the $32 trillion tab to take over the health care system, “Medicare for All.”

Finally, Farley called on Gillibrand to come clean with New Yorkers about her 2020 intentions. Gillibrand, who has spent only three days in New York this month and spent the vast majority of her campaign funds out of state – pledged to serve a full six-year term.

When the WABC-TV anchor and debate moderator, Bill Ritter, asked if she was going to run for president, Gillibrand answered, “I will serve my six-year term.”

If that is true – which some observers doubt – then she just announced she is not running for president in 2020.

In closing, Farley called out Gillibrand for living in Washington D.C. and for a failure to deliver for New Yorkers. Since Gillibrand was appointed as U.S. Senator, over 1 million people have moved out of New York.

The debate, which was live streamed Thursday, will be aired in its entirety on WABC “Up Close with Bill Ritter” and on some ABC affiliates and radio around the state this Sunday, October 28 at 11AM.

GIllibrand announces she will not run for president in 2020; during debate she vowed to serve six year senate term if reelected
Nancy Salzman and DOJ jointly agree on release of forensic copies of computers to other defendants
Comment