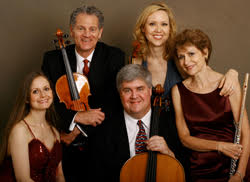 The 94th season of the Buffalo Chamber Music Society continues on Tuesday, November 13th with a performance by The American Chamber Players.  The concert begins at 8 pm in the Mary Seaton Room of Kleinhans Music Hall and will be preceded by a talk with the artists led by Miles Hoffman, NPR music commentator and founder and violist of the American Chamber Players.  The program includes works by Schubert, Gaubert, Raimi & Lekeu.  All first performances on our series.

Among today’s most exciting and innovative chamber music ensembles, THE AMERICAN CHAMBER PLAYERS began in 1985 as a core group of artists of The Library of Congress Summer Chamber Festival.  The ensemble performs repertoire ranging from familiar masterpieces to neglected gems to newly commissioned American works, and their fascinating and delightful programs with varied instrumental combinations have been as enthusiastically praised as their extraordinary, dynamic performances.

They have toured throughout North America, engaged and re-engaged by prestigious concert series from Florida to  British Columbia, and they have traveled to Paris for a series of special gala concerts at the Paris Opera and the Bibliothèque Nationale. For many years the Visiting Artists in Residence at the Society of the Four Arts, in Palm Beach, FL, and the resident ensemble of the Kreeger Museum June Chamber Festival, in Washington, DC, they have also been heard countless times on National Public Radio’s Performance Todayand on local radio stations throughout the United States.

Tickets for this concert are $30 and may be purchased at the door or online at www.bflochambermusic.org.  STUDENTS ARE FREE.