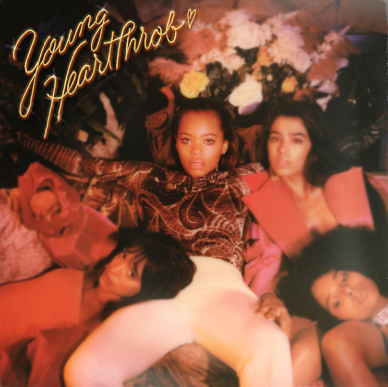 (October 26, 2018 – Los Angeles, CA) Today, Kodie Shane shares the music video for her single “Flex On Me (featuring TK Kravitz)”. The video premiered earlier on Noisey, and can be viewedHERE!

The visual amplifies anticipation for her anxiously awaited full-length debut, Young HeartThrob [Epic Records], which is set to arrive on November 9th, 2018. Check out the official album cover above, which Kodie revealed to her fans yesterday.

Once again, the rising Atlanta hip-hop starlet delivers an unpredictable and undeniable clip to complement her irresistible, inimitable, and incendiary musical stylings. Directed by Child Artt, the cinematic story unfolds onscreen as Kodie’s voice takes hold during spacey bars punctuated by a slick cameo courtesy of TK Kravitz. “Flex On Me” instantly pulls listeners further into her world and unbreakable embrace.

Last week, she released the song “Thinking Bout U.” Instantly, it earned various tastemaker kudos. HighSnobiety wrote, “The Atlanta rapper recalls the precious moments experienced with a significant other,” and Complex called it, “an album cut that offers up another example of why Kodie is one of Atlanta’s finest out right now.” Then, Vibe put it best, “Not yet 21 years old, Shane is set to make significant noise in the industry as one of 2018’s most promising young artists.” In anticipation of her debut studio album, Kodie Shane previously shared a compelling anime-inspired video for “Love & Drugz II (featuring Trippie Redd)” and an electrifying clip for single “Sing To Her,” both set to appear on Young HeartThrob.

Young HeartThrob illuminates a wide creative palette for Kodie. It dips in and out of moments of pop bliss, hip-hop grit, and future-facing alternative ambience. She proves that there’s nobody quite like her.

Fall for Young HeartThrob in 2018.

One of Atlanta’s freshest and fiercest voices, Kodie Shane has quickly become a unanimous fan and critical favorite. She offers a fresh take on Hip Hop and Pop, with tightly-wound rhymes, clever lyrics and ear-worm melodies over buoyant, genre-blurring beats that have become her calling card. Across 2016 and 2017, she made a name for herself by serving up a series of hits and critically adored projects. 2016’s debut EP Zero Gravity includes the fan-favorite “Sad” [feat. Lil Yachty], which generated millions of Spotify streams, followed by the runaway success of “Drip On My Walk.” Shanespent 2017 creating even more music, with the ten-track Big Trouble Little Jupiter mixtape and seven-track Back From The Future EP.

Across her releases, the artist has garnered praise from The Fader, Pitchfork, Complex, Noisey, Vogue, Pigeons and Planes, Paper, Nylon, W Magazine, Interview Magazine, Mass Appeal and more, with Billboard recently calling her one of 2018’s biggest Pop Stars to watch. Most recently, she covered Teen Vogue’s coveted 21 Under 21 Most Influential issue and Galore’s Spring 2018 Music issue. The budding star has also drawn rave reviews on the stage, having spent much of the past few years on the road, headlining shows around the world as well as opening for the likes of Lil Yachty, Lil Uzi Vert, The Internet, Jhené Aiko, Snakehips, Billie Eilish and more. With her debut album due imminently, Kodie Shane has become the most exciting new artist to watch in 2018.