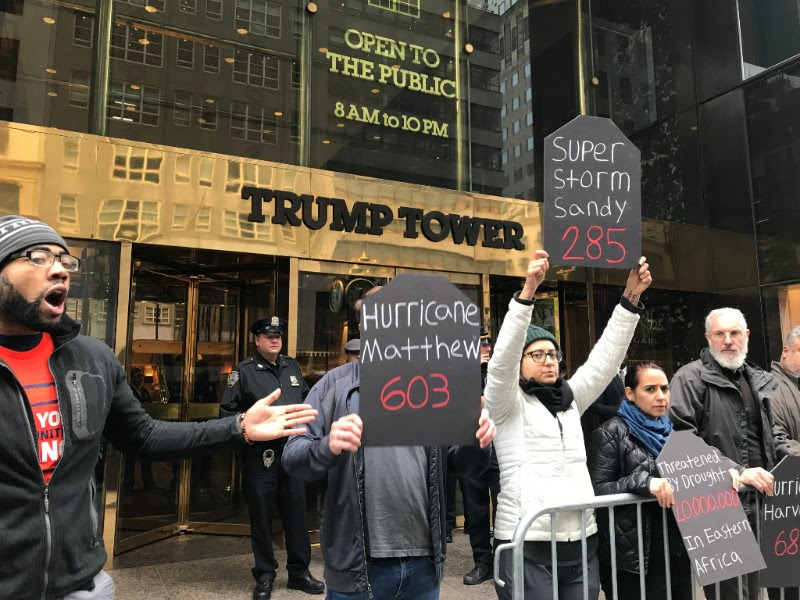 New York, NY – Today, New Yorkers commemorated the sixth anniversary of Hurricane Sandy landing in New York by bringing the message of science, facts, and the reality of anthropomorphic climate change to President Trump’s Manhattan lair. Over 50 members of the NY Renews coalition marched to Trump Tower in Manhattan and held a die-in, blocking the entry for most of the morning. This action amplified the call for Governor Cuomo to lead on climate action, as President Donald Trump continues his denial of climate change.

Hurricane Sandy killed 53, displaced thousands, and caused an estimated $20 billion in damages that are being felt by hard-hit communities to this day. Earlier this month, the United Nations released a dire report that called for drastic changes in the next 12 years in order to avert the worst impacts of the climate crisis (See the report here). Following the release, President Trump doubled down on his climate skepticism during an interview with Leslie Stahl on CBS.

In the face of inaction from the federal government, New York State has an opportunity to lead on climate by passing the Climate and Community Protection Act (CCPA) – bold climate legislation designed to take on climate change by mandating an economy-wide transition to renewable energy while prioritizing low-income communities of color and good, green jobs. The legislation has failed to pass in the Senate for three consecutive years.

Eddie Bautista, Executive Director of the New York City Environmental Justice Alliance, said “Actions like this one today are paramount to standing up to the willful and harmful climate ignorance that cascades out of the White House on a daily basis. The policies of the Trump administration are a direct attack on the communities most impacted by the changing climate and life threatening pollution. It is time for Governor Cuomo to step in and protect New Yorkers from Trump’s dangerous agenda, by pushing for the enactment of aggressive climate legislation that prioritizes action in our most vulnerable communities.”

Additionally, today at 12 PM at the Thurgood Marshall Federal Courthouse in New York City, a rally for the #TrialoftheCentury took place. The nationwide action is in support of the landmark climate change lawsuit Juliana v United States, in which the plaintiffs assert that the United States’ actions have caused climate change, and have violated the youngest generation’s constitutional right to life, liberty, and property, as well as failed to protect essential public trust resources. The trial begins today in Oregon.

Frequently Asked Questions About Transitioning Into Medicare…
Shadow State: Allison Mack is no different from an Inner City Pimp