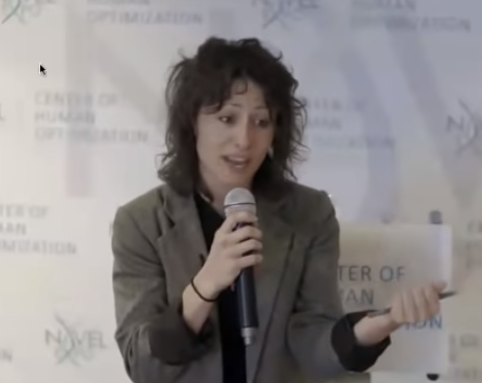 Will she or won’t she?

Dr. Danielle Roberts was scheduled to appear at the Navel Expo at the Sheraton Time Square on November 10–11 NYC.  The website for the Navel Expo has removed her name and picture – as if she vanished like a ghost – sometime in the last month.

Roberts, a licensed osteopath and follower of Keith Raniere, is the woman who wielded the cauterizing pen that branded women with Raniere’s and Allison Mack’s initials on their pubic region, according to several women who were branded.  It is been estimated that as many as 150 women were branded by Dr. Roberts.

Back on September 28, the Daily Beast contacted Alex Lubarsky, the Founder of the Navel Expo, to ask him about Dr. Roberts’ role at the Navel Expo.

He told The Daily Beast that he was aware of allegations against Dr. Roberts, and said, “[S]he’s not at liberty to discuss them.”

Lubarsky continued, “Just to be clear, she’s speaking not [on behalf of] whatever other organization she was involved with, she’s speaking as a physician who’s focused on human optimization. So that’s the only part of Dr. Roberts that I’m interested in.”

Lubarsky explained that he’s known Dr. Roberts “for over 10 years. And from knowing her as long as I have, I just couldn’t believe that she would do something intentionally sinister. It didn’t ring true to me on any level.”

Dr. Roberts participated in the Navel Expo for the last three years.

MK10ART has done several exquisite paintings of Dr. Roberts and her branding efforts.

At the time of his Daily Beast interview, Lubarsky said despite what has been said about Dr. Roberts, he hasn’t “changed [his] mind about her.”

Maybe that changed as he learned more …. In any event, Dr. Roberts’ name and picture no longer adorns the Navel Expo website. Was she dis-invited because of the controversy?

Did she lose her medical license and hence cannot attend?

Did she choose not to appear because of the likelihood the media will appear?

We don’t know. All we know is she’s gone and apparently forgot nothing but to say goodbye to the women she disfigured.

At the risk of being repetitive, may I just add  — “Viva Executive Success!”