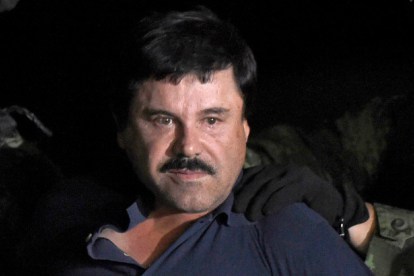 Joaquin Archivaldo Guzmán Loera AKA  “El Chapo,” 61, the king of the Sinaloa Cartel, which distributed coke, heroin, methamphetamine, and marijuana into America, is going on trial in Brooklyn.

He is housed in the same prison as Keith Alan Raniere AKA Vanguard, 58, who distributed world salad, tax evasion, extortion, fraud, and sex trafficking is going on trial in March.

For decades, El Chapo directed a billion-dollar enterprise, first from his mountainous stronghold in the Mexican state of Sinaloa, then, following his 1993 capture, from prison. After a 2001 escape, he kept the machine moving while on the run, hiding for 13 years. He was caught, in 2014, then made another escape.  He was recaptured in early 2016 — and extradited to the United States in 2017.

For decades, Raniere directed his cult from the suburban stronghold of Clifton Park NY. Following the launch of an FBI investigation, Raniere fled the USA for Mexico in late 2017. He kept the cult moving while on the run, hiding for six months in luxurious villas in Monterrey and Puerto Vallarta. He was caught on March 25, 2018 — and deported to the United States the following day.

Both men have been held in detention at the Brooklyn Metropolitan Detention Center.

The trial against El Chapo is set to start in Brooklyn federal court, with jury selection set to start Monday, and opening arguments set for November 12th. The trial is expected to last from two to four months. He faces a 17-count indictment for his role as the head of the cartel, including money laundering, and firearms and murder-conspiracy charges.

The trial against The Vanguard is set to start in Brooklyn federal court, with jury selection set to start in early March and opening arguments set for Marc8. The trial is expected to last from six weeks to two months. Raniere faces a 7-count indictment for his role as the head of the racketeering and sex trafficking syndicate and the specific charges include money laundering and forced labor charges.

The El Chapo trial has been repeatedly delayed, as Chapo’s defense attorneys requested the trial date be pushed back in light of the mountains of evidence being brought by the prosecution. The latest hold-up came as lawyers for the defense complained to Judge Brian Cogan that a last-minute dump of some 14,000 pages of new evidence warranted yet another delay, as they needed time to translate it into Spanish for their client and review the evidence.

The Raniere trial has been repeatedly delayed because of a superseding indictment and because of Raniere’s and the other defendants’ defense attorneys” arguing over privilege issues in light of the mountains of evidence being brought by the prosecution. The latest hold-up came as lawyers for the defense complained to Judge Nicholas G. Garaufis that the prosecution is delaying turning over some 12 terabytes of evidence from 80 electronic devices that were seized from the home of Raniere’s alleged co-conspirator Nancy Salzman.

On Tuesday, Cogan admonished the prosecutors for bringing more to the table than they needed to convict him — including accusing him of direct involvement with at least 33 murders.

Garaufis admonished the Raniere defense team for remaining silent, thus refusing to agree to a delay in one hearing and then agreeing to it at the next hearing.

El Chapo made a name for himself concocting new ways of getting coke and heroin out of the fields of Colombia and Mexico and into the veins of eager customers up north.

Raniere made a name for himself concocting new ways of getting women to be enslaved, including branding them on their pubic region.

In one particularly gory paragraph, prosecutors claim a Sinaloa sicario specially outfitted a murder house with plastic sheeting for the walls and a drain specifically designed to catch blood from murder victims.

Central to the El Chapo case is likely to be the testimony of Chicago-born drug traffickers named Pedro and Margarito Flores, who have been under government protection for nearly a decade, ever since their decision to flip on El Chapo.

Pedro and Margarito Flores, identical twins raised by a drug-trafficking father, built a massive trafficking network that supplied wholesale shipments of narcotics to dealers in Chicago, with the drugs spreading out across the country from there.

Central to the Raniere case is likely to be the testimony of Nancy and Lauren Salzman, who have been under house arrest for three months.

Nancy and Lauren, mother and daughter, were shared by their sex -trafficking Vanguard, built a massive MLM network that stripped heiresses and slender actresses out of their wealth, and teen girls out of their virginity.

Hogan, the DEA agent who stared Guzman in the face in a Mazatlán parking garage on the morning Mexican Marines pulled him out of bed in 2014, cautions against underestimating El Chapo.

“He’s where he belongs, but you can guarantee he’s thinking about the next step,” Hogan says. “What that is, I don’t know. But his mind’s always running.”

Frank Parlato, the blogger who first broke the Raniere branding story and predicted his arrest before Mexican police pulled him out of his Mexican sex lair, cautions against underestimating Vanguard.

“He’s where he belongs, but you can guarantee he’s thinking about the next step,” Parlato says. “What that is, I don’t know. But his mind, which he says is the smartest mind in the world, is always running – most likely in the direction of trying to throw his co-defendants under the bus.”