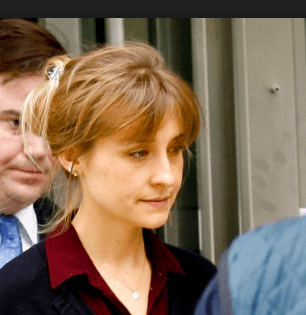 In my understanding of DOS’ bizarre hierarchy, Lauren Salzman was the slave of Allison Mack.

(I hate talking about people as each other’s slaves.)

Regardless, Allison and Lauren were as thick as thieves and it is difficult to imagine Lauren doing anything in DOS without first consulting Allison.

As for the neighbors in Clifton Park and Knox Woods, most people want to live their lives with the least amount of hassle possible.  Life is difficult enough as it is.  I feel sorry for the neighbors.

“Who’s that walking by?”

“Oh, it’s just Keith Raniere and six of his girlfriends/sister wives out for an evening stroll.”

And today people are more tolerant of alternate lifestyles.  So yes, Lauren Salzman is a slave to both Raniere and Allison Mack.

A video on this very topic: https://www.youtube.com/watch?v=-bvaycub1Eo

Now let us discuss something criminal alleged by the DOJ:

An aspiring Brooklyn actress, who the DOJ calls Jane Doe 1, was one of Allison Mack’s slaves. As required in DOS, she provided damning blackmail-worthy collateral to Mack.

One night, Mack ordered Jane Doe 1 to meet Raniere and tell him she would do anything he asked.  Raniere led her to a house, directed her to remove all her clothes and made comments about her naked body. Raniere then blindfolded Jane Doe 1, led her into a car and drove her somewhere, then led her, still blindfolded, through some trees, into what she believed was a shack, and tied her to a table.

There was another person in the room, but Jane Doe 1 did not previously know was present. While Jane Doe was tied down, naked and blindfolded, this unknown person began performing oral sex on Jane Doe 1 as Raniere circled the table making comments.

Jane Doe 1 was horrified and frightened. She did not want to participate in this cruel and bizarre sexual activity but believed that if she did not obey, her collateral could be released.

I believe Jane Doe #1 is someone we don’t know yet.  The very point of NXIVM setting up Allison Mack in Brooklyn was to entice ambitious but unknown actresses to join the sex slave cult.

Allison Mack drove Jane Doe #1 up from Brooklyn and handed her over to the Vanguard. Jane Doe was later blindfolded and led through the woods to a shack where she was tied to a table and sexually assaulted by another person while the evil Vanguard made commentary.

Not Keith Raniere, the Vanguard himself. He was too busy thinking great thoughts and pondering the mysteries of the universe.

Jane Doe #1 in all probability was sexually assaulted by Allison Mack herself.

What Crimes – And Who – Will Be Included In Future Superseding Indictments?
Reader: Prefect is the mother lode of witnesses
Comment