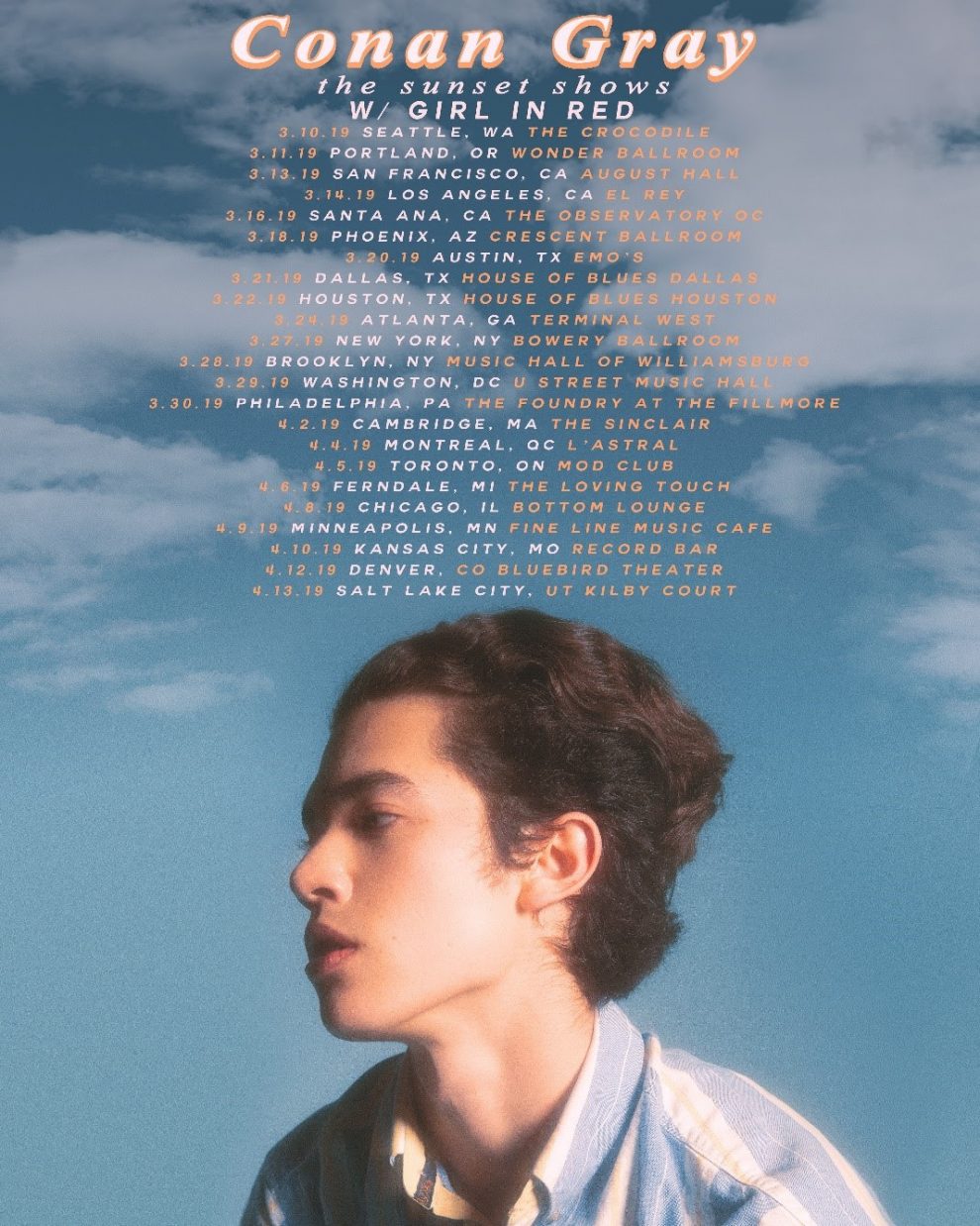 NEW YORK, NY (November 9, 2018) — Buzzing 19-year-old bedroom pop singer-songwriter Conan Gray will return to the road in Spring 2019 as he just announced the dates for his North American tour. The run kicks off March 10 at The Crocodile in Seattle, WA, hits major markets across the country, and ends March 28 at Music Hall of Williamsburg in Brooklyn, NY.

Check out the full itinerary below. Tickets go on sale today at https://conangray.lnk.to/TheSunsetShows

An undeniable performer with a rabid and rapidly growing fanbase, he immediately sold out every show on his recent tour. These lives shows represent the power of his connection to the audience as he quietly has become a phenomenon. Fans who purchase a ticket will receive an instant download of the upcoming Sunset SeasonEP upon its release on November 16th via Republic Records.

Last week, Conan shared the music video for his new single “Crush Culture.” In addition to clocking over 500K Spotify streams in under seven days, its cinematic music video eclipsed 700K YouTube/VEVO views. The Fader claimed, “Conan Gray’s new single is for everyone who has ever got a text and been left disappointed when it turned out to be from their service provider,” while Billboard dubbed it, “an anthem for loveless individuals who are fed up with watching romance happen from the sidelines.”

“Crush Culture” followed hot on the heels of his fan favorite millennial call-to-arms “Generation Why.” To date, the track has clocked 3 million Spotify and YouTube views combined, in addition to receiving widespread critical acclaim. Praising the single, Idolator wrote, “If this is any indication, Conan is definitely One To Watch.”

Armed with nothing more than Garageband and a cheap microphone taped to a lamp, Conan Gray rose out of the small-town community of Georgetown, TX to widespread fan praise in 2017.  An ode to his humble beginnings, Conan’s debut single “Idle Town” clocked 10 million-plus YouTube views and 15 million-plus Spotify streams since release.  The single earned him acclaim with a massive online following and landed a deal with Republic Records. After writing all of the forthcoming songs, Conan joined forces in the studio with producer Dan Nigro [Carly Rae Jepsen, Sky Ferreira], to finalize Sunset Season EP featuring “Generation Why” and “Crush Culture,” arriving November 16 via Republic Records.