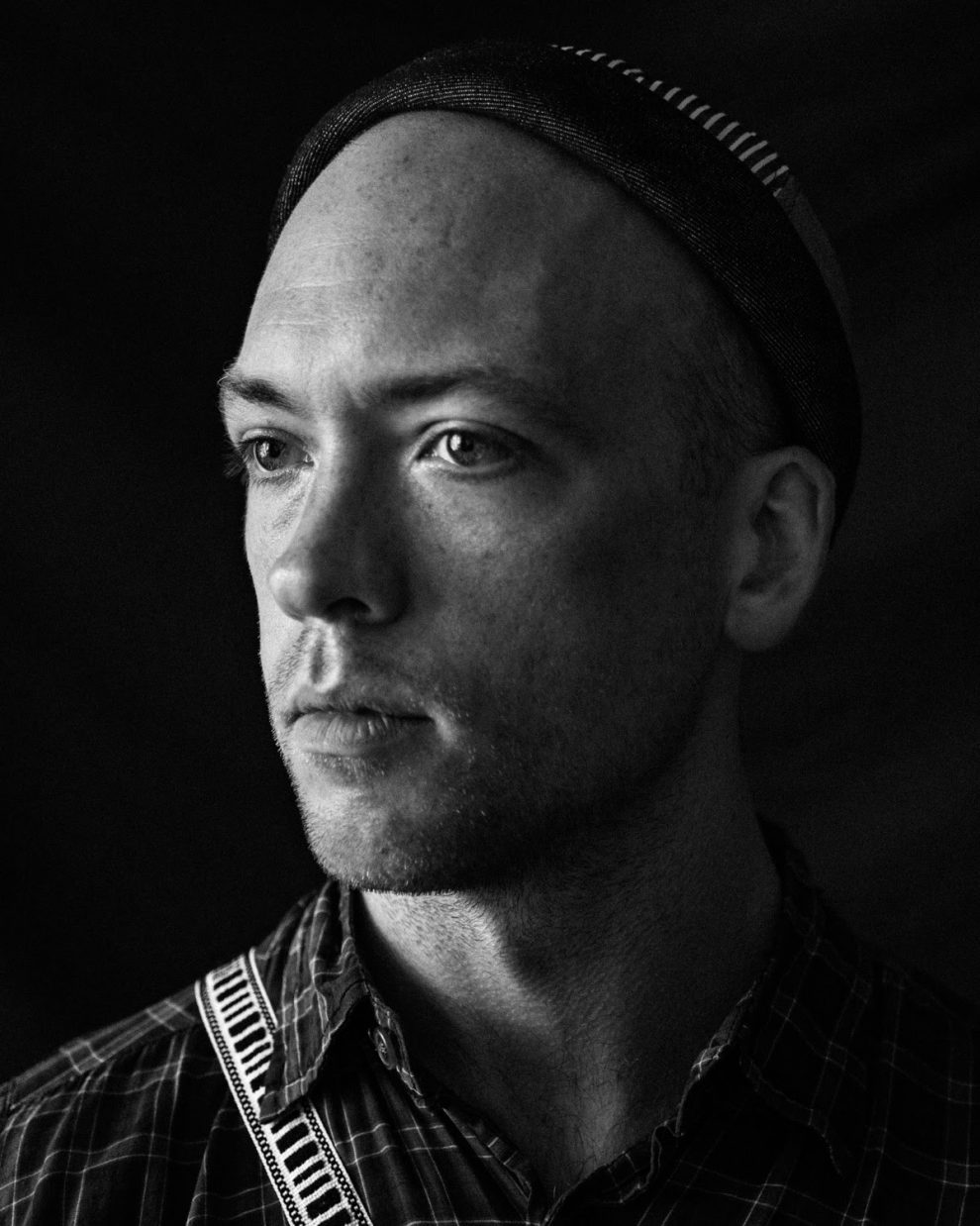 Dream-time, work-time, play-time, ceremony-time, time counted and time uncountable … Time like a desert with sinuous lines unbroken; like a forest with trees that mark space, territory, barlines; or Time like an exit ramp, a cloverleaf highway interchange with its traffic, speed shifts, and the roar of engines… The time it takes a fern to grow, an egg to dry, a bullet to fire, a shoreline to erode …  or a body to touch the ground after a leap; or a composition to get under the fingers and into the brain until all of the parts sing in simultaneity. Dustin Carlson’s music bespeaks a fascination with the many varieties of time, its colors, flavors, densities, textures; the motions of time, its extremes of slow growth and quick change. And also with the layering of time, the machinery of orbits, concentric loops, the human body that is a cosmos of looping circulatory systems escaping gravitational force to lumber into movement and execute some flashy moves at a party, at a ceremony, with stars in its veins, a sun in its stomach and arms that span galaxies … this is what only music, when it is truly music, can reveal and teach. Funk is the preacher….

“Sun Squelch” Nearly the whole piece fits over one rhythmic duration, so it’s definitely about layering, spreading out phrases and shrinking them, macro micro, closing in and opening up. The alto solo; Nathaniel is a deep ensemble player, I think the concept of “soloing” is vague to him, he’s always balancing himself in the mix of the band, he’s super responsive as an improviser and I thought it would be refreshing to hear him play over a repeating figure, for me the result is beyond satisfying. My other favorite part is the Coda which is the head out transposed, played in half time, and retooled a bit, i love the spaciousness of it and the sound that Mitch chose to use on prophet which almost doesn’t register as a voice, super subtle.

Micro to macro and back and forth. Look through a microscope into a drop of pond water, it’s bursting with life: zigzagging arthropods, swaying algae, bopping bacteria. Zoom in further to the molecular level, revel in an architectural stillness that dates back to before the first amoeba, then zoom out until you are yourself standing on the edge of the pond. It’s a sunny day, jump in, feel the cool splash on your skin.

“For Your Safety and Convenience” This one came from looking at a spectrograph of Winchester cathedral bells and sorting out the chord that could be derived from it and applying it to the guitar. The guitar is tuned CGDGBE for this one. First half is basically a solo piece that I orchestrated for quartet and the second half came out of listening to the band Malignancy. Like all the tunes on the record this one lives in its own harmonic world which is derived from that bell chord. Dig the altissimo and synth double. Guitar is playing bass line and trumpet part simultaneously in the penultimate section, something I was proud of getting together.

Music is Utopia. Resonance, sonance of waveforms mirrored by the groove; the desire for a perfect intuitive continuity between harmonic ratio and rhythmic phrase is realized here on every piece of this album, using the resources of all music known, heard, unheard by the mind/body complex of a new millennium of musicians cross-pollinating the giant Archive … What comes from Jazz, to my mind, is the commitment to PEOPLE – persons who are each a sound-world, a syntax, a particular way of gravitating around the beat – a polyhuman polyphony. Out of Time come the sounds, and out of the sounds come the bodies (and not the other way around as everything that is not music will tell you…)

“Watherston” The oldest tune on the record (written in 2009-2010), named after the loft I lived in in the South Bronx. We lived in a commercially zoned building beside the 3rd Avenue Bridge, bathroom in the hall, no heat on nights and weekends, big windows, cement everything. Musically I was attempting to write something that sounded like one idea moving through different harmonic feelings- I was going for the same type of journey my ear takes when I listen to the Bartok String quartets, that thing where the theme never disappears but just keeps coming freshly at you.

And out of the bodies, again the sounds. Sounds that move light and dancey – or suddenly are skewered by a granular revelation of static space; sounds that get heavy like an atom the size of a strawberry burrowing with excruciating slowness down to the center of the earth – or that in a flash escape the pull of our harmonic condition and soar out of the stratosphere to converse with angels and asteroids. One easily overlooked but essential aspect of the compositional artistry here is in the bridges between. The joints and pivots from scale of duration to another.

“Daytime Rituals” So a lot of the music is for me about natural movement, as in anti grid, circular beats, bodies undulating. A dance based on sensation. Internal order expressed by inevitable disorder. Mistakes that have a good feeling are prizes in the music. Almost all of the movements in the compositions are entered/exited by a sort of cross fade, a lot of things are meant to sneakily enter your ear, much is meant to be heard on the third or fourth listen. I was trying to make something that even I wouldn’t fully understand until I heard it many times. There’s a lot that’s ugly, though I find the harmonies to be beautiful in a multicolored sort of way; each movement for me has its own identity which I like. There’s some humor in there too…

Trace the latticed gestures of a ceremony in the air a polis of sound appears, a community of ears that agree to see together. Traceries that projected from your speakers onto the surfaces of your kinetic consciousness will enact at your bidding the ritualistic splendor of Dustin’s designs. Designs draped in sonic flesh, overtone-meat, sinews and ligament of line. How many songs in one?

“Three Part In(ter)vention/Lattice Fingers” The opening piece is me realizing that yes you can play three distinct lines on one guitar, and what that does to the lines in terms of setting their limits and direction, its been a fruitful concept for me in terms of composing. Lattice is derived from the in(ter)vention, the bass line is different bits of the three parts, the guitar “melody” is about hearing rhythms on top of rhythms, it comes from listening to a lot of great drummers, Kate’s playing has been a big influence on my writing.

Three voices becoming one guitar whose resonance is itself refracted through the prism of two reeds, one brass, a double-bass and set of drums of cymbals. Each individual has a part to play in the particular world it inhabits. The music is an interdependent ecologically-minded polyphony. Its players are the children of wolves and electricity, at turns feral, studious, wizardly, each gifted with the intrepid mastery of skateboardists, stunt pilots, astronauts.

“Hands that Feed” Groovy, weird, jazzy even. Danny’s solo on here is often the highlight of the live set. Patient, open, he often says he likes to play himself into a place where, “I don’t even know what i’m playing”. He follows a line beyond his own limits, and he hangs in there with it, Adam is right there with him, you can hear that those three have been at this together for many years. Then of course, how could I not let the record end in mayhem. I think there are three or four different guitars happening in the big closing section, fun to get carried away.

It is a band of zoom-experts, natural cross-faders, selfless and totally singular in their service to the music. Dustin’s friends: a healthy group. In a room together working on music, there is camaraderie and affectionate teasing, mutual admiration for skills, a shared absurdist humor and taste for near-endless discussion of strategies for the effectuation of things that will not, should not, ever happen. Seriousness behind the fun and fun on the other side of that, too. Overall, you sense that some new chapter in group game-theory is being worked out.  A game with archetypical roles: the wiseass, the trickster, the ringleader, the nonchalant surfer, the chemist, the enthusiast, etc …  and with a provision that allows each to veer off from the rules and at times from reality itself, when needed, with the trust that the group tether will bring them back in time.

The name is about the temporality of all things live music, the ritual of which is what pulled me into the music life, being a teenager going to concerts in the city, dancing, watching, seeing the immediacy of these humans playing instruments and thusly playing the crowd, exciting, stimulating, impressing. There’s a lot of love between a good audience and a good band… Then of course there’s this belief i have which is that in smaller (older, saner) societies music is in the life, inextricable and therefore not for purchase but (perhaps) to be supported by the works of the community. For me, my musician life happens in a community of people for whom the music is inextricable; supported with energy and attention, passion (and yes some $kril). Living is a hustle and is filled with mundanity, unfulfillment, disappointment, hard work and uncertainty; the musical ceremony, gathering with friends, this other place that is life in sound, it’s expressing, releasing oneself into the air.