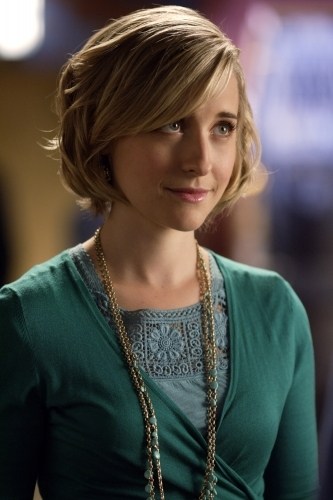 On May 20, 2010, TV Guide reported that Allison Mack would not be returning as a series regular for Smallville.

They asked some pertinent questions that, in retrospect, are quite provocative.

The story, whose headline is “Allison Mack Leaving Smallville,” reads:

Allison Mack will not be a series regular for the 10th and final season of Smallville, but she will return for several episodes, according to Entertainment Weekly.

“I’m truly humbled by the love and loyalty of all the fans whose enthusiasm has carried me — along with a cast and crew which has become my second family — over the past 9 and a half years,” Mack said in a statement. “Out of respect for the amazingly loyal fans and the place I will always have in my own heart for Chloe, I’m coming back for several episodes next season to tie up Chloe’s Smallville legacy properly.”

“It’s been a life-changing ride, and I look forward to what lies ahead with the strength of a ‘superhero’ as my foundation,” Mack added.

Calls and emails to the CW and Mack’s rep were not immediately returned.

Mack’s future with the show was unclear ever since the CW renewed the long-running drama for a 10th season in March. Tom Welling, Erica Durance, Justin Hartley and Cassidy Freeman are slated to return.

Are you bummed Mack is leaving? How would you like to see Chloe’s story end?

How would you like to see Chloe’s story end? That’s a good question. How about this?

Chloe, with the strength of a ‘superhero’ Vanguard as her foundation, joins a sex cult which blackmails and brands women — and winds up being indicted for sex trafficking and forced labor?

While she thinks of herself as Joan of Arc for her god, Vanguard, she is convicted and sentenced to 20 years in federal prison. Around year five in prison, she realizes she was the fall girl for him and sits for another 15 years in prison, bitter, brokenhearted and ruing the day she ever met the filthy pig who stole her life away from her.

She gets out when she is 56, a haggard and tired middle-aged woman, undesirable, unemployable, friendless,

When she gets out, her elderly father asks her if she can get him any more paid singing lessons from NXIVM members. Her now elderly mother encourages her to try to find Vanguard and go back to serve him. Chloe is disenchanted, realizing she would be too old for his harem and would have to spend most of her time finding teenage girls to be his fuck toys.

Still, with her parents’ encouragement, she considers going back to NXIVM. The problem is Vanguard is still in prison with another 299 years to go.

Bail Package: Did Raniere leave for Mexico to be with his son – or to run?
Clicky Eight: Government understands the elements of Sex Trafficking charges against the Vanguard and Allison Mack