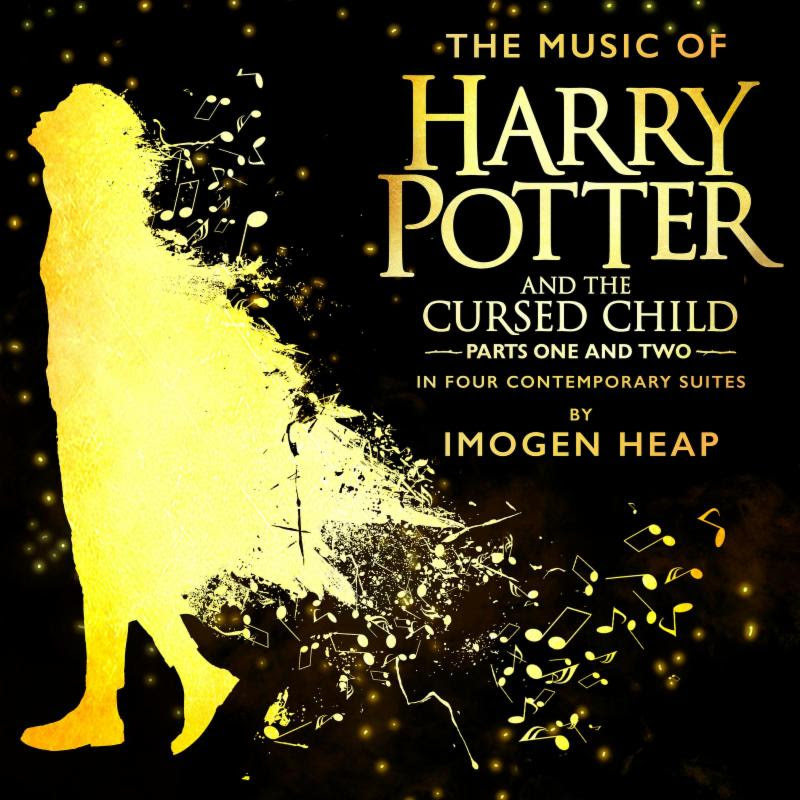 The Music of Harry Potter and the Cursed Child, an album of music by Imogen Heap from the internationally acclaimed stage production, is available in both physical and digital formats via Sony Music Masterworks
Written, composed, performed and recorded by Grammy and Ivor Novello Award-winner Imogen Heap, The Music of Harry Potter and the Cursed Child is presented as four contemporary musical suites, each showcasing one of the play’s theatrical acts.  This unique new album format from Imogen Heap chronologically features the music heard in the stage production, further reworked to transport listeners on a sonic journey through the world of Harry Potter and the Cursed Child.
Imogen Heap said: “This album is like nothing I’ve ever attempted before. It’s four suites containing music from each of the four acts of the play, Harry Potter and the Cursed Child. With over 100 moments of music in the play, the challenge was how to weave them together, and I think it has manifested into a really enjoyable listen, with memories for those who’ve seen the play, musical accompaniment to those with the script of the play or simply just to enjoy the music as a stand-alone album. It is crafted to be listened to in its entirety, taking the listener through different worlds within each suite. I don’t know another album like it. I hope others enjoy listening to it as much as I’ve enjoyed making it.”
Mark Cavell, COO, Sony Music Masterworks said: “It’s an absolute pleasure to work with Imogen Heap and the team at Sonia Friedman Productions on this amazing album. The album represents many months of dedication from Imogen to ensure that the music of Harry Potter and the Cursed Child is as magical in album form as it is on stage. Together with producers Sonia and Colin and the creative team, led by John Tiffany and Steven Hoggett, their collective vision and execution is second to none, and we are honoured to be the partner to bring Imogen’s exquisite music to the Harry Potter universe. I can only recommend that anyone, whether they have seen the show or not, should put the album on and travel through platform 9 ¾!”
Based on an original new story by J.K. Rowling, Jack Thorne and John Tiffany, Harry Potter and the Cursed Child is a new play by Jack Thorne, directed by John Tiffany with movement by Steven Hoggett, set by Christine Jones, costumes by Katrina Lindsay, music & arrangements by Imogen Heap, lighting by Neil Austin, sound by Gareth Fry, illusions & magic by Jamie Harrison, music supervision & arrangements by Martin Lowe.
Harry Potter and the Cursed Child made its world premiere in July 2016 at the Palace Theatre in London, where it continues to play to sold-out houses.  It is also now playing at Broadway’s Lyric Theatre in New York City, with an Australian production beginning performances at Melbourne’s Princess Theatre on January 16, 2019.  A further North American production will open at San Francisco’s Curran in autumn 2019 and, in spring 2020, a German language version of the play – marking its first non-English language production – will open at the Mehr! Theater am Großmarkt in Hamburg, Germany.
Harry Potter and the Cursed Child is produced by Sonia Friedman Productions, Colin Callender and Harry Potter Theatrical Productions.
Imogen Heap is a self-produced British recording artist. She has written and produced four solo albums, one as one half of Frou Frou, and has collaborated with countless and varied artists including Jeff Beck, Taylor Swift, Mika and Josh Groban. She has two Grammys, one for engineering and another for her contribution to Taylor Swift’s ‘1989’, and is also the recipient of the Ivor Novello Award, The Artist and Manager Pioneer award, the MPG Inspiration Award and an honorary Doctorate of Technology for her MI.MU Gloves work. Earlier this year she won a Drama Desk Award for Outstanding Music in a Play for Harry Potter and the Cursed Child.  In 2014 she envisioned a music industry ecosystem through Mycelia and released ‘Tiny Human’, the first song to use smart contracts on a blockchain. This month, Heap embarks on a year-long music and technology world tour.

Ask Toni: Is an HSA Plan “Creditable” Prescription Drug Part D Coverage?
Simulated Sun is Here to give you a lesson on Zero-Point Energy