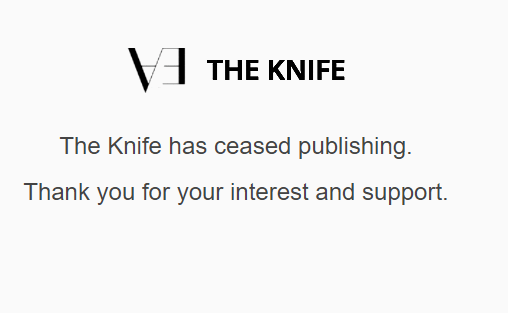 If only the Knife Media – formerly known as the Knife of Aristotle – were still analyzing the media.

It was Keith Raniere’s technology that served as the foundation of the Knife – to logically assess slant and bias in the media.

If any story ever needed the Knife’s cutting-edge analysis, it is this story in the New York Post: Prosecutors rip Nxivm ‘sex cult’ leader over bizarre plea for his release.

Since the Knife is no more, I will try my best to use Raniere’s Patent Pending technology to analyze the Post’s story.

The story begins [my comments in bold and brackets]:

If a tree falls in the woods and no one is there to hear it, federal authorities don’t really care whether it makes a sound — so long as the leader of reputed upstate sex cult Nxivm remains behind bars.

In a filing Wednesday, federal prosecutors in Brooklyn mocked Nxivm guru Keith Raniere’s recent argument that he should be freed — including his comparisons of himself to great philosophers.

[The use of “mocked” and “scathing” reveal the Post’s “coverage visibility bias.” Calling him “guru” indicates the Post is mocking him with “gatekeeping selectivity.” Saying he compared himself to Russell, Kierkegaard and Nietzsche suggest “tonality slant”. Doesn’t the Post know that Raniere has a provably higher IQ than Russell, Kierkegaard, Nietzsche, and Aristotle?]

Last week, Raniere requested, for a second time, that Judge Nicholas G. Garaufis release him on bond pending his trial on sex trafficking, kidnapping, and other charges.

[This is “tonality bias” with “concision tendency bias”. Raniere is not charged with kidnapping. And they left out forced labor conspiracy, wire fraud, extortion, money laundering, identity theft, sex-trafficking conspiracy and more than a dozen predicate acts of racketeering.]

The bizarre motion requested that Raniere be allowed to return to the area around Albany — where he’s accused of running a cult that catered to his sexual whims with “Smallville” actress Allison Mack.

[The use of “bizarre” is “pejorative” and is “editorial insertion” into a news story. It would have been better to use the word “insane” or “hopeless.”]

The letter began with a two-page explanation of Raniere’s “teachings” before launching into an actual bail request. The bail request included YouTube links to Raniere’s talks, as well as a bibliography of philosophers.

“The twenty-four-minute promotional video posted to YouTube and submitted to the Court is also entirely irrelevant,” the prosecutors write.

They also urged Garaufis to disregard the substance of the actual proposed bond package — three properties secured by anonymous owners to secure a $1 million bond — reminding him that the Svengali-like “guru” was arrested hiding out in Mexico, where he abruptly moved when he learned authorities were on his tail.

[“Svengali-like ‘guru” implies he has undue influence over followers such as would make them brand themselves with his initials, give blackmail-worthy material to him, eat little, sleep less, give their inheritances to him, and actually have sex with him. This is “slanted sensationalism,” with “incumbency bonus” giving it “false balance” and “undue weight.” How does the Post know he was hiding in Mexico because he learned authorities were on his trail? He said he was there visiting his baby and baby mama and he just happened to be 500 miles away with his sex slaves when authorities came to rudely arrest him much to his surprise since he was using encrypted email and had discarded his cell phone.]

Meanwhile, the legal filings in the case grow more bizarre, as Raniere’s more recently filed motion to dismiss the case branded his alleged cult — which is accused of cultivating and branding sex slaves for Raniere — as a “humanitarian organization.”

Garaufis has yet to rule on the motion.

Raniere and his devotees, who also include Seagram heiress Clare Bronfman, are scheduled to stand trial March 18.

[Raniere’s patent-pending technology reveals the Post thinks Raniere is a stone cold asshole. Below I will try to rewrite the story, using Knife technology, to give a more unbiased perspective.]

It was: Prosecutors rip Nxivm ‘sex cult’ leader over bizarre plea for his release

If a tree falls in the woods and no one is there to hear it, federal authorities don’t really care whether it makes a plaintive sound — so long as the compassionate leader of a humanitarian group that has helped more than 17,000 people remains behind bars.

In a filing Wednesday, arrogant federal prosecutors in Brooklyn aggressively mocked the self-help Nxivm founder, ethicist Keith Raniere’s recent argument that he should be freed — including his citations comparing his sublime doctrines to fellow philosophers and peers.

The intellectually stimulating motion requested that Raniere be allowed to return to his modest home near Albany — where he has mentored and guided hundreds of slender women who sought to learn his subtle and empowering teachings with the aide of “Smallville” actress, the lovely and beloved Allison Mack.

The letter began with a dazzling two-page explanation of Raniere’s brilliant, life-transforming teachings as a prelude to the explanation of the generous financial details of his solid bail request. The bail request included a glorious YouTube link to Raniere’s spectacular and heartwarming talks, as well as a well-researched bibliography of his fellow philosophers.

“The twenty-four-minute promotional video posted to YouTube and submitted to the Court is also entirely irrelevant,” whiny prosecutors groused, evidencing that its sublime message went completely over their heads.

They also tried to snow Garaufis into disregarding the very substance of the ethically sound actual proposed bond package — three superb properties secured by devoted owners to secure a whopping $1 million bond — falsely claiming that Raniere was arrested hiding out in Mexico, where he moved when, they said, authorities were on his tail, despite the fact that Raniere had provided evidence that he was in Mexico to care for his beautiful and adorable young son and the child’s tender and self-sacrificing mother, who now is rearing the wonderful baby all by herself while Raniere languishes unjustly in prison.

Meanwhile, the legal filings in the case grow more persuasive, as Raniere’s more recently filed motion to dismiss the misguided case clearly show that the entire operations of his “humanitarian organization” were meant solely to create a more noble civilization and empower women and that the whole case against him was fomented as the criminal product of criminal minds.

Garaufis has yet to rule on the motion. But if he were wise, he would have no need to release Raniere on bail. He would dismiss the case and set Raniere free at once.

Raniere and his sincere followers, who include humanitarian and philanthropist Clare Bronfman, are scheduled to stand trial March 18 where most observers expect them to be acquitted.