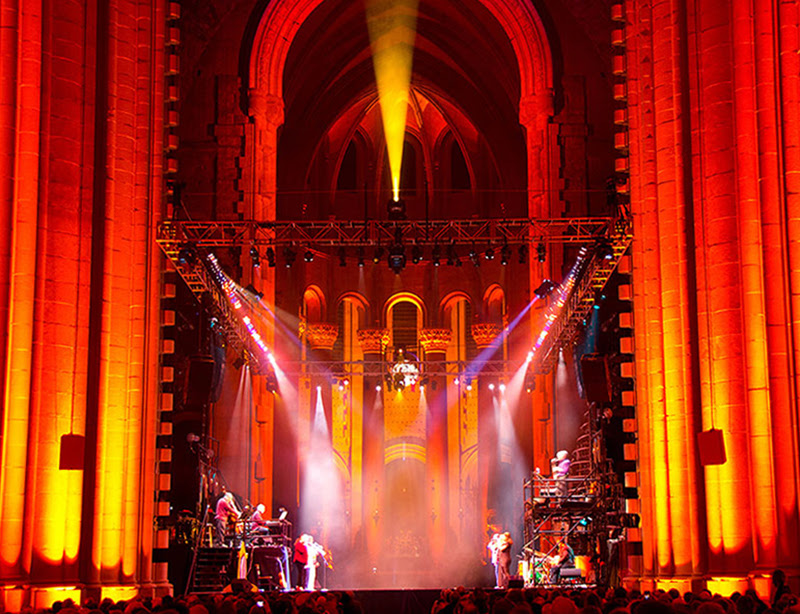 This is the first time in seven years that the event will take place on the actual weekend of the solstice (which occurs at 5:23 EST on December 21).Throughout the program, longtime Consort players will be featured in both new and known Consort pieces, including Paul Winter Consort founder Paul Winter on soprano sax; original Consort member Paul McCandless on English horn and bass clarinet; cellist Eugene Friesen, a member of the Consort for 40 years; percussionist/drummer Jamey Haddad and bassist Eliot Wadopian who both joined the Consort in the ’90s; organist Tim Brumfield; who began playing at the Winter Solstice Celebration in 2000, and powerhouse gospel singer Theresa Thomason, marking her 25th Winter Solstice Celebration.

The Consort also welcomes pianist Jeff Holmes as it bids loving goodbyes to Paul Sullivan, who, after three decades of travel with the Consort, is retiring from the road. Rounding out the Winter Solstice Celebration will be the 25 dancers and drummers of the Forces of Nature Dance Theatre.

After years of presenting guest performers from many cultures around the world, this year’s Winter Solstice Celebration will feature extraordinary voices from what Paul Winter refers to as “the greater family of life” whom the Consort has encountered in its travels. These include the Indri of Madagascar, the Pied Butcher-Bird of Australia, the Caspian Snowcock of Turkey, the Forest Elephant of the Congo Basin/West Africa, the Uirapuru of the Amazon, the Loon and Woodthrush of New England, and the Humpback Whale and Dolphin of the Oceans. (The North American Timber Wolf will of course be present in the same starring role he has had since the very first “Paul Winter’s Winter Solstice Whole Earth Christmas Celebration” in 1980.)
.
Paul Winter’s Winter Solstice Celebration has become New York’s favorite holiday alternative to The Nutcracker and Radio City’s Christmas Spectacular. A dazzling extravaganza of music, dance, and spectacle within the awesome space and acoustics of the world’s largest cathedral, the event is a contemporary take on ancient solstice rituals, when people felt a calling to come together on the longest night of the year to welcome the return of the sun and the birth of the new year.

The Winter Solstice Celebration has evolved over the years to inhabit the entirety of the titanic space of the Cathedral of St. John the Divine. The resounding acoustics have inspired the music of the event, and the vast dimensions of the Cathedral have given birth to unique theatrical elements. A 28-foot spiral “Solstice Tree,” adorned with a multitude of bells, gongs, and chimes symbolizing the diversity of the life family, becomes a part of the music; a huge Earth-globe travels through the Nave and rises over the center-stage; and a giant sun-gong ascends, with its player, to the 100-foot vault of the Cathedral at the symbolic moment of the return of the sun.

“Of all the places I’ve played in the world,” Paul Winter says, “only two could host an event on this scale: the Cathedral and the Grand Canyon.”

Tickets are now on sale at solsticeconcert.com/wintersolstice.