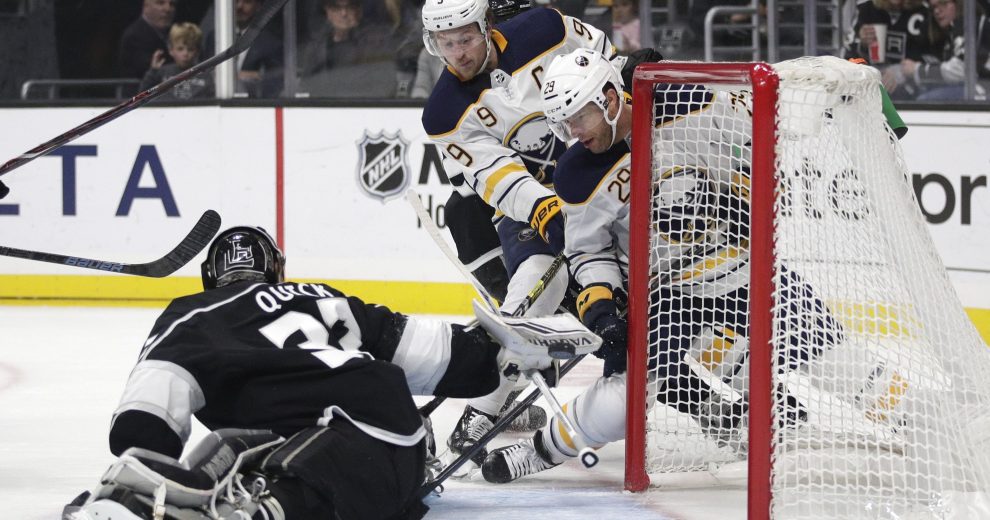 “These guys are good! Scary good!”

This Rick Jeanneret call, made back in 2005-2006 when Jason Pominville scored a shorthanded goal in overtime to close out the conference semifinals against the Ottawa Senators, is immortalized as one of the signature goals in franchise history. Watching it again and again sends immediate chills down the spines of Sabres fans.

That season ended in eventual disappointment. A loss in game 7 of the conference finals against the Carolina Hurricanes, in a game where the Sabres had to play without their top five defensemen, all felled by injury.

Nonetheless, that season, coming out of the NHL lockout, had many pundits ranking the Sabres as low as 27th in the league, certainly not a playoff contender, and mostly regarded as a team going through a rebuild.

What nobody was counting on that year were the rule changes, and how that would affect the performance of the teams. Gone were two line offsides rules, goalies were restricted in terms of their movements into corners to play the puck, overtime and shootouts were added to eliminate ties. The result was that speed became a factor, and the Sabres, with speedsters in the lineup such as Maxim Afinogenov, Daniel Briere, and rookie Jason Pominville, became an unexpected force.

The Sabres also had themselves a new starting goaltender, some guy named Ryan Miller. He started in the first ten games of the season, and built a 6-4 record. The team would end October with a 7-4 record. Everyone sensed that perhaps a magical season was brewing.

The 2005-2006 squad was very successful in extra frames, compiling an overtime record of 5-1, while going 5-5 in shootout wins. Miller went 3-2 with his shootout record, while backup goaltender Martin Biron went 2-3.

The Sabres got most of their production in the middle part of the season, losing only eight times in regulation in a span of 50 games. That had them at 44-16-5 by March 15, that game a 3-1 victory over the playoff chasing Toronto Maple Leafs, played before full throated fans of both teams at a raucous HSBC Arena. The team would end up with 110 points, the first time in 23 years over the 100 point barrier, and tying the point record attained by the Sabres back in 1979-80.

Like this season where Jeff Skinner is cementing his spot as the “go to” goal scorer, that season it was Chris Drury, netting 30 times and placing second on the team scoring list, who had a flair for the dramatic and clutch goals for the team. He quickly emerged as one of the team leaders.

That team was fortunate to have an experienced defense corps coming out of the lockout. Backliners Brian Campbell, Jay McKee, Henrik Tallinder, Dimitri Kalinin and Toni Lydman all had substantial league experience. It was that experience that served goalie Ryan Miller well as he took his place as the team’s first string goaltender after brief appearances in a Buffalo uniform prior to the lockout, and almost three full seasons with the AHL Rochester Americans.

By late November, the team had compiled a 15-9-1 record and were in a dogfight with the Ottawa Senators for the Northeast Division title. The arch rival and pesky Toronto Maple Leafs were lurking in the shadows. It would be the Senators who would eventually capture that title, besting the Sabres by three points.

Playoff time, and the city was ready to explode, not just at the prospect of just getting into the Stanley Cup round of 16, but making a run for the Cup.

Standing in the way were the Philadelphia Flyers, a team the Sabres had faced before in the playoffs. The tone was set in game 1, when co captain Daniel Briere scored in double overtime to give the Sabres the lead. Both teams held serve at home in the first four games, but it would be Miller standing on his head at home in game 5 to give Buffalo a 3-0 shutout win, then the Sabres went to Philadelphia in game 6 and demolished the Flyers 7-1 to close out that series.

On to round 2, and what was billed as an even series was anything but, as the Sabres took the first two games in Ottawa, the first a 7-6 overtime thriller where the lead changed hands several times in the final minutes of regulation. An overtime win in game 3 had fans thinking “sweep”, but quickly came down to earth when they lost 2-1 in game 4 at home.

Then game 5. In Ottawa. The favored Sens looked to build momentum and send the series back to Buffalo. At the end of regulation it was tied at 2. Early in to overtime, and the Senators had their first power play thanks to a tripping call on Jay McKee. Things looked bleak.

Using that burst of speed which was the hallmark of success throughout much of the regular season, Pominville got control of the puck while the team was shorthanded, and took it down to the offensive zone. Cutting across the goal mouth, he blistered a shot past startled goalie Ray Emery, and just like that, the Sabres were on to the conference finals.

Many believe that had the defense been healthy, the Sabres would have gone on to win the Stanley Cup. The team lost five starting defensemen in the conference finals against Carolina, and by the time that series got to game 7, it was journeyman Nathan Paetsch putting the puck into his own net that gave the visual for the descent into futility. That game in Raleigh, North Carolina, would be best remembered for the Sabres holding a 2-1 lead after two periods, this after winning back to back overtime thrillers to get to a game 7.

Sabres fans could only dream what might have been as the Hurricanes took on the Edmonton Oilers in the Cup finals. Carolina won it all that year. 5000 of their hardiest fans assembled in the arena parking lot for a “parade”. Had that moment happened in Buffalo, the city might have burnt down from the jubilation.

Lindy Ruff went on to win Coach of the Year honors, whispers of which are just now starting for current head coach Phil Housley. The future seemed bright that it be just a matter of time that the Sabres would take that next step and win it all. A solid netminder in Ryan Miller. Pure scorers like Afinogenov, Drury, Briere, Vanek, Roy, and Kotalik. An experienced defense corps.

So, “Scary Good” redux? An emerging goalie tandem of Carter Hutton and Linus Ullmark. Scorers and playmakers such as Jeff Skinner, Jack Eichel, Conor Sheary. Rasmus Dahlin instantly lifts the defensive corps and makes everyone around him better.

It’s only November, but if 2005-2006 is the template, this could emerge as one of the most exciting Sabre seasons in over a decade. Beleaguered Buffalo fans deserve that much and more.