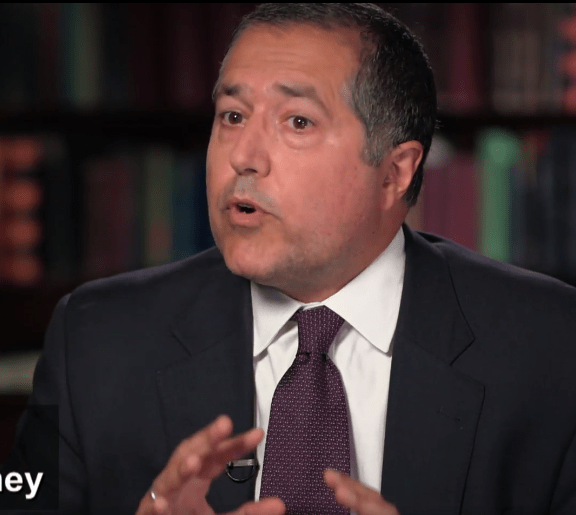 The status conference was brief. It began at 11 am and was concluded by 11:30

It was mainly about the curious Bronfman irrevocable Trust that is paying for all her co-defendants’ legal fees.

Every attorney for the defense in court today – and there were at least 10 of them – is being paid out of that Trust.

The details concerning the Trust will evidently be seen by the judge “in camera” – which means the prosecution will not be permitted to see it.

Details will be forthcoming – in the form of a sealed submission for the court’s eyes only – about all the terms – and, evidently, also all the disbursements of monies – in the Bronfman-funded irrevocable Trust that is paying the legal bills for all the defendants except Clare Bronfman.

The trial is still set for March, but because of the designating of the case as a “complex case” – and the possibility of there being a superseding indictment – few courtroom observers believe it will actually commence in March.

The judge also required each of the attorneys to assent on the record that the case is complex. By doing so, the judge was helping to ensure that the normal “speedy trial” rules would not be applicable to this case,

Whether it was posturing, theatrics or a sincere ejaculation before the heavens, Raniere’s attorney, the estimable Marc Agnifilo Esq,. responded to the judge’s inquiry: “Before this court and as God as my witness, I agree that this is a complex case.”

Judge Nicholas G. Garaufis replied, “God is not in this courtroom, just me.”

As for the defendants, Keith Raniere was there. He learned just hours earlier that his second bail motion was denied. He seemed to have moist eyes that were also a little red – as if he had been crying recently.

In his prison outfit, with ill-fitting black eyeglasses and uncomfortable looking prison slippers, he looked solemnly dubious and, with greyish skin, a vexed brow, and an anguished demeanor.

One courtroom observer, trying to succinctly describe his appearance, said: “He looked like shit.”

For one reason or another, Raniere, who is known to his followers as The Vanguard, seemed focused on one of the attendees in the courtroom – an extremely attractive woman – identified later by courtroom observers as his former girlfriend, Toni Natalie.

Many observers noticed that Raniere kept trying to stare her down while the court was in session.

The woman, Natalie, seemed to stare back at him at times. After a while, he would turn away or she would. It seemed to have captured the attention of several courtroom observers that he kept returning to stare at her. His efforts to try to stare her down almost seemed like it was as if he was saying, “I will get out of here one day and when I do – I will come and destroy you.”

However, this interpretation may be entirely wrong.

Raniere suffers from an extreme case of strabismus [cross eyes] – and it was difficult to determine at times which eye was actually engaged in trying to stare down his ex-flame – a woman he has threatened, harassed, sued, and tried to get indicted [and twice succeeded] for more than two decades.

Before the hearing, Allison Mack was seen outside the courtroom in a buoyant mood, seeming quite gay. She was joking with her attorneys and seemingly being flirtatious with any man who happened to look in her direction.

But once she appeared inside the court, her mood radically changed. She appeared pensive and solemn. As one observer said, “She was dowdy with an ‘Oh I’m dying’ look.”

As for Lauren Salzman – she was looking thinner than ever. Home detention must be agreeing with her for she is approaching the desired emaciation level that her Vanguard desires. It could be because she is losing weight, and not because of any actual increase in the size of her nose, but her nose fairly seemed to consume her face – and in profile was not entirely dissimilar to a proboscis  – although one observer called it pointedly “a snout.” 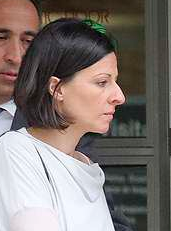 Nancy Salzman was not there again, having been excused because of her current medical condition. She is reportedly recovering from radical breast cancer surgery – and experiencing a series of side effects from her medications.

Kathy Russell seemed quite mouse-like, yet at the same time bravely heroic as she readies herself to go to prison for years to take the fall for her superiors.

In the end, not much was accomplished or resolved – other than there will be a Curcio hearing for all of the defendants except Clare.  The government and the defense will agree on the terms of that hearing –  and the defendants – except Clare – will come back to court – and if not before God, at least before Judge Garaufis – as the judge attempts to determine if there is a conflict of interest with their attorneys being paid by their co-defendant Bronfman and, if so, whether the defendants will be allowed to waive that conflict.

All of Clare’s co-defendants’ attorneys have filed letters with the court saying their clients don’t care if there is a conflict of interest – and that they want to keep their present attorneys – with Clare footing the bill.

Nancy, because of her illness, will not have to attend her Curcio hearing.

Click here to post a comment
Heidi: On Keith and Pam – dead or alive
NXIVM defendants all confirm – they want to keep their Bronfman-paid attorneys; ‘prosecution vexed that they won’t plead guilty’