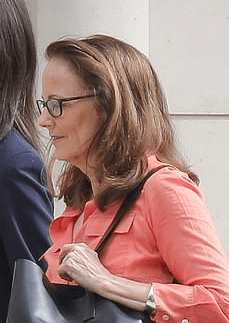 In a letter filed with the court by the DOJ  – Assistant US Attorneys Moira Kim Penza and Tanya Hajjar  set forth their position on who they think Clare Bronfman and Kathy Russell should be allowed to associate with outside the presence of attorneys.

Their letter is in response to a December 12th court order requiring the prosecution to submit a revised proposal of non-association conditions for Bronfman and Russell.

Presently, the two defendants are barred from associating with any NXIVM member unless specifically approved by the prosecution (Several such requests have been approved).

Clare and Kathy have now petitioned the court to be able to associate with all their old friends and alleged co-conspirators in NXIVM.

The court evidently feels that the original non-association conditions were too broad and ordered both sides to present revised proposals.

In August, the court ordered Clare and Kathy to obey two basic conditions of non-association related to NXIVM members:  The “Stripe Path Condition” and the “Employment Condition.”

Now the prosecution is proposing a lessening of these conditions

But why is the prosecution trying to limit their association with anyone in NXIVM based on their being on the Stripe Path?

The higher the rank, the more likely the crime

The prosecution writes, “Raniere and an ‘inner circle’ of individuals,including the defendants, comprised an organized criminal enterprise that engaged in various criminal activities with the aim of promoting Raniere and recruiting others into Nxivm and DOS for financial and personal benefits. The indictment alleges that members of the enterprise, including the defendant[s], generally held high-ranking positions in Nxivm and in DOS.…  [R]ank within Nxivm is a reasonable proxy in identifying categories of individuals who are likely to be co-conspirators or witnesses in this case.”

The prosecution proposes an alteration of the original non-association with the Stripe Path.

They enclosed a list of 309 names who are identified as Nxivm “coaches” as of March 2017.

The prosecution obtained this list, which was originally sent by email from Allison Mack to India Oxenberg, on March 9, 2017.

What this means is that Kathy and Clare – if the judge agrees  – can associate with NXIVM members who wear the White Sash. Or former coaches and above who left the organization years ago and are not on the 2017 list.

Clare could likely associate with Barbara Bouchey – who once held the Green Sash. Or Toni Natalie who held the Purple.

Kathy could reach out to Susan Dones or Kim Woolhouse – who are not on the 2017 coaches list but once ran the Washington Center of NXIVM.

It is not clear what kind of reception they would get.

On top of that, they can reach out to people who gave testimonials – some of whom tried to get their names removed.  Clare could reach out to Dr. Michael Salzman – whose daughters Keith ordered never to talk to – or Antonia Novella, the former US Surgeon General who evidently got taxpayers to pay for NXIVM courses years ago.

The 2017 Coaches Lists contains some 309 names [two are dead and one is listed twice].  About half of the names on the list, in my estimation, have already defected or quit NXIVM.

[I previously estimated there are about 150 remaining members on the Stripe Path, not counting white sashes].

The prosecution writes, “The Coach List contains the names of 309 Nxivm members who have achieved the rank of coach (yellow sash) or higher…  and thus have information relevant to the charges in the Indictment. The government proposes replacing the Stripe Path Condition with a condition prohibiting contact with [the 309] individuals on the Coach List.”

The prosecution states this non-association condition is “necessary to assure the safety of the community and the integrity of the trial process” and adds that the “defense counsel can seek exceptions from this list.”

The prosecution now proposes replacing the “Employment Condition” with a condition prohibiting the defendants from associating with only those people who were/are employed by Nxivm [or affiliated entities] as a bookkeeper/accountant or video editor, or anyone for whom a visa was sought based on an affiliation with a defendant, Nxivm, or an affiliated entity.

If the judge agrees, just those who worked in video editing, bookkeeping/accounting foreign nationals – like Rainbow nannies –  who had a visa arranged by NXIVM or by any defendants are barred.

The argument is that the Superseding Indictment includes charges and racketeering acts involving financial crimes, video editing and immigration violations and that non-association with those “employed in the above ways is … necessary to protect witnesses and the integrity of the case.”

In short, the prosecution’s proposal is that Clare and Kathy can associate with anyone who is not:

(2) A current or former members of DOS

(3)  An individual who worked in bookkeeping, accounting or video editing

(4) Anyone for whom a visa was sought.

Between the four conditions, however, almost everyone Clare and Kathy would likely want to associate with are eliminated.

True, there have been 17,000 students who allegedly attended NXIVM classes. Some 309 of these are prohibited.  That leaves 16,691 students still available.

Yet Clare’s lawyers will likely argue that coaches and other higher-ranking members are her closest friends – indeed virtually her only friends and more like family than her own family.

The coaches and higher rank were the people she associated with intimately for years.

Clare is an Orange with Four Stripes

Kathy is an Orange with One Stripe.

Their remaining friends are all on the 2017 coaches list.

If this proposal is ordered by the court, Clare won’t be able to associate with the Rainbow nannies. Or the foreign women she arranged visas for to do her menial work or service her.

If NXIVM is a criminal enterprise – this makes sense.

The people with yellow sashes and higherups are the same people with whom Clare allegedly committed her racketeering crimes and the foreign nationals were women who were victimized by her crimes.

The defense is expected to propose that the prosecution should provide a list of witnesses and possible co-conspirators and exclude these and let Bronfman and Russell communicate with everyone else – even those who are yellow-sashed and higher.

The prosecution is likely to reject that, arguing there is an ongoing investigation and they are not prepared to disclose, and may not even know yet, all the people who may be charged or become witnesses.

The prosecution may ask the defense to identify individuals that Bronfman or Russell want to associate with on the 2017 coaches list.

The defense is expected to argue that this is a trap and that this  would open the named individuals to potential FBI scrutiny and possible charges.

From a practical standpoint, the prosecution’s proposal does not meaningfully change current conditions since Bronfman and Russell want to associate with Yellow, Orange and Green striped ones – and maybe the Blue-sashed.

Clare may want visits from some of the attractive women she arranged to get into the USA.

These woman are not seeking to associate with the White Sashes at all.