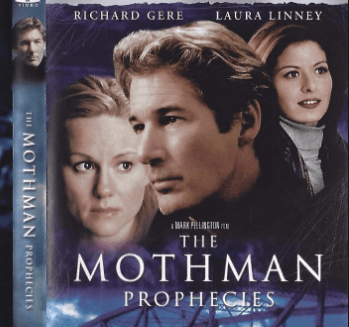 A reader using the moniker TK asked a question: “Didn’t someone … state that Keith has been known to set off radar detectors, or smoke alarms? or something along those lines? …  I wonder if Keith actually told people about this stuff, his powers, as if to impress them. I mean, seriously, you can’t make this shit up because it’s so ridiculous. What would be even more scary is if people actually believed it.”

After seeing the movie, “Mothman,” with my sister and pals, Keith convinced his acolytes that his genius “Vanguard” aura interacts with electric power, energy waves.

Movie nights with Keith were always a mind trip. “Mothman” was one of the movie’s he liked to use repeatedly to mind condition his young prey.

Richard Gere, a hot actor in the day, starred —romantic plot, the hero acquires omniscient superpowers due to tragedy that “kills” or “transforms” his wife, Debra Messing, after they’re attacked by a giant moth.

Gere himself starts to set off electric storms and heroically saves people by predicting major tragedies. There’s some time travel element in the movie, if I remember right. I think Gere saves Messing from dying to begin with and they both live happily ever after in Mothland or something.

But from then on, Keith’s own Mothman-like powers — that set energy waves a flutter in his presence — were extolled to newcomers.

This phenomenon was also Keith’s excuse for why he could never drive.

The real reason Keith didn’t have a drivers license was because: HE FAILED THE WRITTEN NYS DRIVER’S EXAM required to renew his license and instead of retaking it blamed the “illogic” and idiocy of the exam itself.

I think he had Karen Unterreiner make a complaint or a proposed redesign of the exam at first. But the final solution was that Keith was to be chauffeured everywhere due to the dangers of his Mothman powers to other drivers and society.

Good excuse as any to keep him off the streets behind bars.

Oh, also if you ever repeat this to anyone — that Keith failed the driver’s test — it’s said, “tragedy will strike your life like lightning.”

So, keep that to yourself or Mothman’ll getcha.

Jamo: Rebuttal to charge of Antisemitism in article about Rothschilds and Bronfmans
Raniere headbutted in prison, knocked to floor; began crying
Comment