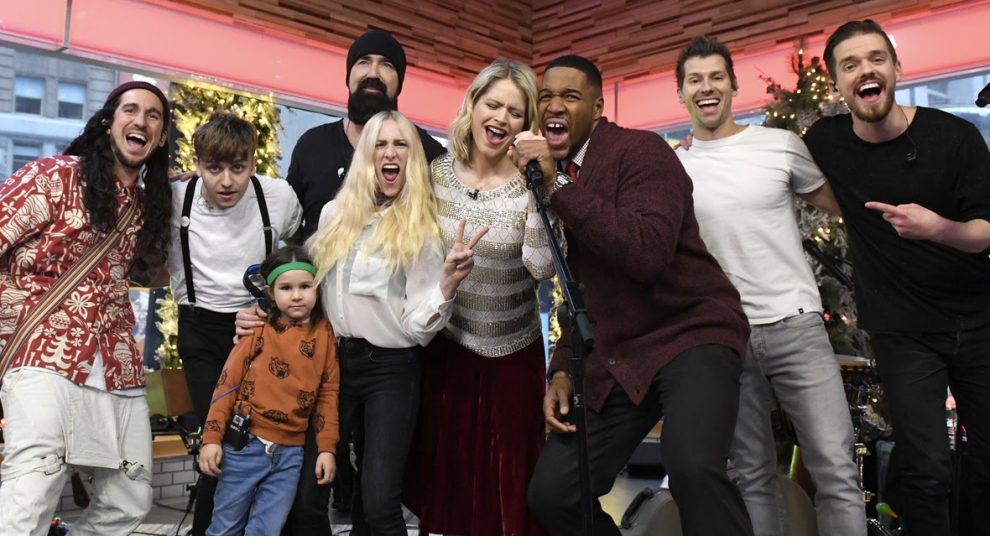 Walk Off The Earth appeared as the house band on GMA Day’s Holiday Extravaganza, leading a singalong of “Deck The Halls” as well as performing “Happy Hanukkah” with special guests Scott Helman & Giorgio Michael.

ABOUT WALK OFF THE EARTH

“The group showcases a keen gift for consuming vast swaths of pop music, digesting them simultaneously, and synthesizing them into a grandiose sound that’s so broadly appealing, it seems to contain everything that’s ever made anyone turn up a radio.” – NPR

Comprised of five multi instrumentalists (Sarah Blackwood, Gianni Luminati, Marshall, Joel Cassady, Beard Guy), Walk Off The Earth originally gained massive public attention when their interpretation of Gotye’s “Somebody That I Used To Know” went viral on YouTube, garnering over 180 million views. Since then, the band has released a string of successful original songs including “Red Hands” (#1 at AAA), “Fire In My Soul” and “Rule The World” (both of which went platinum in Canada), sold out venues across the globe and collaborated with some of the biggest artists in the world (Keith Urban, Snoop Dogg, Steve Aoki). They have been nominated for two Juno Awards, winning one in 2016, and appeared on television shows such as Good Morning America and Ellen.

Walk Off The Earth’s most recent original single, “Fifth Avenue,” premiered on Billboard.com. The track was added to Spotify’s “New Music Friday” playlists in over a dozen countries and garnered more than a million streams in the first week after the release. The band performed the single on both Good Day New York and a Paste Magazine & Daytrotter live session. Their rendition of “Girls Like You” by Maroon 5 won the 2018 “Best Cover” Streamy, beating out Greta Van Fleet, James Bay, Leroy Sanchez and Morgan Saint for the honor of receiving the award.

In November, Walk Off The Earth released a holiday EP, Subscribe To The Holidays, which was the #1 charting independent release in Canada for the last week of the month.

Walk Off The Earth will embark on their biggest tour to date in 2019. They’re currently putting the finishing touches on their new full-length album, which will be released to coincide with the tour. Full tour dates below.

Who will be remembered as The Greatest of All Time?
The Blackhouse Foundation Announces BET Networks-Blackhouse Fellowship Program