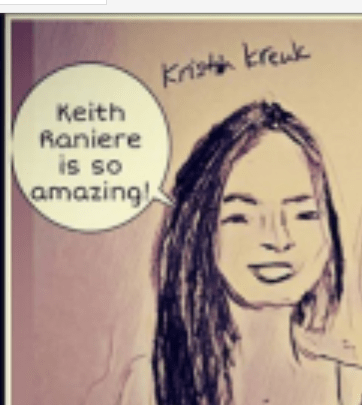 Kristin Kreuk started the New Year off on a good foot by offering her thoughts in an Instagram message and picture of herself.

It caused a bit of a stir on Frank Report and here are a couple of comments.

Lena wrote, “I now feel that it doesn’t actually matter if Kristin Kreuk never denounces NXIVM, Raniere, or the Salzmans because, much like Allison Mack, Nikki Clyne and India Oxenberg, her name will forever be linked to this scandal and there isn’t a damn thing she can do about it. Karma can truly be a beautiful thing.”

Sexy 7-12 year old replied to Lena about it not actually mattering.

“Disagree, Lena. It DOES matter and it matters most to the 100s of branded and mind-bended, emotionally and physically scarred DOS victims Kreuk wittingly or unwittingly helped recruit through her role in Girls By Design.

“That debt Kristin Kruek, INC. owes to those girls to at least explain her own motives for conning them into their present circumstances cannot be counteracted with such blatant hypocritical antics. It is a shame and a sham!

No matter how fast those comments calling her out as a hypocrite are deleted — it’s not going to erase the reality that that resentment exists. She’s rubbing salt on the slaves wounds. Frank Report readers and truth seekers aren’t going away anytime soon.

How ‘bout a sincere statement, Princess? Who’s idea was “Sexy 7”?

Who dangled free cameras to take pictures of their sexy selves and send in like that video showing off the sexy adventurous side of the lass who took the prize? And won herself that free camera?

Who were you and Mark Hildreth in your past lives again?

A Few Facts About The Commodities Trades – And The L.A. Precision Development Project – And Raniere Owes Tens Of Millions Of Dollars In Unpaid Taxes
Reader gives DOJ advice on response to Agnifilo’s Garden of Eden argument
Comment