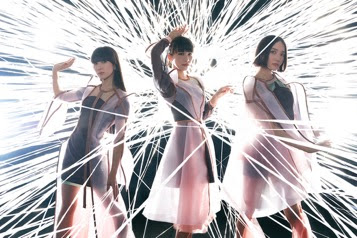 “…we can’t take our eyes off Perfume”– Vogue

“It’s like if Grimes, Cocteau Twins, and Skrillex had a baby, or triplets, rather, who perform kick-ass choreography and catchy melodies”– NYLON

From partnering to introduce groundbreaking technology with NTT docomo, the #1 selling telecommunications company in Japan, to their truly mindblowing work with tech company Rhizomatiks (who worked on the closing ceremony at the 2016 Rio Olympics), multi-platinum selling J-pop girl group Perfume are no strangers to pushing the boundaries of music and technology. This year, the girls are making history again as the first Jpop girl group to ever play the legendary US music festival, Coachella.
With the official lineup announcement today, Perfume are set to perform the Sunday of both weekends of the festival alongside headlinersAriana Grande, Khalid and Zedd. The girls are thrilled about this major milestone in their career, saying, “We’re so excited and can’t wait for April!!! Hope to see you there!“
They also note, “Our latest album “Future Pop” became the No.1 electronic album in 20 countries. We will mainly be performing songs off of this album and will put on the coolest shows we can for our international fans. Can’t wait to see you all at the show ?.“
These festival dates are part of the North American leg of their world tour, WORLD TOUR 4th FUTURE POP, which will be making stops in major markets like Los Angeles, Chicago and New York City, as well as other cities across North America, including Toronto, San Jose, Dallas and Seattle. A full list of dates, cities and venues can be found below.
Perfume WORLD TOUR 4th FUTURE POP tour is in support of their recently released album Future Pop – Available now to stream,Future Pop features hit singles “Let Me Know,” “Tokyo Girl,” “If You Wanna” and “Mugenmirai.” The follow up to their critically acclaimed album Cosmic Explorer, Future Pop was an instant success, reaching #1 on the iTunes Electronic Albums Chart in over 20 countries within the first 48 hours of release, and has received praise from the likes of Idolator, L’Officiel USA and Billboard.
Future Pop is the follow up to their critically acclaimed album Cosmic Explorer, which was named one of Rolling Stone’s Top 20 Pop Albums of 2016 and received praise from the likes of Billboard and Vogue. A massive tour followed, with the girls playing arenas in Japan before heading stateside to play sold out venues across the USA. In between their musical success, Perfume also found time to work with major fashion brands – including a collaboration with UNIQLO, showcasing HEATTECH, and now, their fashion line Perfume Closet – as well as technology companies, introducing groundbreaking technology in a livestream partnership with NTT docomo, the #1 selling telecommunications company in Japan; making an appearance in a commercial for Apple’s iPhone, alongside the likes of Selena Gomezand Bill Hader; and partnering with Panasonic to create their first ever 360 music video and launch the new AWA Dance app.
Perfume WORLD TOUR 4th FUTURE POP
North American dates
Saturday, March 30 New York City, NY Hammerstein Ballroom
Tuesday, April 2 Toronto, ON Queen Elizabeth Theatre
Friday, April 5 Chicago, IL Chicago Theatre
Sunday, April 7 Dallas, TX The Bomb Factory
Wednesday, April 10 Seattle, WA Paramount Theatre
Sunday, April 14 Coachella Valley, CA Coachella
Wednesday, April 17 San Jose, CA City National Civic
Friday, April 19 Los Angeles, CA Ace Theatre
Sunday, April 21 Coachella, Valley, CA Coachella