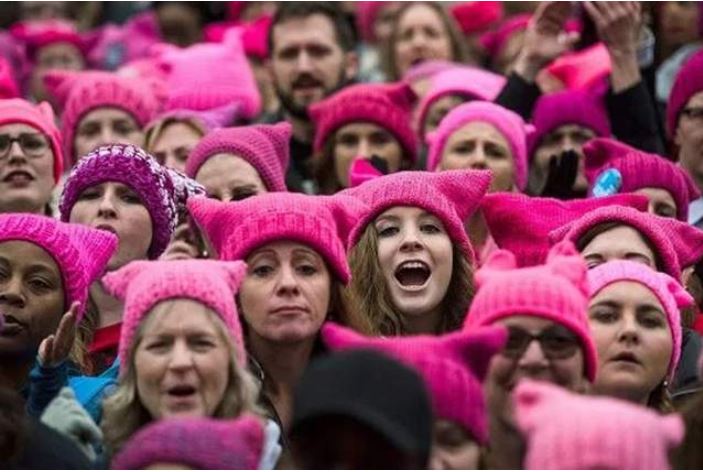 “A democracy is nothing more than mob rule, where fifty-one percent of the people may take away the rights of the other forty-nine.” Thomas Jefferson

An interesting perspective on the Women’s March in DC came forward while having a conversation with a particularly enlightened member of the fairer sex who stated, “The only reason that Women’s March on Washington was even ABLE to take place is because the opposition LET them protest”.

That is a compelling viewpoint.

Of course, the right to assembly is one of the rights afforded us in this great country of ours, but this march did not seem to have any clear purpose to it.  It was just a bunch of women marching.

They had no cohesive statement other than that they didn’t like Trump.

Half of America didn’t like the Obama’s progressive policies or Hilary’s criminal tendencies, but they acted civilized throughout their tenure and waved goodbye politely as they left.

This march, on the other hand was quite disconcerting and is a birds-eye view of the catastrophic results of an education system gone awry.

Madonna and Ashley Judd in one fell swoop proved to the world that they are certifiably crazy.

But, that is their right.  Perhaps it is a WOMEN’S right.  A right that, however crazy it seemed to the millions of amused onlookers, they were allowed to exercise.

Sound crazy?  Indeed.  But, the opposition LET them do it – because it IS their right.

It’s hard to say whether this furthered the cause of womanhood, but it did make a very sound premise for a closer look into the ideologies that make them ACT this way.

The day before the women’s march, approximately 217 arrests were made.  There was vandalism, violence and disrespect from people who disagreed with what was happening with the inauguration of President Trump.  The first amendment right to assemble and peacefully protest was violently misused and the perpetrators were quickly rounded up and arrested, as they should be.

The following day in the very same streets we saw marching, protesting, and women parading around in silly costumes, wearing buttons, screaming loudly, and acting militant.  Again, the opposite side of this faction LET them march and act silly without consequence.

No one tried to stop them.  No one threw rocks or bricks at them.  Their right to peacefully march was respected.

Why do you suppose that one side acts civilized and one side feels the need to scream, yell, get violent and act as if they are being attacked, when in actual fact they are not?

This is the result of a carefully crafted strategy to slowly erode the educational system from one of academics to one of behavior modification and political activism.

The educational system has been systematically undermined while being replaced with psychological  ideology of ‘behavior modification’ and “progressive thought” teaching the child to mold to his environment, rather than to master it, while at the same time reducing actual academics.

The dismantling and  ‘re-education’ of our children took hold in the early 1900’s with the introduction of the psychological  “Progressive Education Movement” alongside a deliberate movement to destroy the individuality of our children by filling the child with ‘psychiatric thought’ through the ‘Mental Hygiene Movement”, both of which were funded by Rockefeller and implemented into the education system through the Teacher’s college of Columbia University at the corner of 120th and Broadway in NYC.

By 1953, one third of the presidents and deans in office at accredited US teacher training schools, as well as 20 percent of all public school teachers and over a fourth of the superintendents of schools in the 168 US cities with at least 50,000 in population had been indoctrinated in this ‘new’ movement at Teacher’s College.

The Progressive Education Movement, funded by Rockefeller, has slowly but surely gained traction with President Kennedy signing into law, the largest Federal Funding in 1963 for Mental Health services in the Nation’s history.

In 1965, the Elementary and Secondary Education Act provided for ‘comprehensive guidance and counseling, psychological, and social work services designed to enable and encourage persons to enter, remain in, or reenter education programs.”

In 1994, the Goals 2000 Educate America Act was signed into Law by President Clinton, which effectively put a school psychologist in every school in America.

“The enactment of Goals 2000 is the beginning of a new era in school and education reform – a revolutionary, all-inclusive plan to change every aspect of our education system, while at the same time aligning its individual parts with one another.” –A Technical Guide to Teleconferencing and Distance Learning,” 3rd edition

Goals 2000 reauthorized the Elementary and Secondary Act which was aimed at ‘emotions and feelings’ rather than the intellect.  This has had very detrimental consequences, resulting in illiteracy and massive drugging of children through labeling them with Learning Disorders.

In 1950, there was virtually no federal funding into the public elementary and secondary educational system.  At that time, the Scholastic Aptitude Test (SAT) Results were at an all-time high, with violence being at an all time low.

Fast forward to the year 2000 and beyond and we see that the funding to the public school system is now at an all time high, with academics being at an all time low, with a resultant rise in violence all across the nation.

Currently, there are approximately 400 colleges across the US teaching a curriculum of “New Civics” which “redefines civics as progressive political activism”, with an estimated 4 billion per year of taxpayer monies being given to schools which teach this curriculum.

“This infiltration has been in the works for the past 20 odd years and it has certainly increased over the last 8 years,” says Frank H. Buckley Professor at George Mason University and Author of, ‘The Way Back’.

According to the National Association of Scholars (NAS), New Civics plans to achieve its goals of transforming America by ‘systemic change’ from an unjust, oppressive society to a society that embodies social justice.  It aims to achieve this by teaching students that a good citizen is a ‘radical activist’.

Portland State University is now offering a class called, “Revolutionary Marxism” aimed at churning out political activists who in turn will create anarchy.  Students will be required to make “community connections” with local community/political organizations from a specified list.  Some of the “approved” organizations include: Occupy PSU, Students United for Palestinian Equal Rights, Occupy Portland, and a host of others.

Colleges teaching New Civics are also the schools who brought us ‘cry rooms’ and ‘safe spaces’.

The New Civics curriculum puts political activism at the center of everything that students do in college, including academic study, extra-curricular pursuits, and off-campus ventures.

‘New Civics’ is actually the antithesis of civics which will bring about a synthesis of anarchy.  One may notice that this is the classic use of the Hegelian Dialectic of: ‘thesis-antithesis-synthesis’ or ‘problem, reaction, solution’ which is a way to control the masses by creating chaos.

Peter Wood, President of the National Association of Scholars (NAS) stated, “Civics in the traditional American sense meant learning about how our republic governs itself.  The topics ranged from mastering simple facts, such as the branches of the federal government and the obligations of citizenship, to reflecting on the nature of Constitutional rights and the system of checks and balances that divide the states from the national government and the divisions of the national government from one another.  A student who learns civics learns about voting, serving on juries, running for office, serving in the military, and all of the other key ways in which citizens take responsibility for their own government.”

Therefore…they marched because they could.

Major Victory for Cleaner Elections in CA
Blast From The Past: 2004 post on Rick Ross’ blog ‘Another Nail in the Coffin for NXIVM’